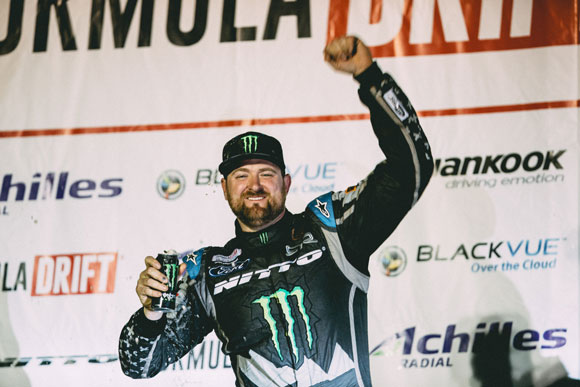 Cypress, Calif. (May 10, 2016) – Nitto Tire U.S.A. Inc., a leading manufacturer of off-road and street performance tires, is excited to announce that Team Nitto driver Vaughn Gittin Jr. has once again claimed victory at Formula DRIFT’s “Road to the Championship” at Road Atlanta. This marks the first time that Gittin has completed a “perfect weekend,” sweeping both qualifying and the race, in his career.

The second race of the 2016 Formula DRIFT season was held at the track where the series first began 13 years ago – Road Atlanta. A favorite among drivers and spectators, Road Atlanta offers one of the most dynamic and challenging courses of the series combining high speed entries with decreasing radius corners and fast transitions that test the drivers, the cars, and their tires. At this year’s event, Vaughn Gittin Jr. laid down a perfect qualifying run that earned him the number one spot in the Top 32. The next day Gittin put down a series of flawless runs and emerged victorious from the Top 4 where he squared off against two other past champions in one of the closest competitions of the season. Vaughn’s performance also helped catapult him into the lead in the 2016 series points championship after the former points leaders were knocked out of the first round of competition.

Vaughn Gittin Jr.’s win at Road Atlanta marks the first race win for Gittin’s new 2016 Monster Energy Nitto Tire Ford Mustang RTR, validating all of the hard work and extensive testing that has gone into it since it was first teased last year. It also marks the third year in a row that a Team Nitto driver has won the Atlanta race, solidifying the venerable Nitto NT05 tire, the tire to beat at this venue. Video of Vaughn’s qualifying run also set virality and viewership records on Formula DRIFT’s Facebook page, garnering over 2.3 million views and earning more than 25,000 likes, 28,000 shares, and 2,900 comments in the two days since its launch.

“Everyone at Nitto couldn’t be more proud of our team of drivers, their dedication to the sport, and desire to constantly improve,” said Harry Kong, Brand Publishing – Events & Motorsports for Nitto Tire. “We know that Vaughn Gittin Jr. has been working hard on the development of this new car and we have been honored to be a part of the RTR team that made it happen.”

The next race of the 2016 Formula DRIFT season will take place on June 3-4, 2016 at Orlando Speed World in Orlando, Florida. For more information about Formula DRIFT, visit www.formulad.com, learn more about Nitto-sponsored drivers at www.nittoracing.com and complete details on Nitto tires can be found at www.nittotire.com. Join Nitto Tire on Facebook at www.facebook.com/NittoTire and on Twitter at @NittoTire. 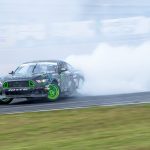 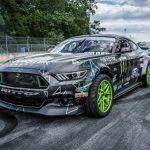 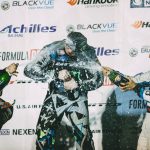 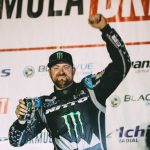