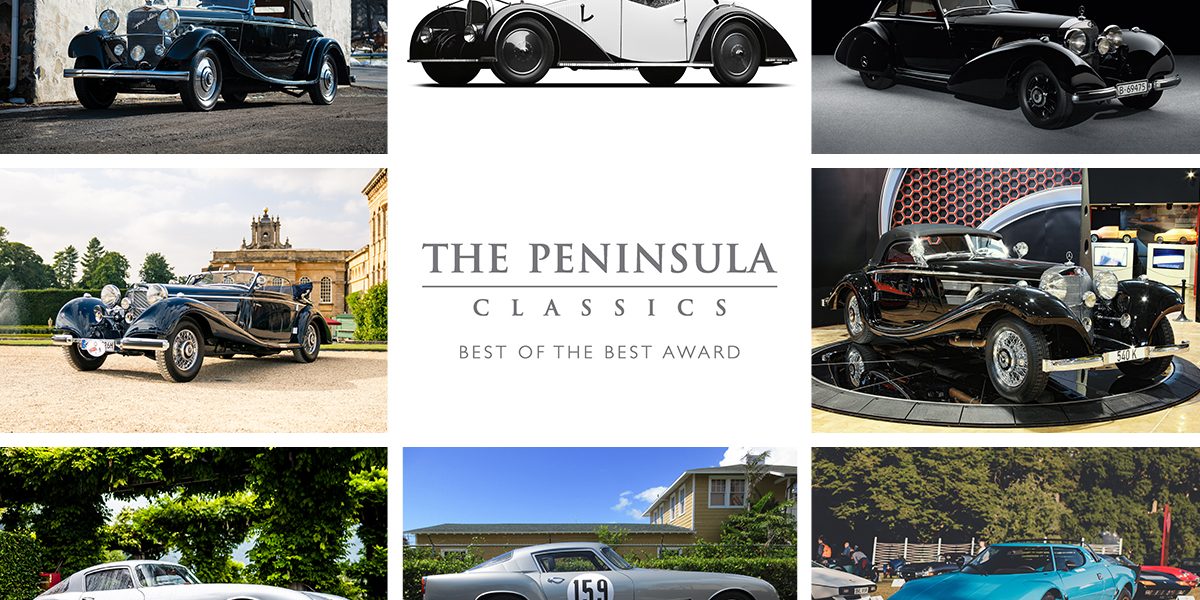 (21 June 2022) – The Peninsula Hotels, whose global hospitality brand has epitomized glamour and luxury for nearly a century, recently announced its eight finalists for its preeminent honor, The Peninsula Classics 2021 Best of the Best Award. In its seventh year, the prestigious accolade identifies the world’s most exceptional classic car from a select group of vehicles that have won the highest awards at the previous year’s major concours events. Hosted on the beautiful grounds of the Quail Lodge & Golf Club along the California coast, the awards celebration will take place on Sunday, August 14, 2022.

Included among the elite group of finalists is the 1956 Ferrari 250 GT Berlinetta Competizione that won the coveted Villa d’Este Best of Show trophy. One of nine built, the beautiful V12-powered 250 GT was raced in the famous Mille Miglia five days after its delivery, along with a handful of hill-climb events. Another unique Ferrari selected as a finalist is the 1957 250 GT Berlinetta Tour de France, originally purchased by French racer Pierre Noblet. Raced extensively between 1958 and 1960, the car was purchased for a mere $1,500USD in 1975 before being extensively restored and winning Best in Show at the 2021 Cavallino Classic. Another contender this year is a 1974 Lancia Stratos HF Stradale, winner of Goodwood Cartier Style et Luxe Concours d’Elegance and one of 500 road-going cars required for homologation to compete in the World Rally Championship. The Stratos was painstakingly restored by Carrozzeria Dino Cognolato and is one of the finest surviving examples of the striking Italian sports car.

Three variants of the 1938 Mercedes-Benz 540 K have also been selected as finalists. The sleek 540 K Autobahn-Kurier that won Best of Show at the 70th Pebble Beach Concours d’Elegance was initially built for the speeds of the Autobahn and is the only one of its kind in existence. The 540 K Spezial Roadster is an exquisite example of German engineering and luxury, featuring a disappearing top, suicide doors, and elegant lines. It was crowned Best of Show at the 2021 The Quail, a Motorsports Gathering. The 540 K Cabriolet A, with its supercharged inline eight-cylinder engine, was one of the few 100-mph road cars of the 1930s; it recently won Best in Show at the 2021 Salon Privé.

Another Best of the Best finalist the 1926 Suiza H6B Cabriolet, an elegant car with a colorful history. Its owners have included the King of Tunisia, the founder of the 12 Hours of Sebring, and a postman from Long Island; in 2021, it won Best of Show at the Amelia Island Concours. Another rarity among the selected finalists is the 1934 Avions Voisin Type C27 Aérosport Coupe, one of only two Type C27s ever built (the other being a roadster). The Coupe was discovered being sold for scrap before being meticulously restored in 2004 by Dominique Tessier, who constructed a new body using just three photos of the original car for reference. The prestigious Best of Show was awarded to the C27 at the 2021 Concours d’Elegance at Hampton Court Palace.

“This Award recognizes the pinnacle of automotive excellence,” said Bruce Meyer, co-founder of The Peninsula Classics Best of the Best Award. “The eight finalists this year are superb examples of classics from across the globe. Our world-class judges not only look at their original engineering and design excellence, but also consider the enormous effort and exceptional craftsmanship involved in their extensive restorations before selecting the best.”

The Peninsula Classics Best of the Best Award selects finalists from an elite group of iconic classic cars that have won major awards at the previous year’s foremost concours events. Created in 2015 by The Hon. Sir Michael Kadoorie, William E. Connor, Bruce Meyer and Christian Philippsen the coveted Best of the Best Award is only bestowed to the finest and rarest classic cars after a rigorous appraisal by an esteemed panel of judges.

About The Peninsula Classics Best of the Best Award
Through a shared desire to celebrate the best of what defines the automotive world, The Hon. Sir Michael Kadoorie, Chairman of The Hongkong and Shanghai Hotels, Limited, launched The Peninsula Classics Best of the Best Award in 2015 with co-founders William E. (Chip) Connor, Bruce Meyer and Christian Philippsen. Each founder shares a common passion and appreciation of fine motor cars, the preservation of their heritage and immaculate restoration projects. The award, sponsored by The Peninsula Hotels, brings together the concours circuits’ elite ‘Best of Show’ winners from around the globe.