THE PETERSEN OPENS ITS DOORS AFTER MASSIVE REDESIGN 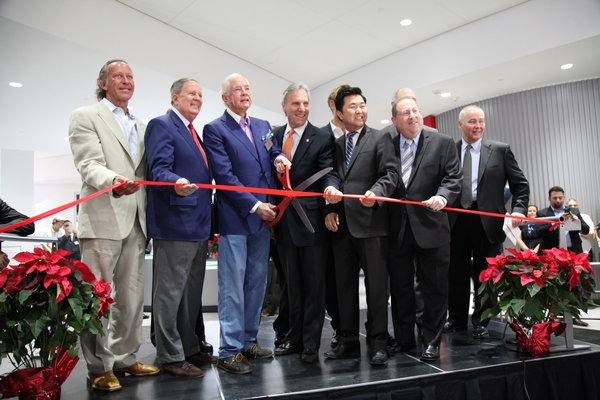 Los Angeles, Calif. (December 3, 2015) – After a 14-month total transformation that shrouded the exterior with ribbons of stainless steel and an interior packed with priceless vehicles and cutting-edge technology, the Petersen Automotive Museum at the gateway of Los Angeles’ famed Museum Row has reopened on time, on budget and packed with hundreds of new sites, sounds and experiences for visitors of all ages. Displays include some of history’s most breathtaking collector cars, championship winning race cars, groundbreaking art cars, famous Hollywood vehicles, seminal motorcycles and more.

“I am proud to announce that the new Petersen Automotive Museum is open on schedule, on budget and with interior and exterior designs that are even more stunning then the concept renderings – and that is a rare feat in both the architecture and museum worlds,” said Executive Director Terry Karges. “Thanks to the efforts of Kohn Pedersen Fox, Matt Construction, A. Zahner Company, The Scenic Route and our incredible Petersen team, we have transformed a building that was once an old department store into one of the most groundbreaking structures in Los Angeles. What’s inside is just as stunning, including a three-story spiral staircase that transports visitors through 25 galleries representing the history, industry and artistry of the automobile.”

The new Petersen Automotive Museum now has three full floors of content with 95,000 square feet of exhibit space. Guests are invited to enter the museum through either the parking structure off Fairfax or the new entrance on famed Wilshire Boulevard. There they can see several display vehicles in the David and Ginny Sydorick Grand Concourse, purchase tickets, and take an elevator to the third floor, where the experience begins.

The History Floor (3) will help visitors dive into nostalgia as they explore the multi-faceted history of the automobile. “Concept Cars as Art” in the Audrey and Martin Gruss Foundation Gallery shows what the future looked like in the 1950s and 60s, while the Hollywood Gallery includes the Batmobile, the Magnum P.I. Ferrari, several vehicles from Spectre – the latest James Bond movie, the Pontiac Aztec from Breaking Bad and other fan favorites. Also featured on the third floor is the pivotal exhibit “Southern California: A Region in Motion” in the Southland Gallery, presented by the Automobile Club of Southern California, which uses interactive video content to show how Los Angeles grew out, instead of up, like most cities.

As visitors descend the staircase to the Industry Floor (2), they can explore the diversity of automotive design and technology and see cars that have been modified for speed and efficiency. Learn what it’s like to work in the car industry and watch automotive design students as they design the next generation of transportation.

One of the most visually stunning displays in the museum is the Precious Metal exhibit in the Bruce Meyer Family Gallery presented by Rolex, a gathering of the world’s rarest and most exotic cars – all finished in silver. Just a few samples of the incredible vehicles in this gallery include a 1995 McLaren F1, the 1959 Chevrolet Corvette XP-87 Stingray designed, driven and raced by GM President of Design Bill Mitchell, the 1964 Aston Martin DB5 driven by James Bond in the movie Goldfinger, a stunning 1953 Fiat 8V Supersonic by Ghia, a 1967 Ferrari 625/250 Testa Rossa by Scaglietti known as one of the most winning Ferraris of its time, and a 1954 Mercedes-Benz W196 Streamliner driven by Juan-Manuel Fangio and Stirling Moss.

The Pixar Cars Mechanical Institute features a life-size Lightning McQueen and uses augmented reality technology to tech children how cars really work, starring their favorite characters from the Cars movies on Carspad tablets. At the Art Center College of Design Studio in the Mullin Design Gallery, visitors can watch students from the world’s most respected transportation design program sketch and mold the next generation of vehicular transport. The Industry Professionals exhibit in the Roeder-Harman Gallery presented by AIG in partnership with Grundy Insurance features interviews with the engineers, designers, marketers and executives who take cars from design to reality – all hosted by Jay Leno. The Alternative Power exhibit, presented by Landi Renzo, showcases the history and future of alternative fuel vehicles – from early 20th century steam and electric cars to the latest in hybrid, CNG and fuel cell technology.

The Production Gallery presented by Maserati features “Made in Italy: Design to Line,” an exhibit showcasing how a production luxury car goes from rendering to model to finished vehicle. Continue down the hall and visitors can visit the High Performance Road Cars exhibit presented by Ford Motor Company, celebrating the 50th anniversary of Ford’s historic win at LeMans with the museum’s GT40 MkIII alongside the all-new Ford GT supercar. From there fans can step into the winner’s circle in the Motorsports exhibit in the Charles Nearburg Family Gallery presented by Lucas Oil Products, featuring some of the fastest and most seminal race cars of all time, backed by a 134-foot, 180-degree projection wall immersing visitors in the sights and sounds of these incredible cars on the track. Directly behind the Motorsports exhibit is the Forza Motorsport Racing Experience, where fans can get behind the wheel of a variety of vehicles and try their hand at racing on driving rigs running the latest version of Microsoft’s racing simulator.

From the Driving Gallery, visitors step out of the four-wheeled world and into the Motorcycles Exhibit in the Richard Varner Family Gallery, presented by Bonnier Motorcycle Group. This exhibit features nearly two dozen of the fastest, rarest, most beautiful or sometimes oddest two-wheeled vehicles from history. Finally, the second floor features a gallery that bears the name of the brand that got Robert E. Petersen his start – the Hot Rod Gallery, presented by TEN – The Enthusiast Network. This exhibit celebrates Hot Rod Magazine, Petersen’s first publication, along with the cars featured in the magazine over the years, artifacts from Petersen’s life and a selection of wildly customized cars – from iconic customs (the Hirohata Merc and Billy Gibbons’ “CadZZilla”) to lowriders, roadsters and race cars.

One last trip down the grand staircase and visitors will find themselves on the Peter and Merle Mullin Artistry Floor (1), where they can discover the most artfully designed vehicles from history, often regarded as rolling sculpture. Explore how the automobile has been interpreted as the subject of fine art and even used as a canvas for artistic expression. The Mullin Grand Salon features the exhibit Artistry of the Automobile, featuring some of the finest coachbuilt cars of the art deco era, from the 1936 Type 57sc Bugatti Atlantic to the 1938 Talbot-Lago T150C SS Figoni et Falaschi Teardrop, and more. This gallery also houses a 166-foot panoramic display wall displaying motion graphic art inspired by the “golden ratio,” a design standard often used in Art Deco era design.

From the Mullin Grand Salon, visitors can move to the Ken and Dayle Roath Gallery, featuring a curated display of cover art from the 106-year history of Westways Magazine, the print publication of the Automobile Club of Southern California. Never before has such a collection been assembled and displayed in one place.

Finally, the last exhibit on the top-to-bottom tour is also the first one visitors see upon entering the museum – BMW Art Cars in the Armand Hammer Foundation Gallery, presented by BMW of North America. The BMW Art Car program was launched by French auctioneer/racer Hervé Poulain, who commissioned Alexander Calder to design the livery of a 1975 BMW 3.0 CSL. The car was campaigned at the 1975 24 Hours of Le Mans by Sam Posey, Jean Guichet and Hervé Poulain and was one of Calder’s last works. Also on display is the 1995 BMW 850 CSi designed by highly influential British artist David Hockney, who now lives a few miles from the Petersen, as well as the 2008 BMW Z4 used by South African artist Robin Rhode for the “Expression Of Joy” project. Rhode utilized the car as an internal-combustion paint brush: He remotely activated paint sprayers directed onto the tires as the Z4 drove over a large canvas. A piece of the Expression of Joy canvas is displayed on the wall in the Hammer Foundation Gallery, as are images and information on all 17 BMW Art Cars.

To see it all, the Petersen Automotive Museum opens to the public on Monday, December 7th. The museum is open seven days a week, from 10am to 6pm, and admission prices are as follows: adults – $15, seniors and students – $12, children – $7, active duty military and educators – free, Children under 3 – free. To learn more about The Petersen, its latest exhibits, rotating galleries and special events, please visit www.Petersen.org.