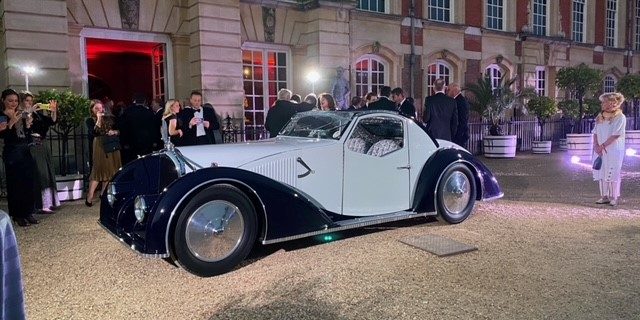 The award, which is voted on exclusively by vehicle owners rather than judges, is the most distinguished and coveted prize presented at the event.

The Concours of Elegance at Hampton Court Palace brings together the rarest automobiles in the United Kingdom to the historic abode in England owned by the Queen and previously owned by Henry VIII. This year, the concours celebrated Her Majesty Queen Elizabeth II’s 95th birthday with a display of 95 iconic British automobiles, from the 1926 Bentley 4 1/2 Litre to the 2021 Lotus Evija.

The “Best in Show” award, which is the highest honor that is given at the Concours of Elegance, is unique in that the concours entrants themselves vote to determine the winning car instead of a dedicated panel of judges. The award was presented by Prince Michael of Kent to Merle Mullin of the Mullin Automotive Museum.

“We are honored to receive such an esteemed award as Best of Show,” said Mullin Automotive Museum founder Peter Mullin. “The Concours of Elegance at Hampton Court Palace is a world-renowned automotive display and to have one of our cars recognized there is an immense privilege.”

This coachbuilt 1934 Avions Voisin Type C27 Aerosport Coupe is the second of just two such cars designed by Gabriel Voisin in collaboration with architect André Noel-Noel Telmont. It was initially displayed at the 1935 Geneva and Madrid Auto Shows and owned by Telmont. Following World War II, the car changed hands between a number of notable collectors including Jean Kisling, son of painter Moise Kisling, and Renault Sport founder Jacques Terramorsi before disappearing in the 1950s.

The Aerosport was rediscovered later on by Philipp Moch who, in 2004, commissioned a two-year restoration using just three photographs of the car in period. It was sold to Peter Mullin in 2010 and has remained in the Mullin Automotive Museum collection since.

For more information about this car and others in the Mullin Automotive Museum collection, please visit www.MullinAutomotiveMuseum.com.