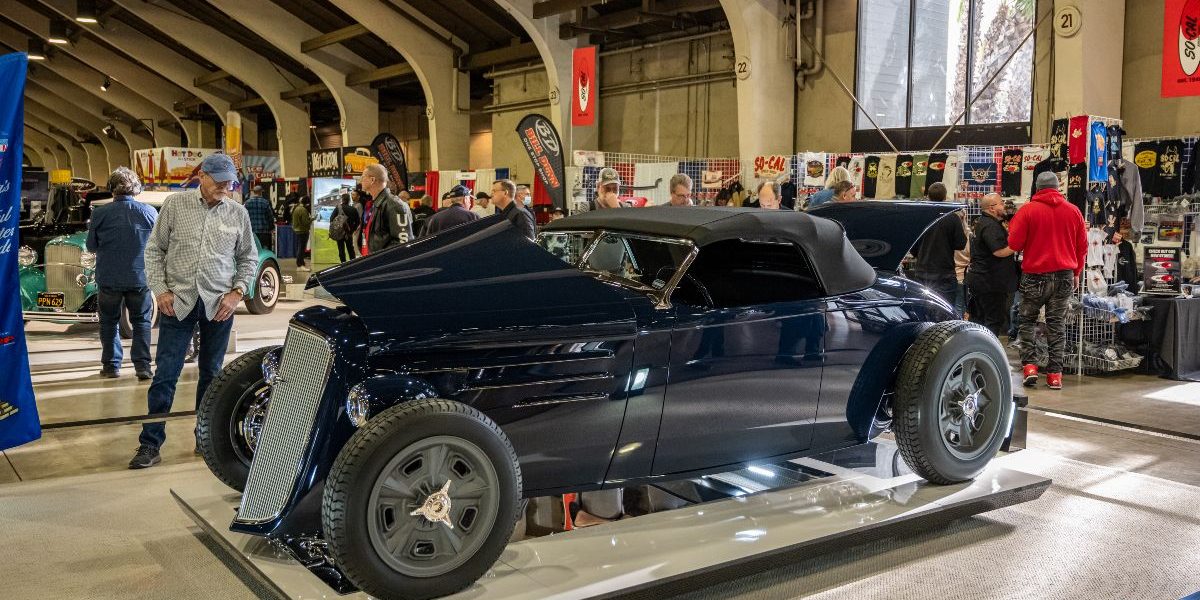 A 1934 Chevrolet Roadster owned by Jeff Breault and built by Devlin Rod & Customs was crowned America’s Most Beautiful Roadster, while a 1932 Ford Coupe owned by Pat Gauntt and built by Hollywood Hot Rods won the Al Slonaker Memorial Award

Pomona, Calif. (Jan. 30, 2022) – The Grand National Roadster Show recognized the top roadsters, hot rods and custom vehicles in the country during its awards ceremony, which took place on Jan. 30, 2022, in Pomona, California. The ceremony was the culmination of this year’s show and included the presentation of two of the custom car world’s most coveted awards – the America’s Most Beautiful Roadster (AMBR) award and the Al Slonaker Memorial Award.

One of the oldest and most prestigious awards in the automotive world, America’s Most Beautiful Roadster is presented each year to the best “open” hot rod in the country. This year’s AMBR winner, a 1934 Chevrolet Roadster owned by Jeff Breault and built by Devlin Rod & Customs, bested 10 other contenders taking home the title’s $12,500 prize provided by ARP Bolts. It also became immortalized on the award’s 9.5-foot-tall perpetual trophy alongside a “who’s who” of hot rodding, including legendary builders like George Barris, Andy Brizio, Boyd Coddington, Troy Ladd and Chip Foose.

The AMBR winning 1934 Chevrolet Roadster has been over two years in the making. The project was put together by the team at Devlin Rod & Customs on a custom Roadster Shop chassis and features an interior by Downey’s Auto Upholstery. A modern high-performance LS engine hides under the hood, but you wouldn’t know it as all of the identifying parts have been redone to match the vintage of the car. The result is a build with modern technology and a clean, classic style.

The Al Slonaker Memorial Award was elevated to the same importance as AMBR with a matching $12,500 prize thanks to award sponsor ARP Bolts. The winner of this year’s prize is a 1932 Ford Coupe owned by Pat Gauntt and built by Hollywood Hot Rods. The Al Slonaker Memorial Award is dedicated to the memory of Al and Mary Slonaker, who founded the Grand National Roadster Show in 1949. The award has been presented to the best non-roadster vehicle at the show each year since 1974.

The winning 1932 Ford Coupe features a race-built 331 Cadillac engine with 390 heads and custom high-compression pistons. The project was first imagined in 2007 and has evolved over the years into what we see today – the ultimate ’34 Ford Coupe. Troy Ladd and the Hollywood Hot Rods team also built a unique cockpit-controlled suspension system using pressurized oil adjusted by valves mounted near the gear shifter. More than 15 years in the making, this project exemplifies Al Slonaker’s vision for his Grand National Roadster Show in 1949.

“Each year, the best in the world congregate in Pomona to participate in the Grand National Roadster Show and compete for the America’s Most Beautiful Roadster and the Al Slonaker Memorial Award,” said John Buck, owner of Rod Shows and producer of the Grand National Roadster Show. “Jeff Breault’s 1934 Chevrolet Roadster and Pat Gauntt’s 1932 Ford Coupe fit the bill as some of the all-time greats in their respective classes. Both builds now stand among giants, and deservedly so.”

More than 600 individual awards were presented during the closing ceremonies of the Grand National Roadster Show, which has earned its reputation as “The Grand Daddy of Them All” by showcasing more than 1,000 world-class roadsters, hot rods, muscle cars and customs while attracting tens of thousands of fans throughout the weekend.

This year, the Grand National Roadster Show featured a special exhibit called “A Gathering of Hot VWs” presented by Hot VWs Magazine and EMPI. The exhibit hosted a curated gathering of the most important, unique and stylish Volkswagens throughout history. VWs on display included Billy Gibbon’s never-before-seen Volkswagen Beetle and some of the best Volkswagen custom creations, including Beetles, Buses, Ghias and buggies.

This year’s show also featured the Grand Daddy Drive-In that celebrated the 90th anniversary of the 1932 Ford with multiple examples of the iconic hot rod. Appearances by celebrities from across the automotive enthusiast community highlighted the weekend, with Billy Gibbons of ZZ Top and Erik Estrada of CHiPs both in attendance. Galpin Motors displayed the iconic 1951 Mercury Coupe known as the “Hirohata Merc” built by Sam and George Barris. This year’s “Builder of the Year” was Roger Lee, owner of Iron Works Speed and Kustom. Roger Lee earned the accolade thanks to decades of work pushing the boundaries on the design and execution of his custom creations.

The annual pinstripers auction raised money for the Slave 2 Nothing Foundation, established to help improve the lives of individuals and families affected by substance abuse and human trafficking. The auction took place on Saturday and Sunday.

For more information about the Grand National Roadster Show and the full list of 2022 award winners, please visit hotrodshows.com/grand-national/gnrs-past-winners/

About Rod Shows
Based in the automotive cultural hub of Southern California, Rod Shows produces the West Coast’s premier indoor hot rod and custom shows, including the Grand National Roadster Show and the Sacramento Autorama. Its professional show management team sets the highest standards for top-quality competition and displays with every show and personally visit the country’s top automotive coachbuilders and events throughout the year, ensuring the Best of the Best participate in its events. For more information, visit www.rodshows.com.