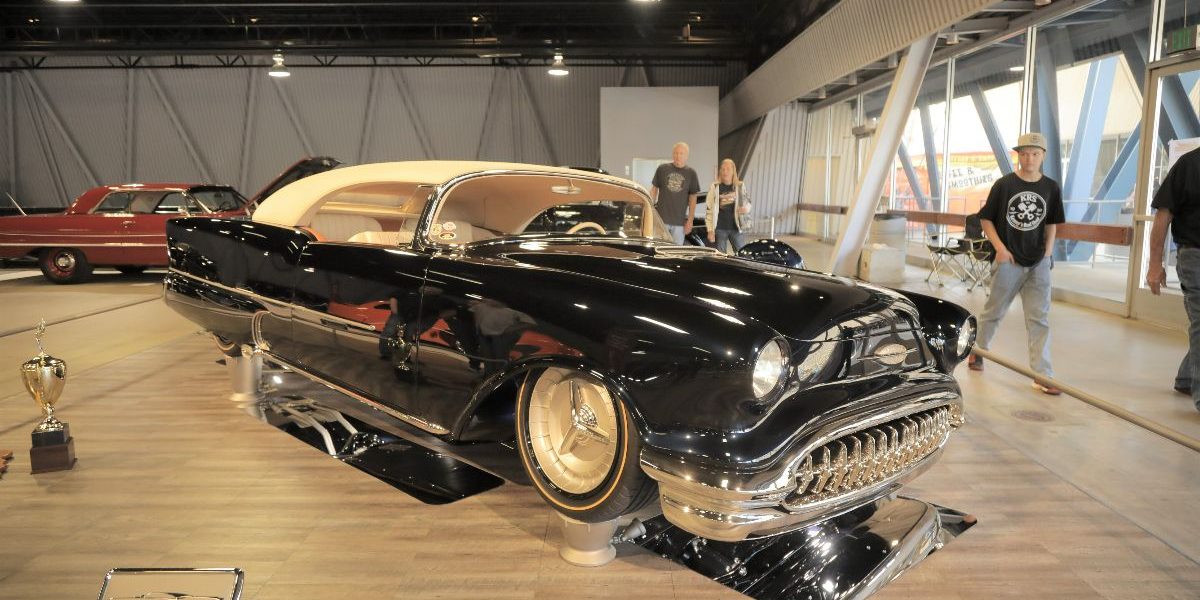 A 1956 Oldsmobile 98 owned by Jeffery Hess was awarded the top honor in the custom car world, while a 1947 Buick Sedanette Super owned by Dave Ceccanti was crowned the King of Kustoms.

SACRAMENTO, Calif. (May 1, 2022) – The Sacramento Autorama, one of the world’s longest-running indoor car shows, hosted over 500 world-class custom vehicles and handed out over 400 individual awards during its awards ceremony on Sunday, May 1, 2022, at the Cal Expo Fairgrounds in Sacramento, California. The most prestigious of these awards was the “Custom d’Elegance,” which was awarded to Jeffery Hess and his 1956 Oldsmobile 98. Other major award winners included Dave Ceccanti who won “King of Kustoms” with his 1947 Buick Sedanette Super and Jerry Logan who won the H.A. Bagdasarian “World’s Most Beautiful Custom” for his 1941 Packard Convertible.

The Sacramento Autorama’s most coveted award is the “Custom d’Elegance.” It is given to the best chopped, channeled or sectioned vehicle that embodies the true spirit of a classic custom. This year, the Oldsmobile triumphed over the other five contenders, earning its owner a spot alongside industry icons such as Joe Bailon, James Hetfield and the last winner, Jeffrey Boone. Hess also received $5,000 in prize money courtesy of ARP Fasteners.

The Oldsmobile was a labor of love, taking the owner eight years to complete with the support of a team of designers, fabricators, painters, mechanics and upholsterers. The design of the car was penned by several students from the Pasadena Art Institute alongside owner Jeffery Hess himself. From there, the crew at Pro Design Hot Rod brought the car to life with an interior by Bill’s Upholstery. The Sacramento Autorama is the grand finale for the car, which began touring in 2020.

The Sacramento Autorama’s other top award was the “King of Kustoms,” which recognized the best 1935-1964 custom build focusing on bodylines, design, flow and quality of workmanship. This year’s winner was Dave Ceccanti with his 1947 Buick. The car was built by Lucky 7 Customs with judges taking particular note of the beautiful paint and immaculate fit and finish.

“It was a thrill to return to Sacramento for the 71st installment of this long-running tradition,” said John Buck, owner of Rod Shows and producer of the Sacramento Autorama. “Some of the best customs, hot rods, lowriders and trucks we’ve ever seen turned out after a long two-year break. We couldn’t have asked for a better welcome back and look forward to many more years with the city of Sacramento.”

Other significant awards given at the show were the “Big B Awards.” The “World’s Most Beautiful Custom,” presented by the family of show founder H.A. Bagdasarian, recognized the best custom car from 1936 to the present that featured a silhouette change, including a chop, channel or section. This year, that award and its $500 prize went to Jerry Logan and his 1941 Packard Convertible designed by John d’Agostino and built by Oz Welch. Judges noted that this is exactly the car Bagdasarian would drive today.

The next “Big B Award” was the “Sam Barris Memorial Award,” named in honor of legendary custom car builder Sam Barris. The Barris family presented the award to the owner of the car with the best metalwork, alignment of body panels and paint. For 2022, the Barris family chose Jeffery Hess and his ’56 Oldsmobile. Hess and his Olds earned a $500 prize for the win.

The “Candy Apple Red Joe Bailon Award” was designed and created by Bailon, one of the nation’s premier custom car designers and builders. This year, the award was presented to Joe Ortega and his 1963 Chevrolet Impala. Ortega received the award and a $500 prize.

The last of the “Big B Awards,” the “Dick Bertolucci Automotive Excellence Award,” was given to a vehicle manufactured before 1973 that the family of the late hot rod and custom builder Dick Bertolucci felt exhibited the best craftsmanship in assembly, fit, finish and detail. This year, the Bertolucci family selected Pat Gauntt’s 1932 Ford Coupe built by Troy Ladd’s Hollywood Hot Rods for the trophy and $500 in prize money. This same car also won the Al Slonaker Memorial Award earlier this year at the Grand National Roadster Show.

For more information about the Sacramento Autorama and the complete list of 2022 award winners, please visit www.rodshows.com/sa/.

About Rod Shows
Rod Shows produces the West Coast’s premier indoor hot rod and custom car shows, including the Grand National Roadster Show and the Sacramento Autorama. Its professional show management team sets the highest standards for top-quality competition and displays with every show and personally visits the country’s top automotive coachbuilders and events throughout the year, ensuring the Best of the Best participate in its events. For more information, visit www.rodshows.com.