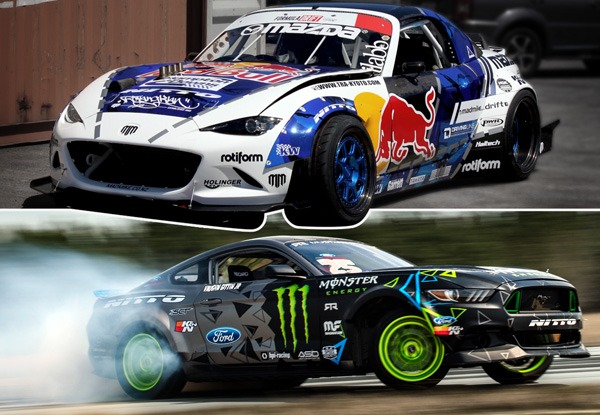 Nitto® Tire’s 2016 Formula DRIFT roster features a drift champion, an international sensation, and one of the sport’s biggest rising stars

Cypress, Calif. (March 30, 2016) – Nitto Tire U.S.A. Inc., a leading manufacturer of off-road and street performance tires, announced its 2016 Formula Drift lineup today. Returning for 2016 are Formula DRIFT champion Vaughn Gittin Jr. and international drift celebrity “Mad Mike” Whiddett who are both debuting new rides this year. Alongside these Team Nitto veterans is Alex Heilbrunn, one of the biggest up-and-coming drivers in the sport. Not only will Nitto will be providing these drivers with NT05 tires throughout the season, but they will also be giving them on-site technical support to make sure their cars are always performing at their best.

“We are really excited for what the 2016 Formula DRIFT season holds,” said Harry Kong, Nitto Tire U.S.A.’s Events and Motorsports Manager. “Team Nitto now has three of the most talented drivers on the circuit with three of the most recognizable and unique cars in the sport. Everyone at Nitto can’t wait to see how Vaughn and Mad Mike will do with their new cars and how Alex will do now that his car is equipped with the venerable Nitto NT05 tire.”

Vaughn Gittin Jr. will be making the U.S. competition debut of his 2016 Ford Mustang RTR at the Streets of Long Beach event this April. This new car packs the power of a nine-second drag car thanks to a 436 cubic-inch Ford Performance/Roush Yates-built V8 that cranks out over 900 horsepower at 9,000 rpms. Vaughn and his team had spent all of 2015 dialing in the performance and handling of the new S550 platform so that it would be ready to push his NT05 tires to the limit when the season kicks off this year.

“Mad Mike” wowed the world when his RADBUL Mazda MX-5 hit the shores last year packing four rotors, two turbos, and over 1,200 horsepower, which is a big part of why he earned the title of 2015 Formula DRIFT “Fan Favorite Driver.” This year, Mike is back sporting a new look on RADBUL that matches the sleek new styling of the 2016 Mazda MX-5 Miata. Now that he has had nearly an entire competition season to get the car sorted, he and his Mazda are going to be a force to be reckoned with on the track.

The newcomer to Team Nitto this year is Alex Heilbrunn, who won the 2015 Formula DRIFT Pro 2 championship in his first year of competing professionally. Alex’s racing career began at the age of 12 when he raced downhill mountain bikes in his home country of Peru. After winning multiple back-to-back championships, Alex turned his sights to motorsports and eventually drifting. Following his Pro 2 win, Alex has earned a spot in the top-level Pro Series and will be competing in his supercharged LS-powered BMW E46.

While all Team Nitto drivers compete on the ultra-sticky NT05 tire, they will also be utilizing Nitto’s all new NT555 G2 launched in January 2016 for their street and drift demos – like the ones at the upcoming Auto Enthusiast Day show in Arlington, Texas.

The 2015 Formula DRIFT season will begin with Round 1: Streets of Long Beach on April 8-9. For more information about Formula DRIFT, visit www.formulad.com, learn more about Nitto-sponsored drivers at www.nittoracing.com and complete details on Nitto tires can be found at www.nittotire.com. Join Nitto Tire on Facebook at www.facebook.com/NittoTire and on Twitter at @NittoTire.