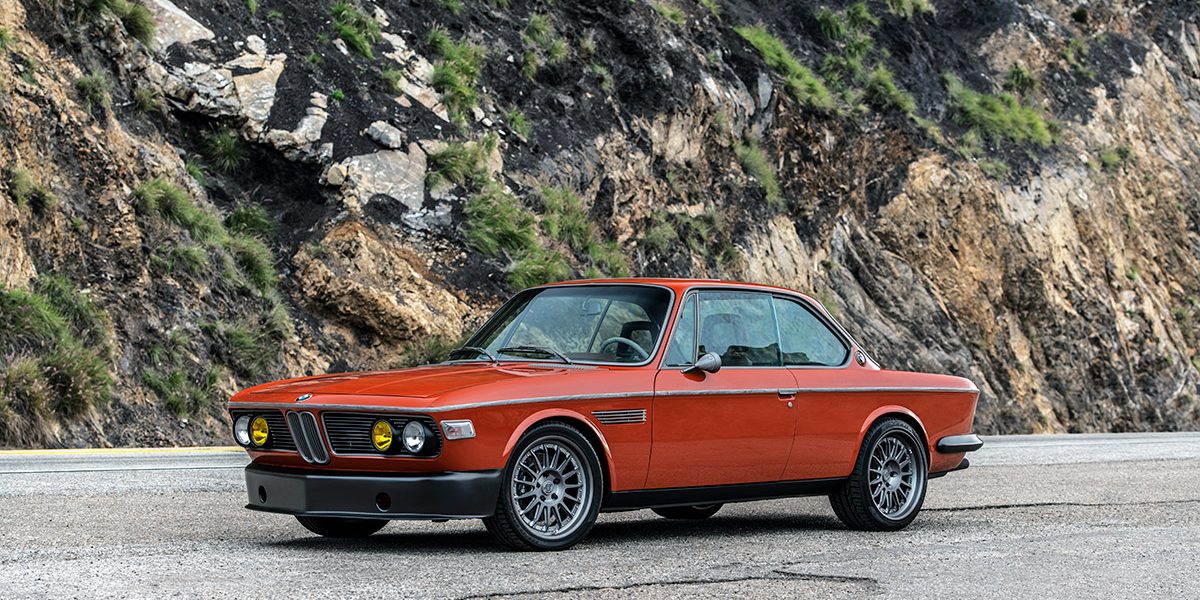 Known for carbon fiber classic and late model muscle cars, SpeedKore has expanded its scope to the European segment with the restoration and custom modification of an iconic BMW in partnership with actor, Robert Downey Jr.

Grafton, Wis. (August 2020) – SpeedKore, the American performance company known for its full carbon fiber vehicles and pre-preg carbon fiber body parts, has debuted its first European vehicle in the form of a 1974 BMW 3.0 CS built for Robert Downey Jr. Following a custom 1970 Ford Mustang Boss 302 and 1967 Chevrolet Camaro, the 1974 BMW 3.0 CS is the third vehicle SpeedKore has built for Downey.

The BMW build process began when Downey approached SpeedKore Vice President Dave Salvaggio with the unusual project. Downey’s unique vision for the classic BMW melded modern materials with classic European styling and SpeedKore was just the shop to accomplish the transformation. Unlike previous SpeedKore builds, the CS features a predominantly metal body that was restored at the Grafton-based facility. However, there are a number of signature SpeedKore carbon fiber accents throughout, including the front air dam, rocker moldings and rear bumper, which are all finished in a BASF Glasurit satin clearcoat.

Powering this classic BMW is a naturally aspirated S38 inline-six from an E34 M5 mated to a ZF 4HP22 4-Speed automatic transmission. The CS rides on Bilstein shocks and a custom set of HRE C109 forged three-piece wheels wrapped in Pirelli P-zero tires. Stopping power comes courtesy of Brembo, with six-piston brakes up front and four-piston brakes at the rear. The body of the CS was painted in a custom “Downey-inspired” brick red PPG paint, accented by Cerakoted titanium grey accents on all-original brightwork. A woodgrain beltline and custom-machined rear deck lid spoiler add a custom touch, while complementing the interior wood detailing.

The Italian-inspired interior was custom designed by SpeedKore and upholstered by Gabe’s Custom Interiors in coffee-colored leather with pebble weave seat centers and door cards. The dashboard is made to look like the original factory unit, however, it is completely remolded and fitted with gauges by Classic Instruments and a hideaway Focal touchscreen head unit. The center console is mostly stock, save the addition of a ‘70s Lamborghini inspired grab handle. Per Downey’s request, the rear seat was replaced with a custom packing shelf, complete with matched luggage. The grand touring theme is continued in the upholstered trunk, where a fitted leather-wrapped YETI cooler resides. This CS is perfect for either a spirited drive in the canyons or a day of leisure in the sun.

“Having built two vehicles for Robert previously, he has become a close friend of SpeedKore,” said Salvaggio. “When he came to us to restore the BMW, we instantly said yes and were excited by the opportunity to diversify our portfolio of vehicle builds with an iconic European vehicle. The great part about working with Downey is he actively participates in the styling of the vehicle and the final product reflects his unique style through and through.”

For more information on the 1974 BMW 3.0 CS and SpeedKore carbon fiber parts, please visit www.speedkore.com or stay connected with the team on Facebook and Instagram.

About SpeedKore
SpeedKore™ Performance Group is an American performance company where engineers and artisans combine traditional craftsmanship with cutting edge technology. The SpeedKore high performance vehicles are engineered and built as limited editions or one-off, custom builds. SpeedKore is known for its use of pre-impregnated carbon on classic and late model vehicles builds as well as a wide variety of aftermarket body panels, parts and accessories. SpeedKore’s 1970 Dodge Charger, “Evolution,” received one of five Goodguy GOLD awards at the 2018 SEMA Show. Its all-carbon fiber 2017 Ford Mustang GT Fastback and it’s 1970 Ford Mustang Boss 302 were awarded the prestigious “Best in Show” design award from Ford Motor Company at the world’s largest aftermarket automotive trade show, the SEMA Show.