SEE THE LEGENDS, HEAR THEIR STORIES: THE PETERSEN OPEN’S ITS VAULT 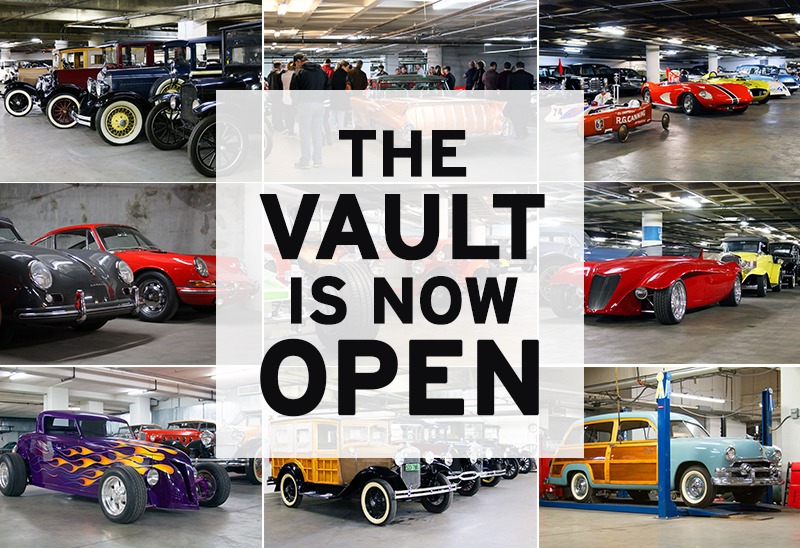 Hidden beneath the streets of L.A., The Petersen Automotive Museum’s Legendary Vault houses over 120 rare, valuable and legendary vehicles – many that have never been on display in the newly renovated museum. See them all on the all-new Vault Tour, with tickets now on sale.

Los Angeles, Calif. (January 5, 2016) – The all-new Petersen Automotive Museum – which opened one month ago after a 14-month, $90 million renovation – is proud to announce the re-opening of its legendary Vault. The Vault offers visitors the chance to go underground on a private tour, walk amongst 120 of the world’s most famous and infamous cars, hear the stories and gain unprecedented access to the museum’s most private areas.

“The Petersen is home to over 400 vehicles, some part of the permanent collection and many more on loan from private collectors, museums and manufacturers around the world,” said Executive Director Terry L. Karges. “Even after the renovation when we opened up the third floor as a display space, we only have room for 135 cars on display in the museum. That leaves over 300 vehicles we cannot display in the museum – all with incredible stories that need telling. Our new Vault experience will take visitors on private tours led by gifted storytellers, where they can walk the aisles and see 125 of the best cars from the collection in our secure underground facility. It’s quite an experience.”

Featured cars include a 1952 Hudson Wasp originally owned by actor Steve McQueen, a 24-karat gold-plated DeLorean, several head-of-state cars including the Chrysler Imperial that served President Eisenhower, Saddam Hussein’s Mercedes Pullman, a variety of movie and television “star cars,” the largest gathering of “America’s Most Beautiful Roadster” award winners in history, rarities like the 1964 Porsche 901 and 1952 Ferrari 212/225 Barchetta, and many more.

Vault tour tickets are $20 and must be purchased with a general admission ticket. Children under 13 are not permitted on vault tours. To learn more about the Petersen Automotive Museum, please visit www.petersen.org or call 323.930.2277.

About the Petersen
The Petersen Automotive Museum Foundation Foundation is a non-profit 501(c)(3) charity. The Museum is located at 6060 Wilshire Boulevard (at Fairfax) in Los Angeles, California, 90036. Admission prices are $15 for general admission adults, $12 for seniors and students with ID, $7 for children ages 3 to 12. Active military with ID, personal care attendants and children under three are admitted free. Museum hours are 10am to 6pm. For general information, call 323/930-CARS or visit www.petersen.org.