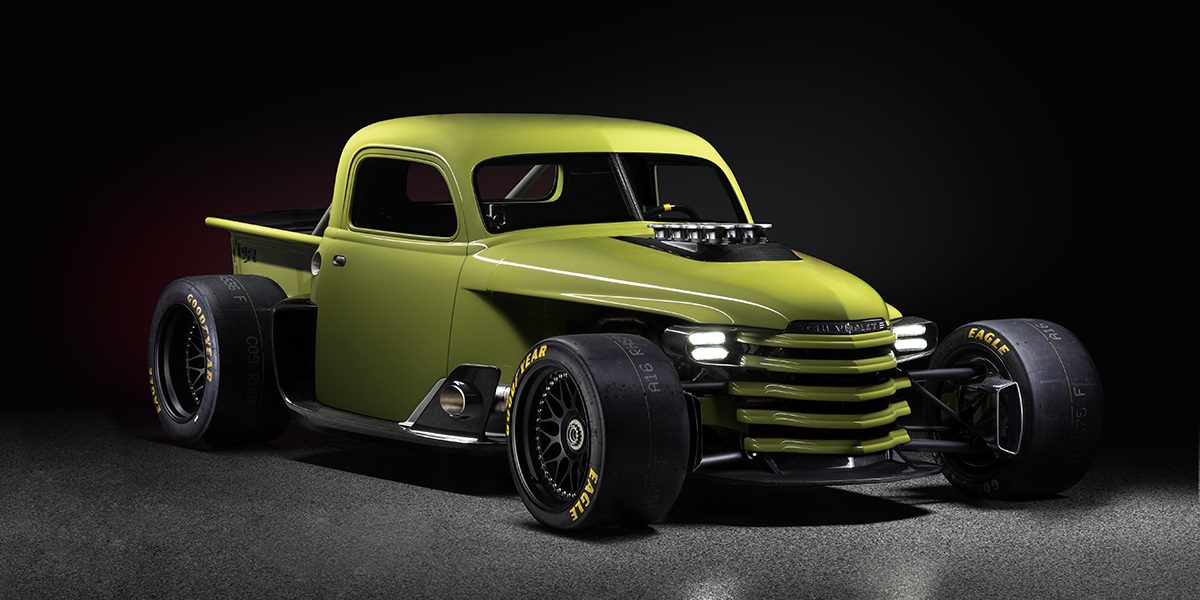 The most extreme Ringbrothers build yet merges vintage farm truck with modern racecar and boasts a high-performance 1,000-horsepower tall-deck marine racing engine and hundreds of custom touches attained through over 10,000 build hours of craftsmanship and finish work

SPRING GREEN, Wis., Nov. 1, 2022 – Ringbrothers, the world-renowned custom car builder and parts manufacturer, has unveiled its most extreme creation yet, the “ENYO” super truck. The new build is paradoxical to traditional American truck capabilities. The 1948 Chevrolet pickup is the result of over 10,000 thorough and laborious build hours. Powered by a Goodwin 1,000-horsepower tall-deck racing engine and crafted using extensive carbon-fiber components, ENYO embodies the quality and custom work Ringbrothers is known for.

“Ringbrothers is in new territory with four vehicle debuts at this year’s SEMA Show,” said Ringbrothers co-owner Mike Ring. “But we are especially excited to share ENYO with the world as our most outrageous build yet. This long-term project really showcases our ability to explore new means of design, engineering and performance within an entirely new realm of challenges and production with our partners. The outcome speaks for itself.”

After several years of planning and finding the right customer to commission the build, Ringbrothers turned the pipe dream of building an “anti-street-rod” into a reality. The chopped, channeled and sectioned 1948 Chevrolet pickup redefines the American classic with performance and design aspects that were inconceivable in its original era. ENYO features state-of-the-art chassis and suspension design, carbon fiber parts and aero management with wings and splitters that pushed Ringbrothers and the build partners into new territory. Unlike anything ever applied to a hot rod before, ENYO has incredible details baked in, from the CAD-designed trim and parts that were all cut in-house at the Ringbrothers machining facility to the way they seamlessly managed to mate a big-box truck cab and massive drivetrain successfully on a low-slung, open-wheeled, car-style chassis.

“We have been quietly planning this build for years, imagining and reimagining how it would ultimately take shape,” said Ringbrothers co-owner Jim Ring. “The end result is truly a super truck that brings together two vehicles that should never have met to deliver immense character combined with power and performance usually reserved for today’s most advanced racecars. We’re thrilled to finally be able to share ENYO with the world.”

Atop the one-off chassis designed by Scott Ahlman, Ahlman Engineering, in conjunction with Roadster Shop is the original 1948 steel cab extensively modified by Ringbrothers. Through careful craftsmanship, it is narrowed and chopped by four inches, lengthened and wedge cut. The remaining body pieces are constructed in 3K-weave carbon fiber, including a single-piece carbon-fiber belly pan spanning from front to back. ENYO’s modernization doesn’t stop at its engine. Ringbrothers implemented power windows, a custom stainless-steel gas tank by Rick’s Tanks, a Vintage Air Gen II compact air-conditioning system and a custom interior collaboration with Upholstery Unlimited and Gemini Technology Systems.

The open truck bed stages all the components needed to run this beast, and the clamshell hood is easily opened with electromagnetic latches. The side pipes are made from 58 feet of titanium pie-cut welds and are connected to the shining one-off custom headers. Every part of ENYO is created to show its impeccable design and performance capabilities.

As leaders in their industry, Mike and Jim Ring were some of the first custom builders to utilize high-tech innovative design and technology in each creation. Among being one of the first shops to chop classic muscle cars to change the lines, make wide-body builds, use unusual industrial materials for interior designs, integrate CAD for the design process and 3D printing for parts, the brothers were also the first in making custom billet parts in-house. Much of what they’re known for is now standard use at multibillion-dollar OEMs building concept cars. But, for a tiny shop in Spring Green, Wisconsin to be the kick starter for these trends is something incredible. ENYO exemplifies what Ringbrothers is capable of.

Ringbrothers LLC – (www.ringbrothers.com) – Based in Spring Green, Wisconsin, Ringbrothers has established itself in the automotive aftermarket as a premium parts builder and world-class car designer. Among its many accolades are several Chevrolet Best in Show awards, Goodguys Street Machine of the Year awards, Mothers’ Shine awards and a SEMA Battle of the Builders win in 2019. Ringbrothers has also been featured in some of the world’s largest automotive and mainstream news outlets. Ringbrothers proudly designs, fabricates, packages and ships its products from its headquarters in the United States, focusing on quality materials, craftsmanship and customer service. Revolutionizing the way resto-mods are done, Ringbrothers continues to innovate its products and builds every year with the goal of unveiling at least one new car at each SEMA Show. Learn more about Ringbrothers products and builds at Ringbrothers.com.