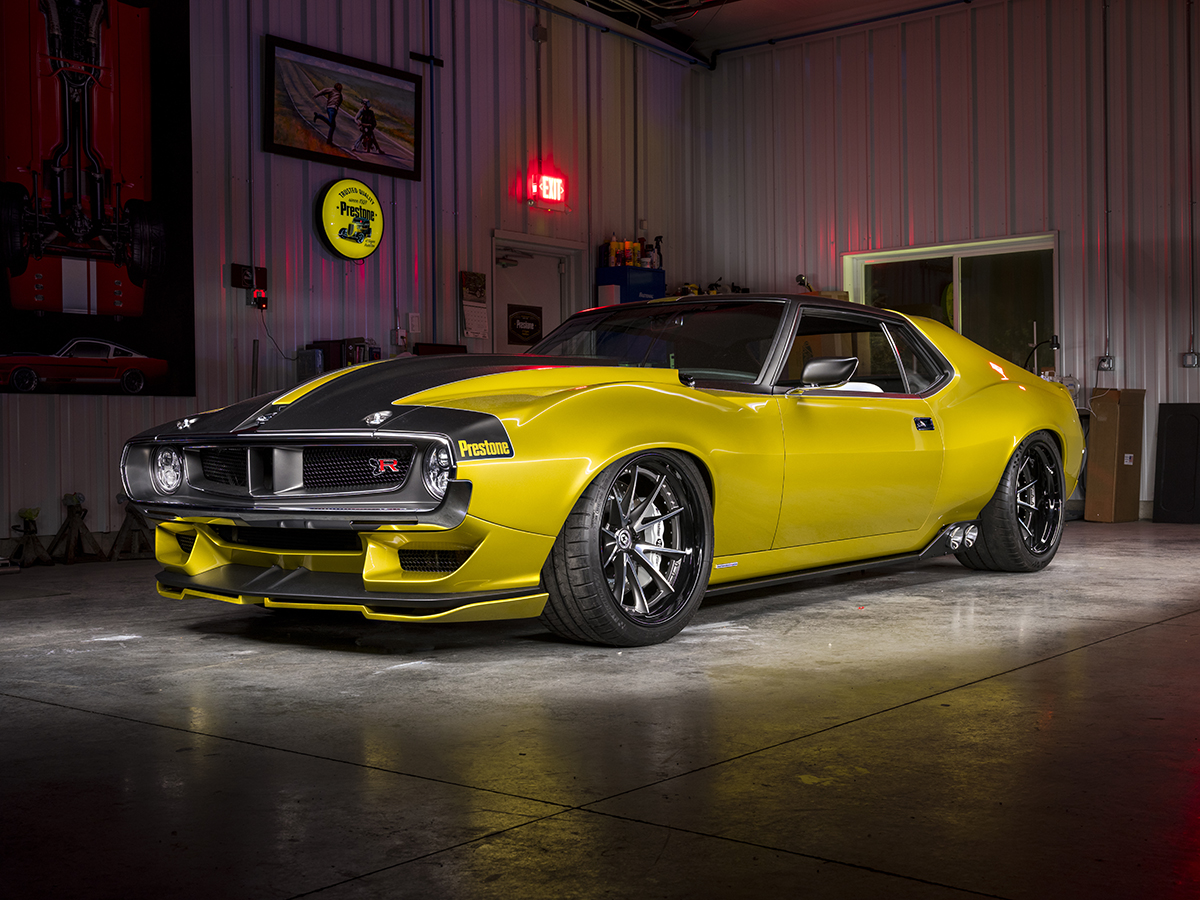 Co-Founders Jim and Mike Ring revealed the most extreme American Motors muscle car ever built with over 1,000 horsepower and carbon fiber body components, just one year after conceiving the project.

Spring Green, Wis. (October 31, 2017) – Renowned custom car builder Ringbrothers showcased its latest creation, the Prestone 1972 AMC Javelin AMX dubbed “Defiant!,” in front of a packed crowd at the 2017 SEMA Show in Las Vegas a mere 12 months after announcing the start of the project.  Unveiled in the Prestone booth by Co-Founders Jim and Mike Ring, “Defiant!’ is arguably the wildest custom vehicle design ever crafted by the Wisconsin based car builders thanks to its extreme appearance, cutting-edge construction techniques and four-digit power output.

When Prestone approached Ringbrothers about the idea of building them a vehicle, the Rings already had a canvas in mind – a 1972 Javelin that had been rolling around their home town for over four decades. With an extremely compressed 12 month timeline, the duo decided to rely heavily on Solidworks digital design tools to render the car’s new panels, which were then brought to life in their machine shop and carbon fiber facility.

The Rings extended the Javelin’s wheelbase by moving the wheels forward six and a half inches. The car’s distinctive wheel arches were moved forward and recreated in carbon fiber to pair with a new hood, front fenders, grille and front valance. Other custom details include tail lights, bumpers, trim and engine bay accessories all machined out of blocks of aluminum at the Ringbrothers facility.

The newly extended wheelbase is supported by a Detroit Speed Hydroformed front subframe originally engineered for a Camaro. The Rings installed Detroit Speed rack and pinion steering, as well as front sway bars and RideTech shocks for a smooth ride. The front suspension is complemented by a Chevy 12-bolt rear end fitted with a custom four-link suspension built by the Rings.

Key interior features include a Kicker sound system, Classic Instruments gauges, a Vintage Air Gen IV Magnum Evap Kit and custom seats by Upholstery Unlimited. “Defiant!” rolls on a set of HRE Performance Wheels sized at 20×11 in the front and 20×13 in the rear, all wrapped in Michelin tires sized 285/30/20 up front and 335/30/20 out back. With more than 1,000hp on tap, the Javelin requires massive stopping power, so a set of six-piston caliber Baer brakes are installed to bring the car to a stop.

To finish the look of the car and highlight the body work, the exterior of “Defiant! is coated in a rich, BASF Glasurit color named “Jalop Gold.”

For more information on the Prestone “Defiant!” 1972 Javelin, Ringbrothers and Ringbrothers billet parts, visit www.Ringbrothers.com  or stay connected with the team on Facebook, Twitter and Instagram.

ABOUT RINGBROTHERS
Ringbrothers LLC – (www.ringbrothers.com) – Based in Spring Green, WI, Ringbrothers has rocketed into the top ranks of American car builders over the past decade, winning numerous design awards including the Chevrolet “Best in Show” award at the 2014 and 2016 SEMA Shows, back-to-back Goodguys Street Machine of the Year awards, multiple Mothers’ Shine awards, countless magazine covers and several builds commissioned by OEMs. Founders Mike and Jim Ring also design and manufacture some of the most detailed billet interior and exterior parts that money can buy, beautifully designed with architectural lines and incredible craftsmanship, all made in the USA. Each piece of automotive jewelry that leaves the facility gives buyers an opportunity to make their very own Ringbrothers inspired cars that truly stand apart. 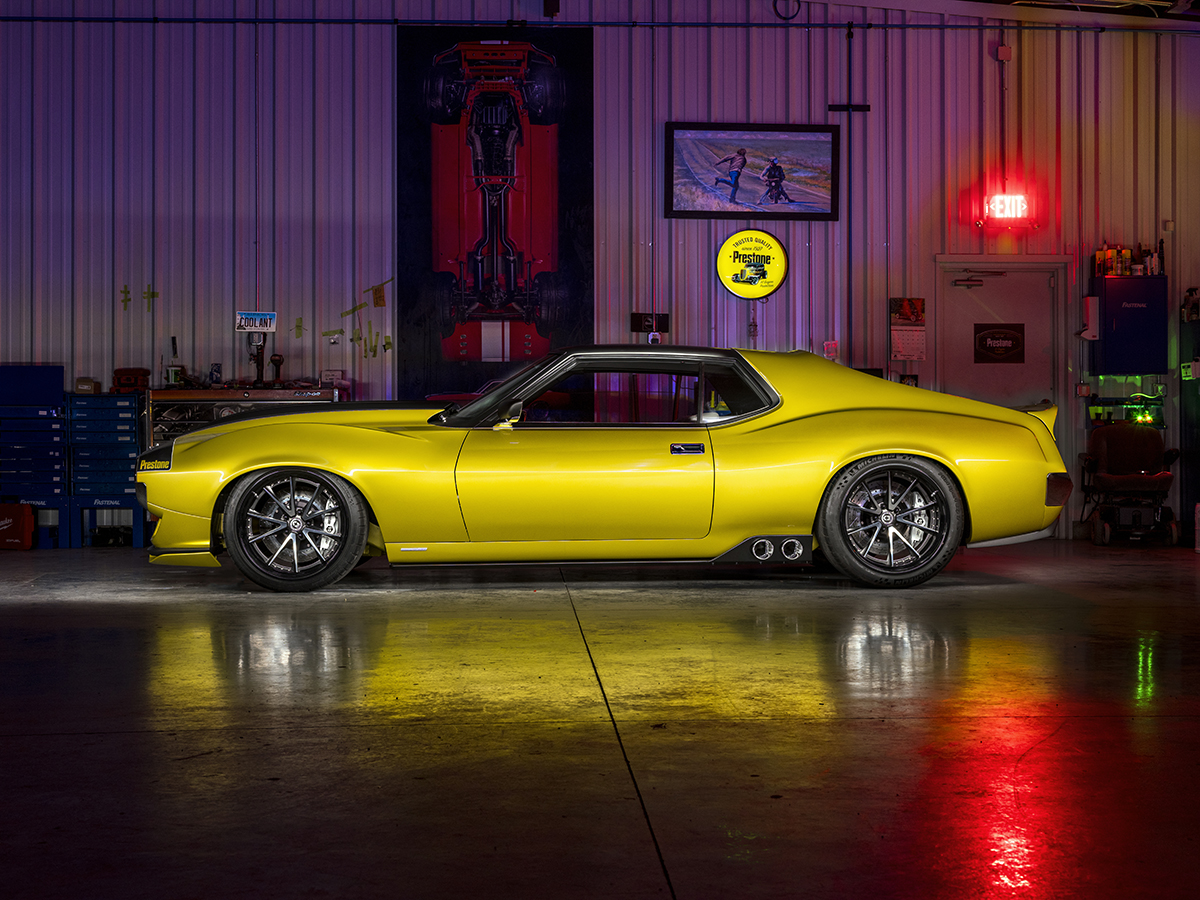