In addition to hosting a fundraiser dinner on August 23, the museum will showcase cars at Gordon McCall’s Motorworks Revival, The Quail, Werks Reunion, Japanese Automotive Invitational and Pebble Beach Concours d’Elegance—where the museum will announce plans for its 25th anniversary during its annual breakfast press conference

In addition to the above events, the Petersen will partner with RM Sotheby’s to host a fundraiser dinner and seminar as a kick-off to its annual breakfast press conference during Pebble Beach Concours d’Elegance.

“As the world’s greatest automotive museum, we strive to be an active part in the car community—especially at an event as important to enthusiasts as Monterey Car Week,” said Petersen Automotive Museum Executive Director Terry L. Karges.  “We want guests of the premier shows to see amazing classics straight from the Petersen and get a glimpse of the breadth of our collection back home in Los Angeles.”

The events to be featured are as follows:

For the red-carpet crowd, the Petersen will present a star of the silver screen in its own right—the 1967 Toyota 2000GT Roadster from the 1967 James Bond film You Only Live Twice. Secretly fabricated entirely by hand in the Yamaha factory in Shizuoka, Japan, the 2000GT was introduced in 1965 at the Tokyo Motor Show. Fabricated in just two weeks, the car was used in the movie by actress Akiko Wakabayashi, who portrayed Bond’s love interest in the film.

The second car on display will be the first-place winner of the 1969 Japanese Grand Prix, a 1969 Nissan R382. Studying the creations of the North American Can-Am series, Nissan incorporated key elements into its racecars. Constructed from the ground up, the R382 is powered by the marque’s first V-12 engine.

The Future of Collecting Dinner and Seminar – August 23, 2018
Following the Wednesday event, the Petersen, RM Sotheby’s will host a dinner fundraiser at the Portola Hotel & Spa in downtown Monterey. The intimate dinner will benefit the Petersen Automotive Museum Foundation.

The evening will feature gourmet food, a special preview of a pedigreed Porsche that will be at auction, and a panel discussion about “The Future of Collecting” with Petersen Chairman, Peter Mullin, RM Sotheby’s Chairman and CEO, Rob Myers and Chairman and CEO of Penske Motor Group, Greg Penske.

The Quail, A Motorsports Gathering – August 24, 2018
One of the most prestigious events of Monterey Car Week, The Quail, A Motorsports Gathering welcomes a unique selection of vehicles in the ultimate garden-party setting on the rolling greens of Quail Lodge & Golf Club. In addition to the 1967 Toyota 2000GT Roadster and the 1969 Nissan R382 above, the Petersen will present a 1978 Dome Zero at The Quail.

Often considered Japan’s forgotten supercar, the Zero first debuted at the 1978 Geneva Auto Show, quickly garnering the attention of toy manufacturers who were obsessed with the car’s low and sleek wedge appearance. Even after production of the car stopped, the Zero most notably lived on in popular culture as a featured prize in the racing video game Gran Turismo.

Werks Reunion Monterey – August 24, 2018
The popular Porsche show, Werks Reunion Monterey, will return to the Corral de Tierra Country Club celebrating both the Porsche marque as well as the camaraderie of being a Porsche enthusiast. Keeping with this theme, the Petersen will bring a 1951 Porsche 356SL Gmund Coupe.

This Gmund Coupe took first place in the 1100cc class at Le Mans in 1951. Emory restored the car to its 1951 specifications with a hand-built roof and other nuanced details that were carefully examined through black-and-white photos from the period.

Japanese Automotive Invitational – August 25, 2018
Held adjacent to the Infiniti Pavilion on Concours Plaza at Pebble Beach, the Japanese Automotive Invitational is truly unique among Monterey Car Week’s vintage automotive events. In line with the event’s mission to give a glimpse into the future of Japanese-inspired innovation and design, the Petersen will showcase both the 1967 Toyota 2000GT Roadster and the 1978 Dome Zero.

Pebble Beach Concours d’Elegance – August 26, 2018
Regarded as the premier event of Monterey Car Week since 1950, the Pebble Beach Concours d’Elegance presents an elegant selection of pre- and post-war collector vehicles on the Pebble Beach Golf Links.  The Petersen will begin the show with a special announcement regarding its upcoming 25th anniversary. This breakfast press conference at 9 a.m. will gather more than 200 people in the Petersen hospitality tent on the lawn.

At the show, the Petersen will display American automobile entrepreneur Preston Tucker’s personal car, the 1948 Tucker. One of only 51 models ever made, the Tucker features seat belts, a central headlight and a rear-mounted flat-six engine, which was technically advanced in its day. Preston Tucker’s inability to supply dealers with vehicles as scheduled contributed to an indictment on 31 counts of fraud, ceasing production on the car forever. 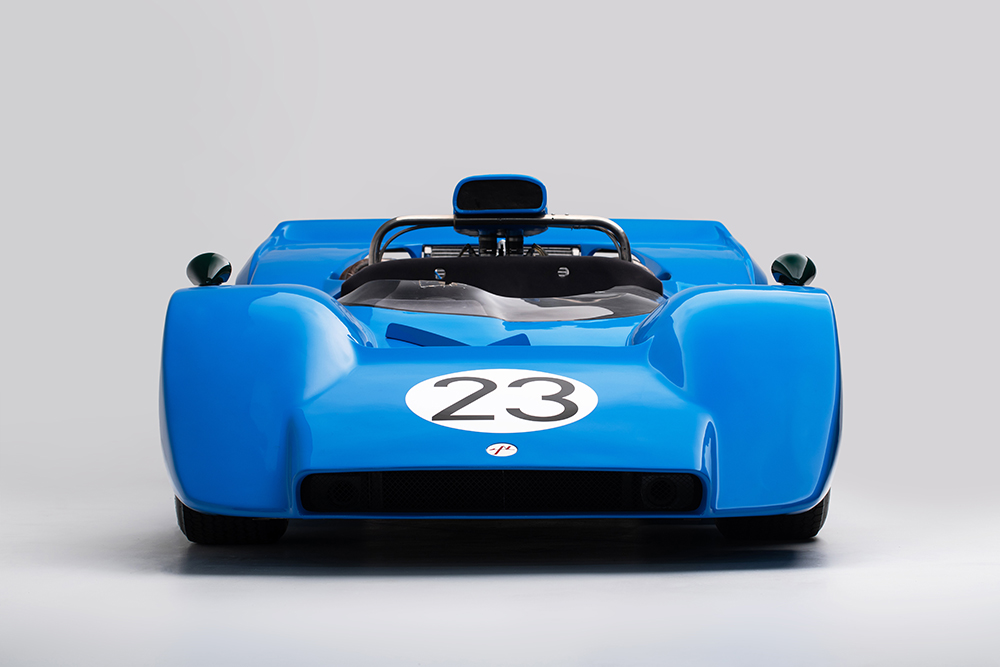