Nitto® Rolls Over The Competition At the MetalCloak Stampede 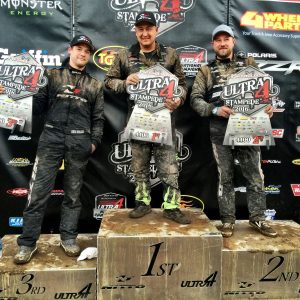 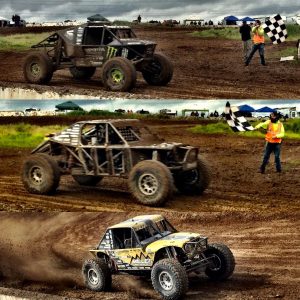 Cypress, Calif. (April 13, 2016) – Nitto Tire U.S.A. Inc., a leading manufacturer of off-road and street performance tires, has swept the podium at the MetalCloak Stampede Ultra4 off-road race for the second year in a row thanks to the talents of the Team Nitto drivers and the incredible traction afforded by their Trail Grappler M/T tires. This occasion also marks the second consecutive Ultra4 Nationals race in which Team Nitto has swept the podium; the last being the Reno Nationals at the end of the 2015 season. This incredible victory was achieved despite extremely uncooperative weather causing traction issues and mechanical failures for many other teams.

The MetalCloak NorCal Stampede was once again held at the base of the Sierra Nevada mountains in the Prairie City SVRA. The course consisted of a two-mile track filled with several rock obstacles, many tight turns and some high speed sections. The rain at this year’s event made the already difficult race even more of a challenge for drivers as they had to deal with as much as 200 pounds of mud building up on their vehicles, throwing the balance off and slowing them down. The mud also caused problems with the electronics on many vehicles including drive-by-wire throttle pedals, sensors and coil packs as well as with transmission, steering, and oil coolers. But the biggest issue that many drivers faced, however, was a lack of traction in the slippery mud. Thanks to the well-spaced tread blocks of the Nitto Trail Grapplers, Team Nitto was able to dig into the mud and found plenty of traction where others found none.

The Ultra4 4400 Unlimited class was swept by Team Nitto drivers Shannon Campbell, Jason Scherer and Erik Miller. Campbell is one of off-road racing’s most winning drivers, a two-time King of the Hammers winner (2008 and 2011), and was recently inducted into the Off-Road Motorsports Hall of Fame. Jason Scherer is a former King of the Hammers champion (2009) and has since scored numerous Ultra4 wins, consistently finishing near the top of the field. Erik Miller is also a two-time King of the Hammers champion, having won the signature event of the Ultra4 series in 2012 and 2016, and was also second in points during the 2014 Ultra4 National Championships.

“The NorCal Stampede is always an incredibly challenging event for any driver and with the inclement weather this year, it required some incredible talent from our drivers and an equally incredible tire to bring home the win,” said Chris Corbett, Nitto Tire U.S.A.’s Events and Motorsports Manager. “The mud on the course really illustrated the capabilities of our Trail Grappler tire and the 1-2-3 finish for Team Nitto showed why the Trail Grappler continues to be the choice of champions.”

The next race of the 2016 Ultra4 season will take place on May 6, 2016 at Hot Springs ORV Park in Hot Springs, Arkansas. For more information about Ultra4 Racing, visit www.ultra4racing.com, learn more about Nitto-sponsored drivers at www.nittoracing.com and complete details on Nitto tires can be found at www.nittotire.com. Join Nitto Tire on Facebook at www.facebook.com/NittoTire and on Twitter at @NittoTire.