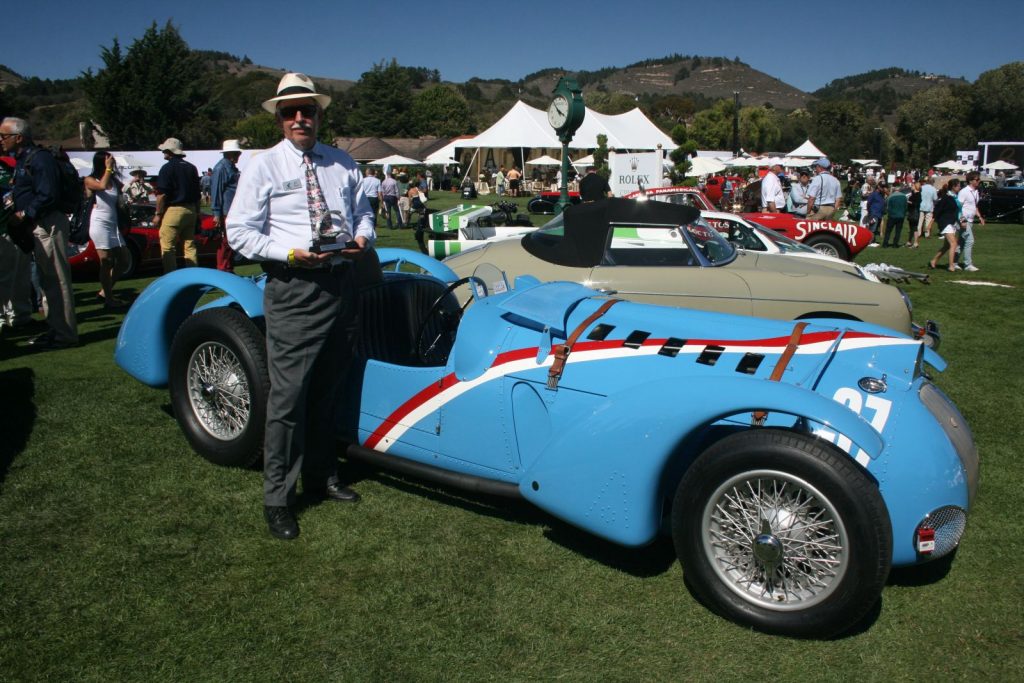 The “Million Franc Delahaye” and the Panhard et Levassor B1 honored with awards at The Quail and the Pebble Beach Concours d’Elegance.

Oxnard, Calif. (August 2015) – For any organization, to have a single vehicle from its collection receive an award at any of the events held during Monterey’s famed Car Week is a great honor. Having two vehicles receive awards is almost unheard of, but such was the case with the 1902 Panhard et Levassor B1 Rear-Entrance Tonneau and the famous “Million Franc” Delahaye 145, with the former taking home the prestigious Charles A. Chayne Trophy at the Pebble Beach Concours d’Elegance and the latter receiving the Best In Class award for Pre and Post-War Sports and Racing Cars at The Quail.

The “Million Franc” 1937 Delahaye Type 145 V12 Grand Prix (Chassis #48771) earned its nickname by answering a challenge set by the Automobile Club of France to beat an existing speed record around Autodrome de Montlhery. Famous French racecar driver René Dreyfus drove the Type 145, with its new naturally aspirated 4.5 liter V12, around the track sixteen times, at an average speed of 91 miles per hour. The car was then hidden in a hillside during World War II to protect it from the invading Germans. After the war, the engine was sold as a mechanical demonstrator to a school and the car disappeared from public view until Mr. Mullin purchased it in 1987. He undertook a full restoration and managed to locate the original magnesium V12 and reunited it with the car for the first time since the war. Now, far from being just a static museum piece, the “Million Franc” Delahaye is semi-regularly driven on track, with aplomb.

The Charles A. Chayne Trophy-winning Panhard represents a distinctly different approach to the automobile than the Delahaye. The 1902 Panhard et Levassor B1 Rear-Entrance Tonneau was never destined to win any races but it did manage to completely change the way automobiles were designed. The B1 represents one of the first uses of the “Systeme Panhard”. This “Systeme” was typified by use of a front-mounted engine, rear wheel drive, and use of a clutch pedal which interacted with an innovative sliding gear three speed transmission. This transmission became the industry standard until Cadillac introduced the synchromesh in the late 1920s. The front engine, rear wheel drive architecture remains prevalent to this day. Another Panhard innovation that remains in use today is the so-called “Panhard Rod” which is used to prevent side-to-side movement in a live axle-equipped vehicle.

“We feel that it’s important for us to continue to race and display these wonderful old cars so that people can see how technologically important they were and how capable cars like the ‘Million Franc Delahaye’ are today,” said Mullin Museum founder, Peter Mullin. “It’s truly an honor to have the cars recognized during Car Week, especially at events such as Pebble Beach and The Quail. We love the cars so much, it’s great to have others appreciate them as well.”

Monterey Car Week is like no other automotive gathering in the world, and the Mullin Museum is absolutely thrilled to bring pieces from the collection out just to participate and educate. To have won two awards truly speaks to the interest that the public has for cars from this era and reinforces the truth of the Mullin Museum’s mission to showcase the beauty and splendor of French automotive styling and the innovative technical achievements of French automotive designers throughout history.

For more information on the Mullin Automobile Museum, please visit www.MullinAutomotiveMuseum.com or call 805.385.5400.

About The Mullin Automotive Museum
The Mullin Automotive Museum is located at 1421 Emerson Ave., Oxnard, CA 93033, in the building formerly occupied by the Otis Chandler Vintage Museum of Transportation and Wildlife. The museum is open to the public every other Saturday from 10:00 a.m. to 3:00 p.m. Tickets must be purchased in advance at www.MullinAutomotiveMuseum.com. For information on semi-private tours or on Mullin 1000 Club membership benefits, please call 805.385.5400.