Oxnard, Calif. (August 3rd, 2017) — The Mullin Automotive Museum today announced it will display six French classics at various events during Monterey Car Week. Selected from the museum’s collection, the vehicles will be showcased at the Rolex Monte-rey Motorsports Reunion; The Quail, a Motorsports Gathering; and The Pebble Beach Concours d’Elegance.

The Mullin’s mission is to show and exhibit its cars, sharing their stories and educating the public about the his-tory of these rolling sculptures. Monterey Car Week provides the ultimate stage for these French classics.

“The motorcars we will bring to Monterey were specifically selected based on their competition history, as well as elegant styling and compelling stories,” said Mullin Automotive Museum Founder, Peter Mullin. “Aligning with our objective, these meticulously maintained classics should be enjoyed on roads and race tracks.”

The events and the automobiles in attendance are as follows:

Rolex Monterey Motorsports Reunion – August 16th – 20th Laguna Seca Raceway will again host the world’s most historically significant competition cars, driven the way they were truly intended. In attendance will be four cars from The Mullin, available for viewing up close in the pits or roaring down the main straight.

Setting the pace will be a 1931 Bugatti Type 51 Grand Prix competing with Derek Hill behind the wheel. Return-ing to Laguna Seca as reigning pre-1940 Sports Racing & 1927-1951 Racing Cars class champion, Hill looks to repeat that victory with the Type 51, the 12th of 40 such examples built. Chassis no. 51132 has been raced suc-cessfully throughout Europe, Africa and now looks to dominate at Laguna Seca.

A 1936 Bugatti Type 57SC Competition Roadster, to be driven by Peter Mullin himself, will take to the Laguna Seca course as well. The pre-war roadster was engineered to perfection over decades of racing, with a body pen-ciled by the era’s preeminent designers. The result is an automobile that is as stunning at speed as it is standing still. This type 57SC has already won best-in-class at The Quail and now seeks to take the checkered flag at Laguna Seca.

The 1950 Talbot-Lago T26C Grand Prix will be driven by Dutch racer and 24 Hours of Le Mans veteran Hans Hugenholtz Jr. The Talbot-Lago campaigned throughout Europe in period and has been a familiar sight at historic races under the ownership of Peter Mullin over the last 20 years. Chassis no. 110052 has raced throughout Eu-rope, South America as well as North America.

Pebble Beach Concours d’Elegance – August 20th The world’s premier concours event hosted along the stunning California coast, the Pebble Beach Concours d’Elegance will feature two automobiles from The Mullin. Produced in Le Mans France, a 1905 Leon Bolle will grace the Pebble Beach golf course. The Leon was a popular entrant in early French automotive races, attaining then blistering speeds of 30 mph. In addition, a 1951 Bugatti 101C will be entered. The extremely rare post-war Bugatti is the only 101C fitted with a supercharger, and the second of just seven produced. During the post-war era, the 101C was a last-ditch effort to revive the brand. Though unsuccessful, the importance of this automobile cannot be understated today. 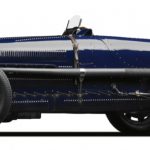 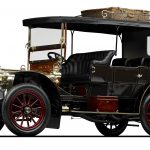 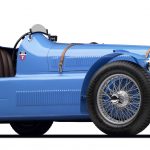 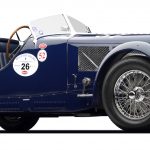 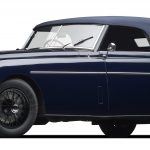 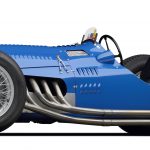