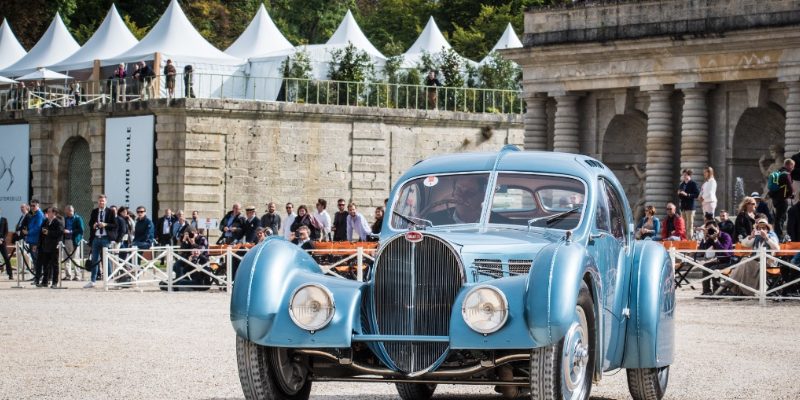 Recently named “Best of Show Concours d’Etat” at the Chantilly Arts & Elegance, the pre-war Bugatti will compete against seven other show-winning classics for the highest honor.

Paris, France (December 21st, 2017) – A pinnacle of the Mullin Automotive Museum’s collection, the 1936 Bugatti Type 57SC Atlantic has been nominated for The Peninsula Classics Best of the Best Award following its “Best of Show Concours d’Etat” win at the Chantilly Arts & Elegance. The iconic car has been on loan to L.A.’s Petersen Automotive Museum since October 2016 for the “Art of Bugatti” exhibit. Petersen guests have less than a month to observe the prized vehicle before it leaves the Mullin Grand Family Salon on January 13th.

The Peninsula Classics Best of the Best Award has recognized the world’s finest automobile since its inaugural year in 2015. Eight “Best In Show” winners from prestigious Concours events around the world compete and are judged by a panel of 24 experts, including Henry Ford III and The Duke of Richmond, to determine which car ultimately deserves the impressive title. Winner of the 2018 award will be announced at a private dinner at The Peninsula Paris on February 8th during Retromobile.

Considered the “Mona Lisa” of the automotive world, the Mullin Museum’s Atlantic represents the first of only three models ever produced. Marked by riveted flanges on a blue, all-aluminum body, this particular Bugatti is the only surviving “Aéro Coupé,” a designation given to the first two cars that were mechanically very similar to the aérolithe. Delivered new in 1936 to Britain’s Nathaniel Mayer Victor Rothschild, third Baron Rothschild, the Atlantic has had only a handful of owners in its 80-year history. Under the care of the Mullin Museum, the car has been shared with the public at numerous events and venues internationally.

“I’m beyond thrilled that the Atlantic is being considered for this extraordinary distinction amongst the world’s finest vehicles,” said Peter Mullin, founder and CEO of the Mullin Automotive Museum. “I’ve revered French artistry and design for nearly thirty years, seeking to share the extreme beauty and architectural curves of the genre with enthusiasts from around the globe. When my wife and I purchased the Atlantic with Rob and Melani Walton, we were enamored with the French signature styling. We’re honored to see it evaluated on this prestigious platform.”

ABOUT THE PETERSEN AUTOMOTIVE MUSEUM
The Petersen Automotive Museum Foundation is a non-profit 501(c)(3) charity. The Museum is located at 6060 Wilshire Boulevard (at Fairfax) in Los Angeles, California, 90036. Admission prices are $15 for general admission adults, $12 for seniors and students with ID, $7 for children ages 3 to 12. Active military with ID, personal care attendants and children under three are admitted free. Museum hours are 10 am to 6 pm. For general information, call 323/930-CARS or visit www.petersen.org.