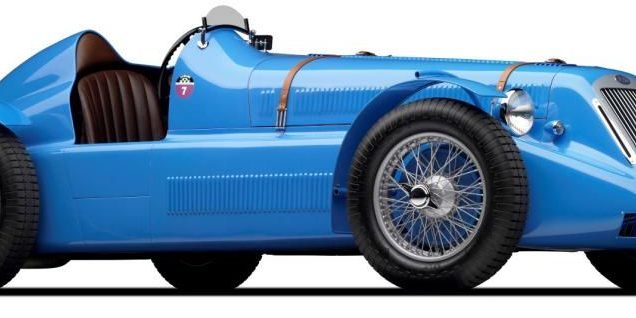 Oxnard, Calif. (August 3, 2022) – The Mullin Automotive Museum announces today it will display six exquisite vehicles at various events during Monterey Car Week on August 17-21, 2022. Guests of the Rolex Monterey Motorsports Reunion, The Quail, A Motorsports Gathering and the Pebble Beach Concours d’Elegance will have the opportunity to view prized classics, such as the 1946 Delage D6-3L racecar and the 1951 Talbot-Lago Type 26-GS.

“Monterey Car Week is always the preferred destination to showcase historic automobiles with enthusiasts from around the world,” said Mullin Automotive Museum Founder and CEO Peter Mullin. “With six of our vehicles on display across three events, we’re excited to bring a touch of French culture to the proceedings.”

The Mullin collection will be featured at the following events:

One of only five, the 1946 Delage D6-3L in the Mullin collection was considered lost until one curious owner researched his unusually shaped Delage. This car was the 1949 24 Hours of Le Mans and 1949 Grand Prix of Spa runner-up and will be driven by Matt Cobb.

The 1937 Talbot-Lago Type 26-SS is a particular Talbot-Lago race vehicle bodied by famous luxury coachbuilder Joseph Figoni. The car was built for the Talbot-Lago race team, but Tony Lago was dissatisfied with the first design and later approved the second. Luigi Chinetti’s race group bought the car next, where it would partake in the 1939 24 Hours of Le Mans before going into storage for World War II. The driver of this car will be Brian Mullin.

Delahaye only built 14 1936 Type 135 CS (Competition Special) Grands Prix, and this iteration took outright victory at the 1938 24 Hours of Le Mans. The Delahaye company motto was “Solid as a Delahaye,” and this example lived up to that. It was purchased for the 1936 racing season and survived dozens of races, and multiple crashes by several owners, to later be retired at the Mullin Automotive Museum.

The 1936 Bugatti Type 57SC Competition Roadster is one of Bugatti’s creations that sports a supercharger and a lower body compared to the typical Type 57 (giving it the SC in its name). The SC and Competition Roadster aspects aimed to pull from Bugatti’s racing heritage, with the open cockpit, lowered body, and supercharged engine allowing the 57SC to reach speeds of 135 mph.

The 1930 Bugatti Type 46 from the museum will be featured at The Quail, A Motorsports Gathering. The Type 46 was a grand touring model created in response to the 1929 stock market crash. Many were converted into military trucks during World War II and scrapped or destroyed after the war. The Mullins restored this fan-favorite in traditional coachbuilding fashion, with Merle Mullin carefully choosing the color scheme to match her Bottega Veneta handbag.

At the world-renowned Pebble Beach Concours d’Elegance, the Mullin Museum will display an impeccable 1951 Talbot-Lago Type 26-GS. This example won the Paris Auto Salon in 1951 for best custom coachwork and, after it began restoration in 2006, was unveiled at the 2010 Pebble Beach Concours d’Elegance, where it won First in Class. Each of these Grand Sport models was custom ordered for a wealthy patron, making this one of only 36 models produced from the Type 26-GS series.