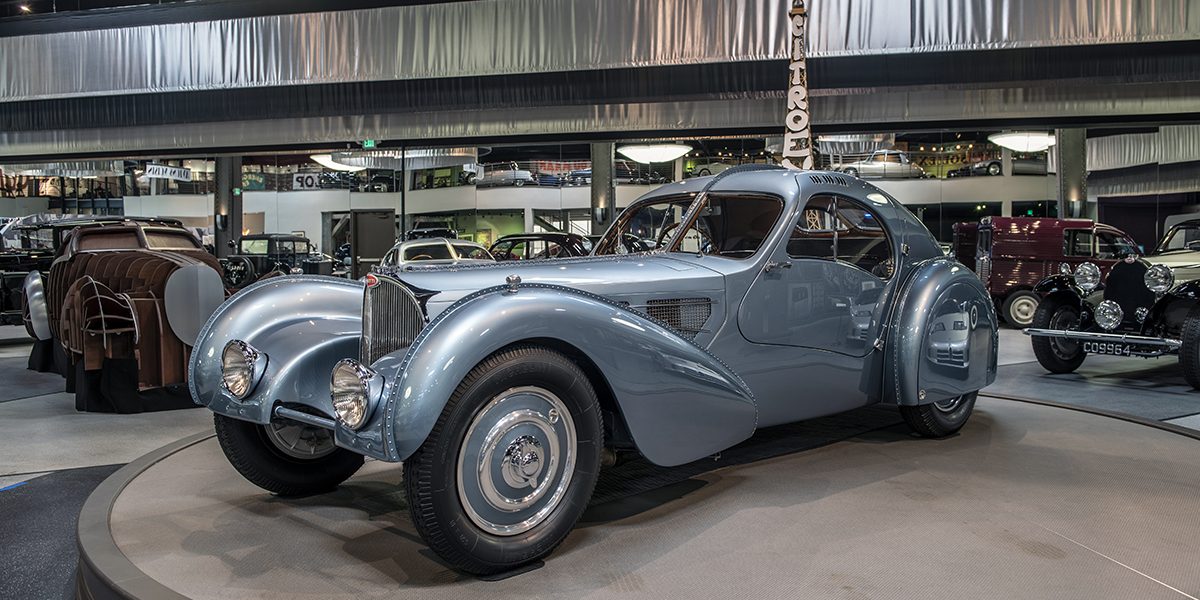 The exhibit will include the 1936 Bugatti Type 57SC Atlantic, 1939 Delahaye Type 165 Cabriolet and assorted art pieces from the Mullin’s exclusive collection

OXNARD, CALIF. (March 30, 2022) – Two of the most prized cars in the Mullin Automotive Museum’s collection of rare French automobiles are making their way overseas to give Europeans an exclusive chance to view the beautifully-designed cars in person. Several valuable pieces of automotive art from the Mullin will also be on display from April 5 to October 1, 2021, as part of the “Motion. Autos, Arts, Architecture” exhibit at the Guggenheim in Bilbao, Spain.

Opened by King Juan Carlos in 1997 in the Basque Country of northern Spain, renowned architect Frank Gehry designed the Guggenheim. The museum’s deconstructivist style with minimal corners or straight lines and its titanium skin makes the Guggenheim impossible to miss and an integral part of Bilbao. Masterpieces from the greatest artists of the last four decades, such as Yves Kline, Robert Rauschenberg, Andy Warhol, Gerhard Richter and Jeff Koons, have all been displayed at the Guggenheim.

On display at the Guggenheim from the Mullin Automotive Museum’s collection will be the recherche 1936 Bugatti Type 57SC Atlantic. Only one of two left in the world, the Atlantic is Jean Bugatti’s masterpiece built at the height of the Art Deco era. The influence of that period is easy to spot in the Bugatti’s beautiful and flowing futuristic lines. Fully-enveloped wheels, an intricately-designed scooped radiator shell, and hand-riveted roof seams pay homage to the era’s fascination with machine and design. The Atlantic won the prestigious “J.B. & Dorothy Nethercutt Most Elegant Closed Car” award at the 2021 Pebble Beach Concours d’Elegance.

Also, part of the exhibit will be the Mullin’s stunning 1939 Delahaye Type 165. Chosen to represent France at the 1939 New York World’s Fair, the aerodynamic bright red cabriolet is visually breathtaking. The extravagant coachwork features the voluptuous curves that became a signature of Figoni & Falaschi’s teardrop style. Dubbed “The Car of Tomorrow,” the Delahaye marked the end of an era for French carmakers as Europe and the United States became engulfed in World War II.

“The Atlantic and Type 165 are from a period when French automotive design was at its peak. Cars of that era were more about expressions of design, individuality and art than strictly function,” said Mullin Automotive Museum Founder Peter W. Mullin. “Having them at the Guggenheim is an honor and a recognition of the influence of automotive design on other artistic and creative forms. We are excited for European car and design enthusiasts to experience them firsthand.”

Unique pieces of French automotive-related fine art from the Mullin Automotive Museum will also display at the Guggenheim, including Rene-Jules Lalique’s glass sculptures “Vitesse (Goddess of Speed)” and “Victoire (Spirit of the Wind/Victory,” and Rene Lalique’s “Longchamps Horse Head-Single Mane.”

The Mullin Automotive Museum has earned worldwide recognition receiving the 2021 Historic Motoring Awards title of Museum/Collection of the Year. It is open from 10 a.m. to 3 p.m. every Friday and Saturday. To purchase tickets or for more information, visit www.mullinautomotivemuseum.com.