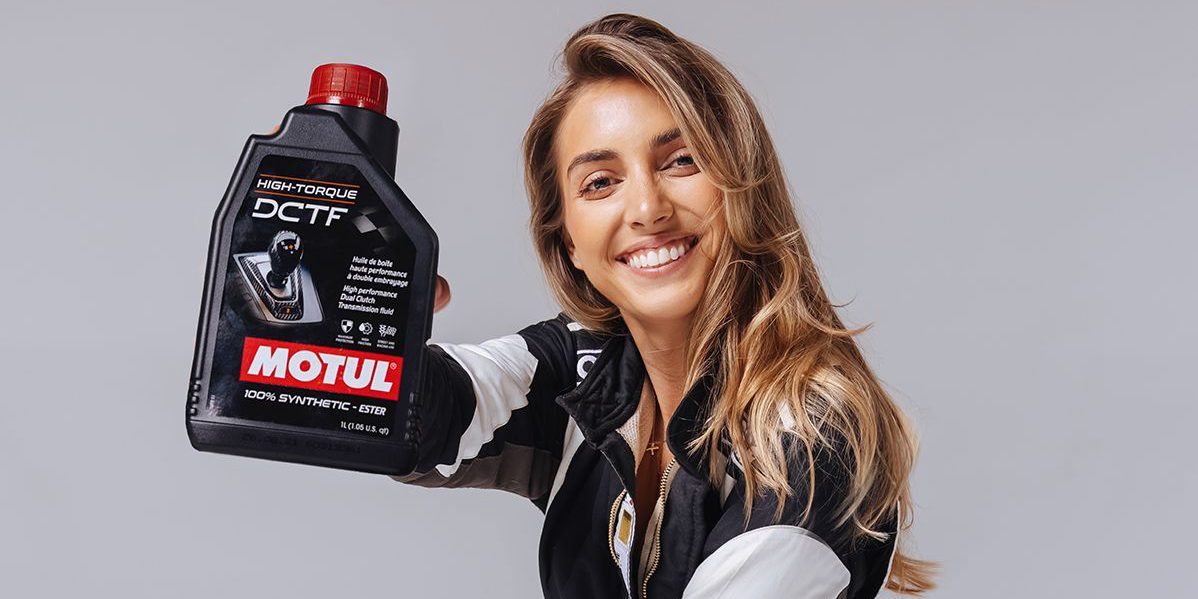 Cypress, Calif. (June, 2022) Motul, the world-class oil and lubricants company founded in 1853, is excited to announce its new High-Torque DCTF fluid for use in high-performance Dual-Clutch Transmission (DCT) equipped vehicles. The 100% synthetic Ester-based lubricant was specially engineered to withstand greater torque levels from the most demanding applications.

Developed as part of Motul’s line of motorsports products, along with Motul’s acclaimed 300V and RBF series, the High-Torque DCTF fluid began initial development on the circuits of Japan with racing teams from the Super GT series. As development continued, Motul’s laboratory desired data of the High-Torque DCTF fluid under extreme stress and sent an early formula in a “top secret” container to content creator and record-breaking car builder Emelia Hartford for use in her highly-modified C8 Corvette. Pushing the limit of her Corvette, Hartford tuned the engine to 1,400 horsepower and 1,100 lb-ft of torque, allowing the twin-turbocharged Corvette to tear through the quarter-mile in 9.36 seconds at 147 mph, making it the fastest C8 Corvette recorded at that time.

“Race teams, performance shops and tuners have been the go-to venues for testing high-performance technologies,” said Motul USA Brand Manager Nolan Browning. “In working with Emelia, we’re able to test our new High-Torque DCTF at the upper limits of performance, refine it and be a part of her record-setting campaign.”

The insights gained from this outing provided substantive information. Comparing the used fluid samples from the OEM Dual-Clutch Transmission fluid to the high-torque samples from Emelia’s Corvette, Motul was able to further optimize the commercial product for its launch.

“It was incredible honor to be a part of the testing and development for Motul,” said SAG-AFTRA actress and record-breaking car builder Emelia Hartford. “Never in a million years did I think I’d be working with a leading motorsport company to test some of their forthcoming oil on the world’s fastest C8 Corvette.”

Specially developed with a focus on motorsports, as well as tuned and high-performance road cars,
Motul’s High-Torque Dual-Clutch Transmission Fluid is available now in one-liter containers.

ABOUT MOTUL
Motul is a world-class French company specializing in the formulation, production, and distribution of high-tech engine lubricants (two-wheelers, cars, and other vehicles) as well as lubricants for the industry via its MotulTech activity. Present in more than 120 countries, Motul USA was established in 1989 as a subsidiary of Motul France and is based in Southern California. Motul is recognized as the specialist in synthetic lubricants. As early as 1971, Motul was the first lubricant manufacturer to pioneer the formulation of a 100% synthetic lubricant for automotive engines, the 300V lubricant, making use of Esters technology from the aeronautical industry.

ABOUT EMELIA HARTFORD
Emelia Hartford is a versatile and multi-talented SAG-AFTRA Actress, well known in the automotive industry for her award-winning driving capabilities  and social-media influence. From on-screen appearances hosting Discovery’s “SEMA: Battle Of The Builders” to Season 2 of Netflix’s “Fastest Car,” to premiering in Chevrolet’s highly anticipated 2023 Corvette Z06 National commercial and documentary, Emelia is a force to be reckoned with.

Emelia has been a leading face in the automotive industry for 4 years. In that time she has amassed well over 3M followers across platforms, all while challenging societal norms as a leading woman in the male-dominated automotive industry. As a content creator and digital force, Emelia independently hosts her own YouTube Channel, where she builds and races a broad genre of cars generating well over 100M+ views.