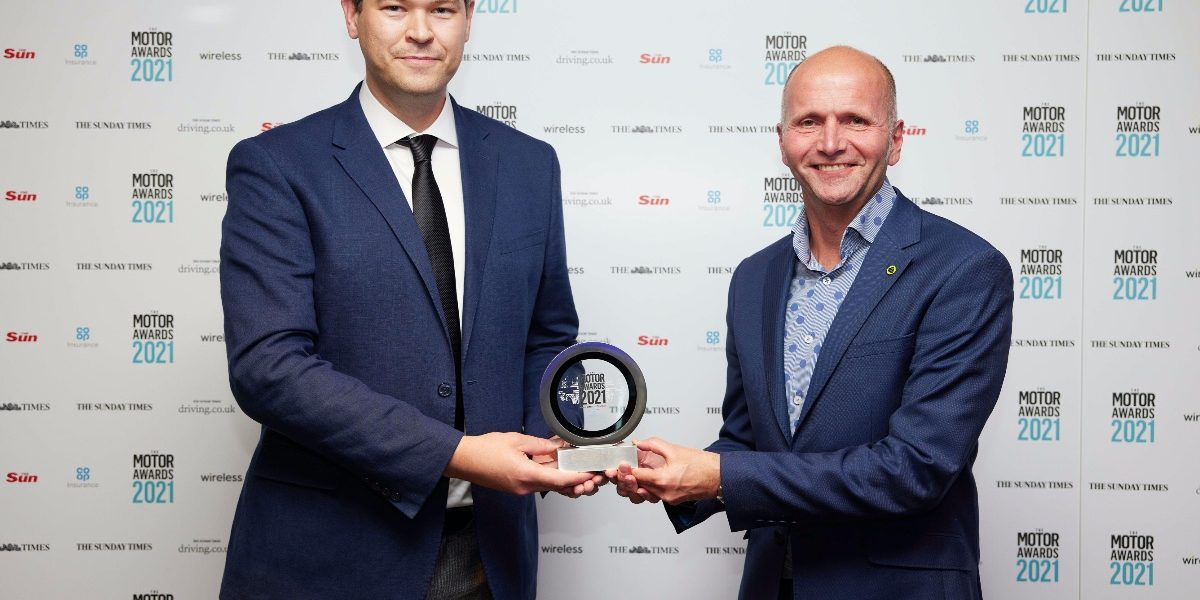 (Hethel, UK – 11 October 2021) – “The future is bright for one of the world’s most iconic car brands” – the words of Rob Gill, Motors Editor at The Sun, as Lotus was honoured as ‘Manufacturer of the Year’ at the News UK Motor Awards 2021.

The prestigious award was presented by respected political journalist and Times Radio presenter John Pienaar at an exclusive ceremony, and collected on behalf of Lotus by Design Director Russell Carr.

The judges included a number of highly respected motoring writers and commentators. Together they felt Lotus was a worthy winner as it has… “continued to up its game in the last 12 months, making impressive additions to its range and pioneering exciting new product development”.

On behalf of the judges, Rob Gill commented: “We are starting to see the first harvest from Geely’s huge investment in Lotus and, wow, the Evija and Emira are simply sensational. The Evija is the perfect blend of art and science, the Emira is a shrink-wrapped supercar, and the transformation of the historic Hethel HQ will warm the heart of every true car fan.”

He concluded: “The workforce has doubled to 1,700 people, Delia Smith is running the kitchen, and the famous old fountains have been switched back on again. The future is bright for one of the world’s most iconic car brands.”

Matt Windle, Managing Director, Lotus, said: “This is a massive honour for Lotus, and a tribute to everyone working tirelessly at our facilities all round the world to transform our business and brand. That transformation got underway with the launch of the world’s first British electric hypercar – the Evija – and was followed by its younger sibling – the Emira – revealed in July to a reception that’s been nothing less than sensational. Things are moving fast at Lotus, so watch this space – there is so much more to come.”

Collecting the award, Russell Carr commented: “Rob Gill’s reaction when he visited Hethel recently suggested we are doing something right – he seemed very impressed with all we have achieved, from the new design language on our cars to the refurbishment of the site. I didn’t expect it to lead to this wonderful award, but we’re very honoured and proud that all the hard work and achievements of Lotus in the last couple of years have been recognised in this way.”

The Motor Awards is in its fourth year and brings together the collective expertise and audiences of The Times, The Sunday Times, The Sun, Driving.co.uk and talkSPORT. Rob Walsh, Automotive Director, News UK, commented: “Motors is a cherished subject here at News UK, a love shared by our editorial teams and our readers and listeners. The ambition is therefore to celebrate motoring best in class and support the automotive industry during challenging economic times.”