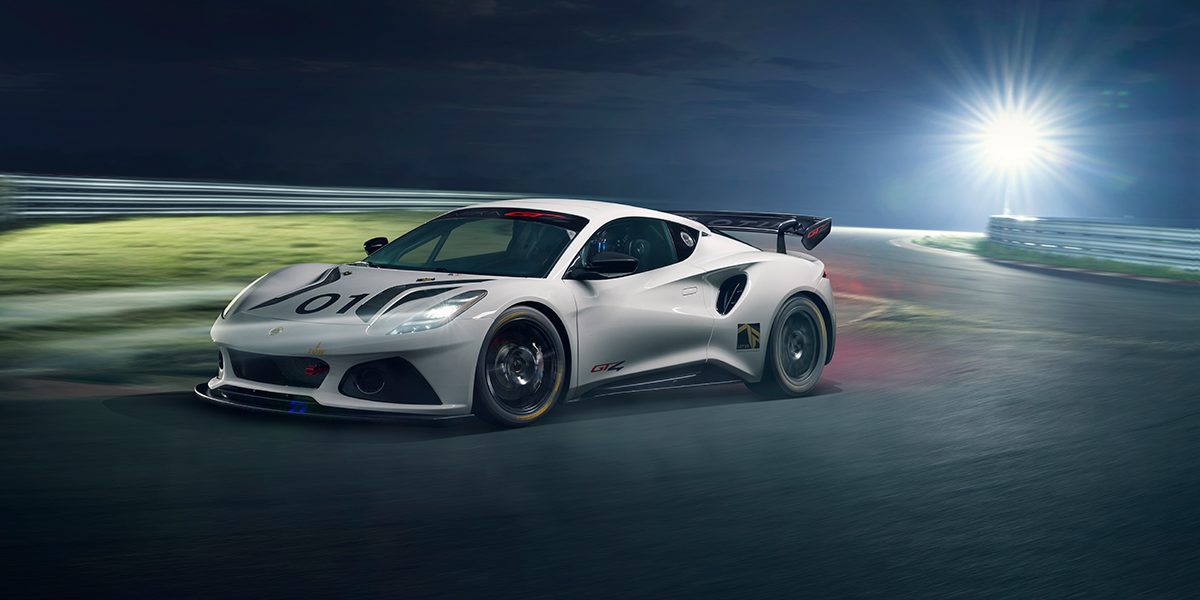 Lotus has unveiled the all-new Emira GT4 race car on the iconic Hethel test track, with a dynamic demonstration of its thrilling performance.

At an exclusive event earlier this week VIP guests were treated to passenger laps of the legendary 2.2-mile circuit with Gavan Kershaw, Director of Vehicle Attributes at Lotus and a former British GT Championship winner, at the wheel.

The culmination of more than 70 years of innovation on the road and track, the Emira GT4 marks the start of an exciting new era in performance GT racing for Lotus. It is the first new model from Lotus Advanced Performance, the bespoke vehicle and experiential division of the business launched earlier this year.

The return to world motorsport is a key pillar of the company’s transformation from a UK sports car company to a global performance car business and brand.

This week’s event follows last September’s announcement that Lotus would create a GT version of the critically acclaimed Emira road car. Order books for the Emira GT4 opened at the time and the car has sold out for the first year of production.

Gavan Kershaw, who has been heavily involved in the development, commented: “We knew we had an excellent starting point for the Emira GT4 because of all the work done to make the road car such a great performer. Showing off the GT4’s dynamic capabilities on the Hethel test track – which has shaped countless race cars and their drivers since Lotus moved to the site in 1966 – is a very special moment for me and all the team involved.”

Almost all modern Lotus road cars have had race-ready siblings and the Emira is no exception. Each Emira GT4 customer will receive a homologated performance machine, hand-built with lightweight motorsport components and equipment to meet the latest safety regulations. The project has been a collaboration with Lotus and RML Group.

Since last September’s announcement, the Hethel-based development team has focused on precision engineering to deliver outstanding dynamics and high-speed stability. Many hundreds of hours of validation work have taken place on the test track, and over the winter the Emira GT4 also headed to Portimão in Portugal for a week. In addition to the better weather, it’s one of the most challenging circuits in Europe, making it the perfect destination to validate aero performance and component reliability.

Richard Selwin, Race Programme Manager, Lotus, commented: “We’re delighted with how the Emira GT4 programme has progressed. We have an appealing spec and a level of performance that’s going to thrill both customers and spectators around the world. I believe in the Emira GT4 we have a car that promises to be more than competitive.”

Also at Hethel for the Emira GT4 launch event was a Lotus Type 30 sports racer. This white 1965 GT is powered by a Ford 4.7-litre V8, is privately owned and won the Whitsun Trophy at last year’s Goodwood Revival. Only 33 examples of the Type 30 were built and achieved numerous wins in the hands of Lotus legend Jim Clark and others.

Lotus has been synonymous with racing success ever since the Mark I, a trials car hand-built by founder Colin Chapman in 1948, and the company has pioneered many of the technical innovations which make racing the thrilling sport it is today. Lotus’ impressive roll-call of honours includes seven Formula 1 Constructors’ titles, six Drivers’ Championships and victory in the legendary Indianapolis 500.

Most recently Lotus has been racing with the Evora GT4, which won prestigious races and championships including in British GT, Dubai 24hrs, Barcelona 24hrs, European GT, Sepang 12hrs and the Pirelli World Challenge.

Lotus aims to fulfil customer orders for the Emira GT4 race cars during 2022, increasing production for 2023 in line with global demand. Interested parties are invited to contact the Lotus motorsport department directly via motorsport@lotuscars.com

*Subject to balance of performance