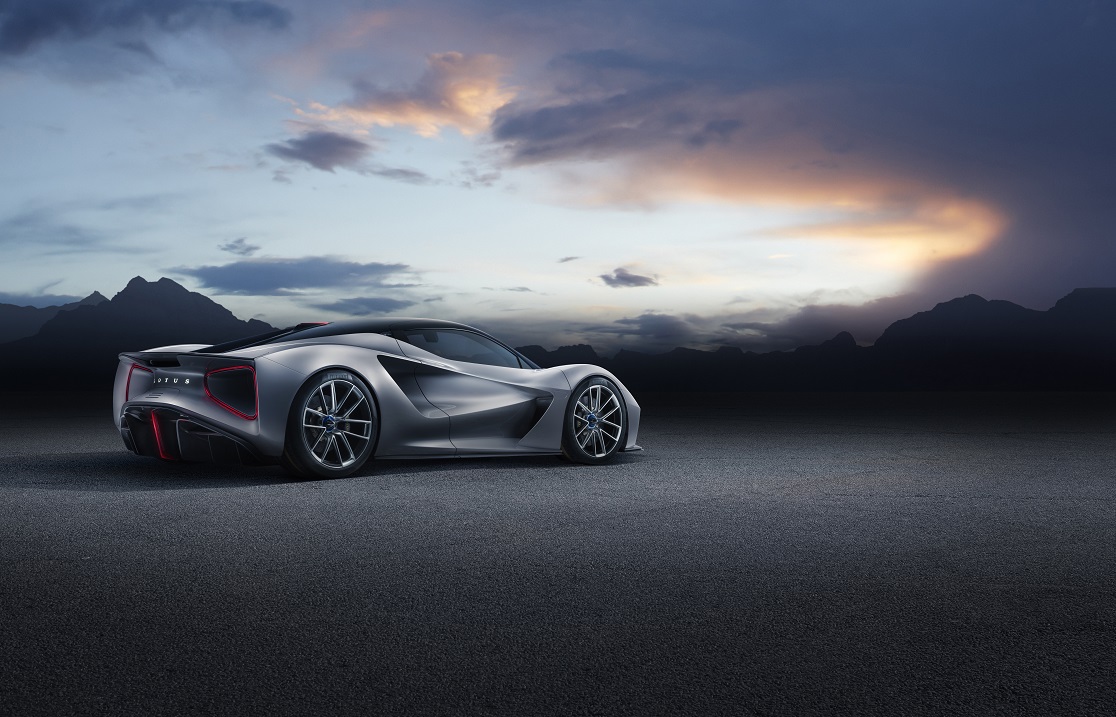 The world’s first all-electric British hypercar made its global debut in July, and the popular and influential west coast festival of motoring is the first stop on a high-profile world tour.

The news comes as Lotus confirmed it took the first Evija order from a North American customer on the day the car was revealed.

The Evija is the most powerful and dynamically accomplished road car in the history of Lotus, and sets a new standard for Lotus driving performance. It is the first all-electric British hypercar and the first Lotus with an electrified powertrain. It is also the first new model since Geely took control in 2017.

A technical tour de force, the Evija is illustrative of the innovative thinking and ingenuity that has always been part of the Lotus DNA. With a target output of 2000 PS, it is the world’s most powerful series production road car. It has been designed and engineered in the UK, and will be produced at Hethel, UK, the home of Lotus since 1966. Exclusivity is guaranteed, with production limited to a maximum of 130 cars. Full technical details can be found on the Lotus media website at https://media.lotuscars.com.

Monterey Car Week is an annual automotive extravaganza, staged from 9-18 August at various locations on the California peninsula. It’s a pilgrimage for prestige, luxury and performance car fans, attracting thousands of visitors from across the USA, Canada and beyond.

The Lotus Evija has been one of the most eagerly anticipated new cars of 2019, with huge amounts of media attention and customer interest since it was launched at a private event in London. At Monterey Car Week it is scheduled to appear at ‘The Quail: A Motorsports Gathering’ on Friday 16 August. It’s an opportunity for car fans to view rare automobiles and motorcycles in a garden-party setting on the rolling greens of Quail Lodge & Golf Club. A Lotus press conference is scheduled for 9.15am.

Two days later, on Sunday 18 August, the Evija will be at Pebble Beach Concours d’Elegance. It’s one of the world’s most prestigious and best-known car collection competitions, staged on the 18th fairway of the iconic Pebble Beach Golf Course.

The North American debut of the Lotus Evija will provide Monterey Car Week visitors with a chance to see its striking exterior design for themselves. Russell Carr, Design Director, Lotus Cars will be attending and commented: “I’m expecting the Lotus Evija to be a huge draw at both locations. They’re famous for playing host to some of the world’s most rare and beautiful cars, so the Evija will be perfectly at home.”

Following Monterey Car Week the Evija will be at Galpin Lotus in Los Angeles, the brand’s retailer located in the suburb of Van Nuys, from 21 August. For further information please contact Camille Landry on clandry@lotuscars.com.

While the Evija will be causing a stir on the west coast, it is already found one fan on the east coast. Following the high level of interest in the car, a number of formal ‘agreements to purchase’ are now in place. Of the orders taken, Lotus has confirmed a customer from Miami, Florida became the first North American to buy an Evija. The order was placed on the day the car was revealed.e

Lotus Engineering provides comprehensive and versatile consultancy services to many of the world’s OEMs and Tier 1 suppliers and is an internationally recognised automotive engineering consultancy.