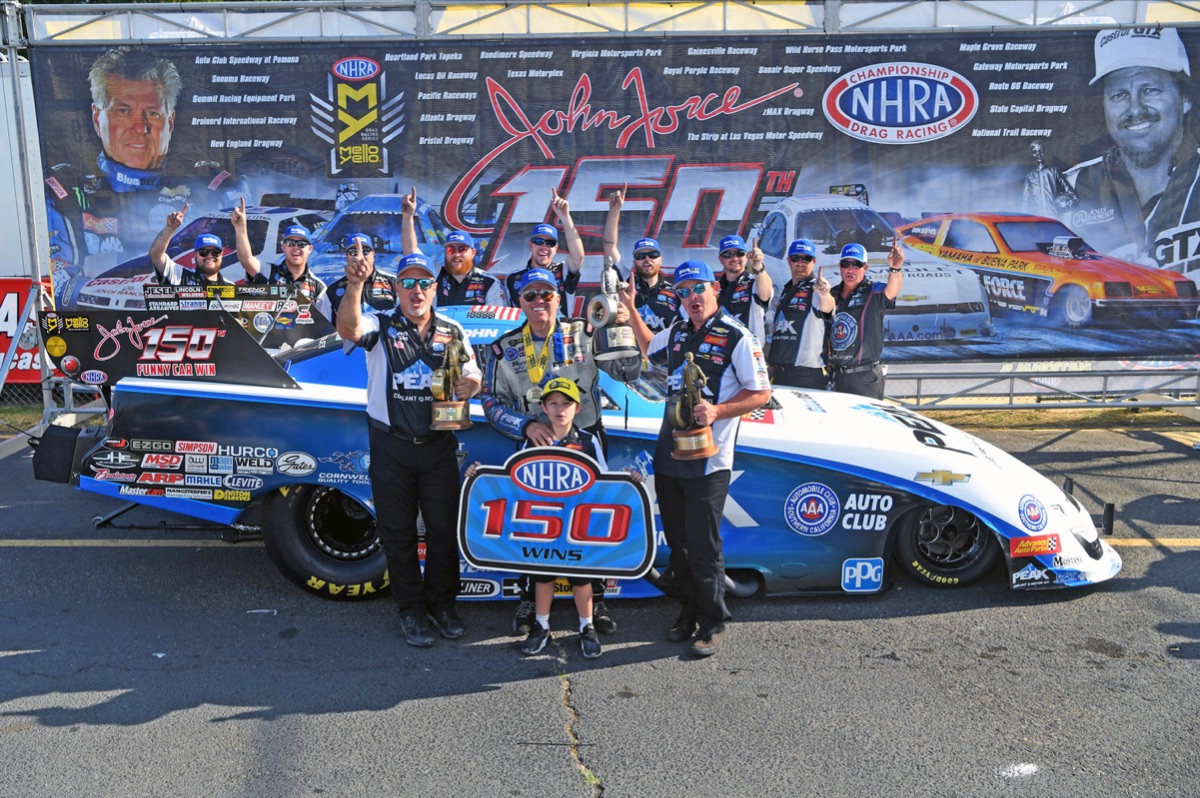 The TEAM PEAK sponsored Hall of Fame champion has won more races, rounds and championships than anyone else in professional drag racing history

Force, the 16-time Funny Car champion and 20-time championship-winning car owner, continues to solidify his legacy as the most dominant drag racer in the sport after securing his 150th career win. Force, the oldest winner in professional motorsports, has finished in the Top Ten in points 34 straight seasons and continues to lead his sport when most drivers would have called it a career.

“Leading a championship team requires commitment and sacrifice,” said John Force, driver and CEO of John Force Racing, Inc. “I’ve always set goals for myself and my team, and I looked at Richard Petty who won 200 in NASCAR, heck, not like I’ve ever even raced the guy and I’m not sure I’ll get there in my lifetime, but PEAK and Old World Industries gave me an opportunity to race. They gave me an opportunity and extension on my career to be able to get to 150.”

“The Old World Industries family of brands took me in as part of that family,” Force continued. “The same commitment I have to winning and building this team, they have shown to truck drivers like me when I first got my start. Since before I started racing, I was driving big rigs and now I’ve got 10 trucks that keep this traveling circus afloat. Old World Industries brands represent more than a line of products, they represent the backbone of America.”

For over 47 years, Old World Industries, a family-owned entrepreneurial company and the maker of PEAK and BlueDEF brand products, is a leader in the manufacturing and distribution of high-quality automotive and heavy-duty fluids. Old World Industries is committed to performance and innovation for America’s car and truck drivers, developing products that, over the years, equal to billions of miles on the road.

“We are incredibly proud and honored to be behind John Force and his 150th career win,” said Charles Culverhouse, CEO of Old World Industries. “Force represents the true grit and commitment it takes to be a legend in drag racing. PEAK and BlueDEF partner with champions like Force to highlight the excellent performance and category leading innovations of our brands.”

PEAK and BlueDEF are high performance brands that consumers have learned to trust over the years, making them leading brands in the automotive aftermarket. For more information on Old World Industries and their family of brands, visit www.peakauto.com.