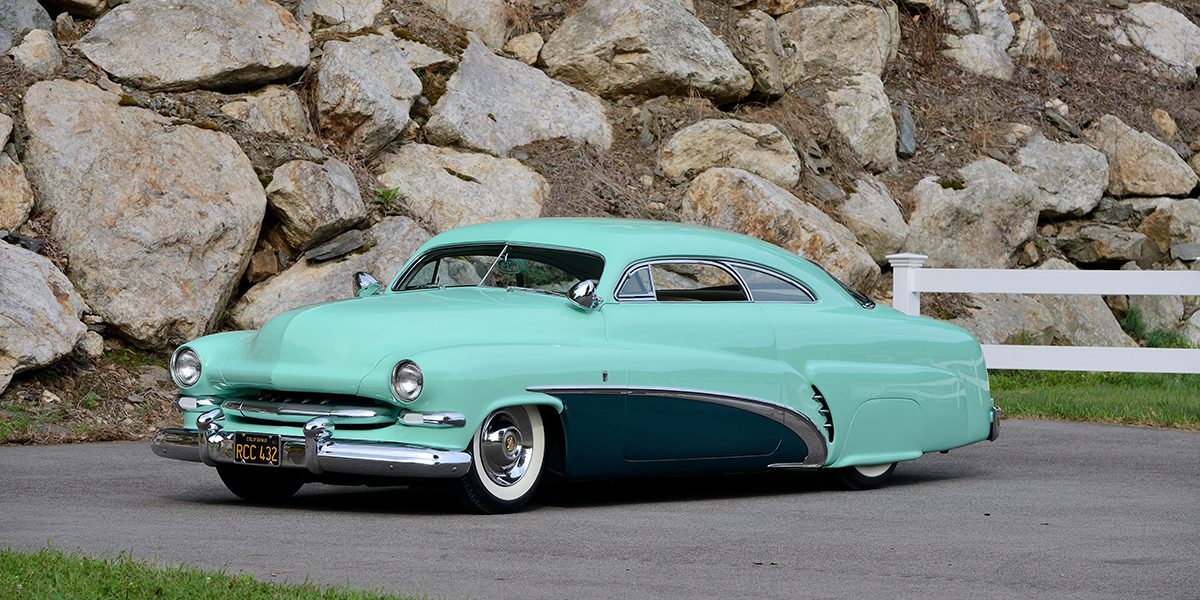 The 1951 Mercury Coupe built by Sam and George Barris, one of history’s most famous and rarely seen custom cars, will make its first public appearance after joining the upcoming Barris display at Galpin Motors.

Pomona, Calif. (Jan. 26, 2022) – The 1951 Mercury Coupe known as the “Hirohata Merc” will make its debut appearance under new ownership at the Grand National Roadster Show, held at the Pomona Fairplex Jan. 28-30. The legendary Hirohata Merc sold earlier this month at the Mecum collector car auction in Kissimmee, Florida.

“Grand National Roadster Show has become the hub of hot rod and custom car culture over the last 72 years,” said John Buck, producer of the Grand National Roadster Show. “To welcome what has become the undisputed king of custom car culture is such a treat and offers a taste of what visitors can expect from the near 1,000 cars and trucks they will see at the show. We owe a huge thanks to owner Beau Boeckmann and the entire Galpin team for choosing our show to host this amazing piece of custom history.”

Named after the 21-year-old Japanese American Navy veteran Masato “Bob” Hirohata, who commissioned the custom build in 1952, the Hirohata Merc was created by Sam and George Barris. George Barris is known throughout the world as the original King of Kustomizers. His creations are legendary in the automotive world and for their presence in television and motion pictures, including the likes of the Batmobile, the Munster Koach, the “Beverly Hillbillies” Model 46, KITT from “Knight Rider” and more.

The Hirohata Merc is considered the pinnacle of “Kustom Kulture” by many and boasts the awards to back it up, including class wins from the 1952 Petersen Motorama to the 2015 Pebble Beach Concours d’Elegance. It was also on the cover of Hop Up magazine in March of 1953 and was featured in Hot Rod and Rod & Custom the same year. The Hirohata Merc is one of only 30 automobiles listed on the National Historic Vehicle Register.

The car has a storied past, having changed hands several times and even serving as a high-school daily driver before vanishing from public view for approximately 20 years. After reemerging, the Merc underwent an exhaustive restoration before returning to several high-profile events, one of which was the “Customs Then and Now” display at the 2011 Grand National Roadster Show.

For tickets to see the Hirohata Merc at the Grand National Roadster Show, visit www.hotrodshows.com or purchase in-person at O’Reilly Auto Parts stores. The car will be on display in building 4 while Galpin’s booth will be just outside the same building.

About Rod Shows
Based in the automotive cultural hub of Southern California, Rod Shows produces the West Coast’s premier indoor hot rod and custom shows, including the Grand National Roadster Show and the Sacramento Autorama. Its professional show management team sets the highest standards for top-quality competition and displays with every show and personally visit the country’s top automotive coachbuilders and events throughout the year, ensuring the Best of the Best participate in its events. For more information, visit www.rodshows.com.