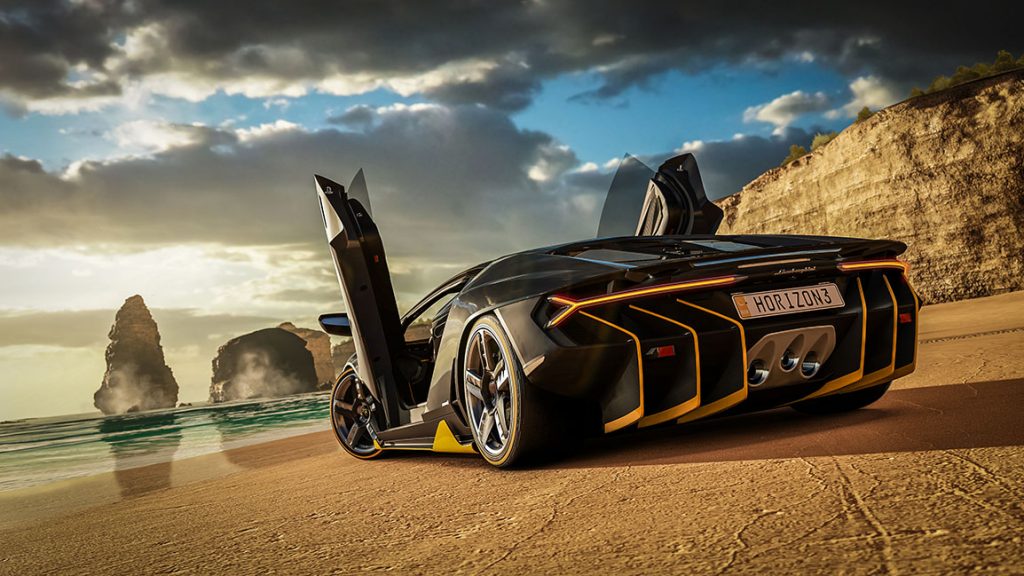 DJ Flow and Peanut Butter Wolf to spin music and kick off Forza Horizon 3 launch party at the Petersen Automotive Museum on Saturday, September 24th, 2016 from 3 PM to 7 PM. Free event will allow guests to be some of the first to experience the brand new game edition in the Forza franchise.

Los Angeles, Calif. (September, 2016) – The Petersen Automotive Museum will host the launch party for the next installment in the wildly popular Forza Horizon franchise, Forza Horizon 3. The launch party will be on Saturday, September 24th from 3 PM-7 PM at the Petersen Automotive Museum and will feature an appearance by the incomparable Ken Block who is featured prominently in the game, as well as simulator demos, music by DJ Flow and Peanut Butter Wolf and food by Drago. The event is free to the first 500 that RSVP on Petersen.org.

The launch party event will take place on top of the parking structure of the Petersen Museum following the Petersen’s monthly Breakfast Club Cruise-In which is open to local car clubs. The launch event will have several Lamborghinis provided by O’Gara Beverly Hills on display, including an Aventador Roadster, multiple Huracans, and a Gallardo LP560-4. Several notable Ford Performance vehicles including Ken Block’s Gymkhana 9 Ford Focus RS and the Ford Performance F-150 Raptor racing truck will also be on display at the Forza festival. Ken Block will be in attendance and available to meet fans. Guests will be treated to an exclusive preview of Forza Horizon 3, while DJ Flow and Peanut Butter Wolf are spinning music. The event will also feature food by the Drago Brothers. For those who can’t attend, the event will be streamed via Twitch.Tv.

“We’ve been so fortunate to partner with Microsoft and the folks from Turn 10 Studios in creating the amazing Forza Motorsport Experience at the Petersen. They’ve been incredible to work with and hosting this event is a natural given our mutual successes with our shared audiences. The icing on the cake is having Ken Block and some amazing vehicles from Ford Performance here as well,” said Adam Langsbard, chief marketing officer for the Petersen. “It’s going to be yet another fantastic, sell-out event.”

The original Forza Horizon game was a radical departure from the standard racing game model when it came out in 2012. The combination of real cars, intense racing and an open world environment made Forza Horizon stand out from other car games. The sequel built on that formula but managed to improve on nearly every aspect of the original. Forza Horizon 3 will again be set in an open world, sandbox-style environment though this time in Australia and in a map that’s nearly twice as large as the map from Forza Horizon 2. There will be at least 350 cars available to drive at launch with more coming in the form of DLC later on.

“Since the beginning, Forza’s mission has been to turn gamers into car lovers, and car lovers into gamers,” said Dan Greenawalt, Creative Director at Turn 10. “Right now there are few people out there that are doing more to spread the love of cars and car culture than Ken Block. We’re thrilled to be working together with him on this project.”

For more information on this exhibition or on the Petersen Museum, please visit www.Petersen.org.

ABOUT THE PETERSEN
The Petersen Automotive Museum Foundation is a non-profit 501(c)(3) charity. The Museum is located at 6060 Wilshire Boulevard (at Fairfax) in Los Angeles, California, 90036. Admission prices are $15 for general admission adults, $12 for seniors and students with ID, $7 for children ages 3 to 12. Active military with ID, personal care attendants and children under three are admitted free. Museum hours are 10am to 6pm. For general information, call 323/930-CARS or visit www.Petersen.org.