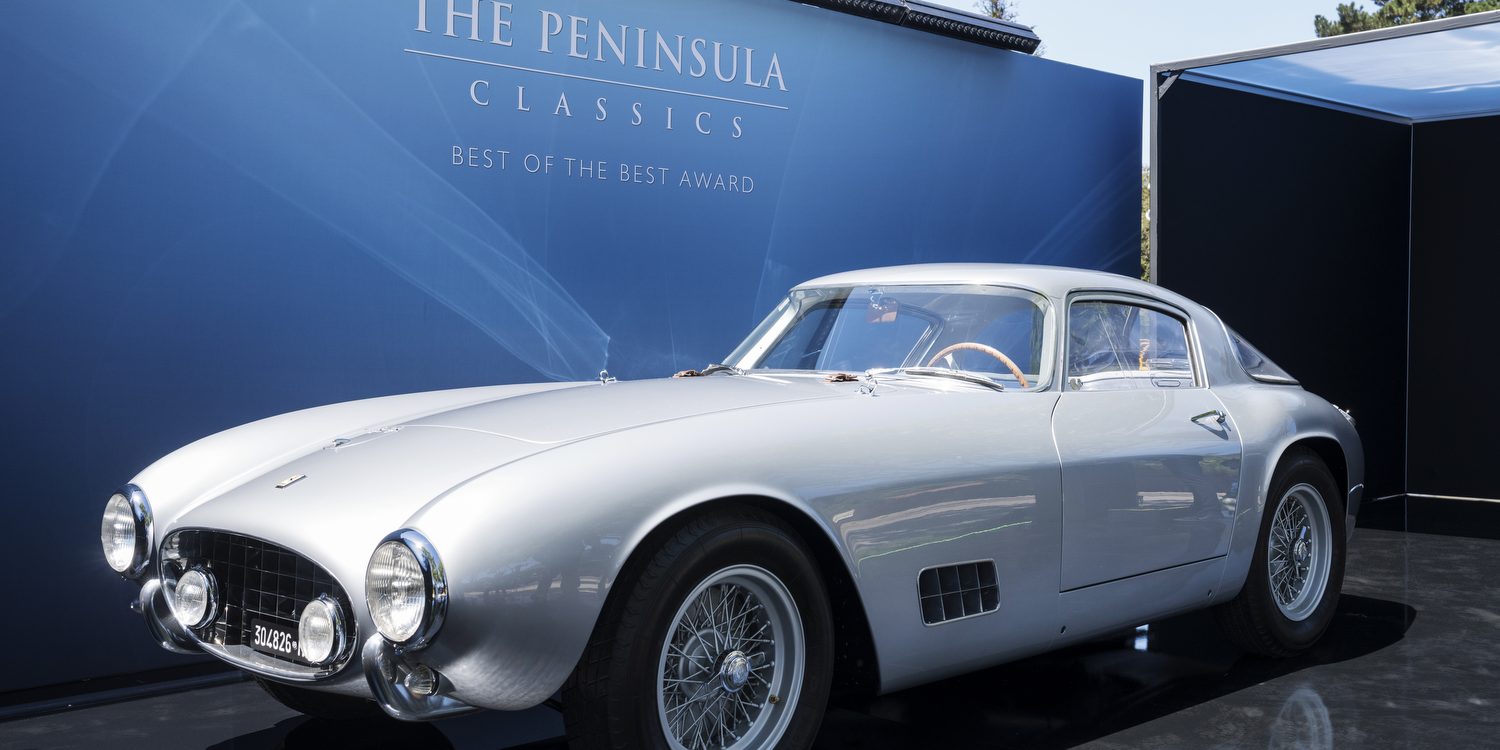 (14 August 2022) – The Peninsula Hotels, whose international hospitality brand has epitomized glamour and luxury for nearly a century, recently announced the 1956 Ferrari 250 GT Berlinetta Competizione as the winner of its highest honor, The Peninsula Classics 2021 Best of the Best Award. The exclusive accolade selects a winner from an elite group of exceptional classic cars that have won significant awards at the previous year’s most prestigious concours events. The Ferrari became eligible for consideration after winning the Best of Show trophy at the Concorso d’Eleganza Villa d’Este.

One of nine 250 GT Berlinetta Competiziones ever built, the 1956 Ferrari has an extensive motorsports heritage competing in the famous Mille Miglia, several hill climbs and the 1959 Tour de France. During its racing career, the Ferrari was modernized by Carrozzeria Scaglietti with a lowered nose, smaller grille, covered headlamps and a rear spoiler. Years later, it was discovered that this 250 GT was fitted with the first prototype of Ferrari’s 12B V12 engine. The rarity of the 1956 Ferrari 250 GT Berlinetta Competizione, its racing pedigree and meticulous restoration helped it stand out from a field of competitors and win the coveted Best of the Best Award.

Also competing for the award this year was a distinguished group of finalists, including a 1957 Ferrari 250 GT Berlinetta Tour de France, a 1974 Lancia Stratos HF Stradale and three variants of the 1938 Mercedes-Benz 540 K. Other nominees were a 1926 Suiza H6B Cabriolet and a 1934 Avions Voisin Type C27 Aerosport Coupe. They all received the highest awards from the most esteemed concours events of 2021.

“With such an illustrious selection of finalists this year, the judging process was especially challenging,” said The Hon. Sir Michael Kadoorie. “Our group of eight classic automobiles represents the pinnacle of automotive craftsmanship, artistry and engineering. All of them are excellent representatives of automotive history, but one rose to the top to receive our highest honor and recognition with The Peninsula Classics 2021 Best of the Best Award.”

After its early motorsports achievements, the 1956 Ferrari 250 GT Berlinetta Competizione was sold to Claus Ahlefeld of Denmark in 1968. It remained in Ahlefeld’s extensive private collection for 32 years. During the majority of that time, the rare Ferrari was on display at the Egeskov Veteran Car Museum, which houses an outstanding collection of vintage cars and aircraft.

In 2000, Sam and Emily Mann acquired the car and began an extensive restoration process to return the 250 GT to its initial configuration. The body was repainted in its original silver-grey colour and refitted with a blue leather interior. Six years after its detailed restoration and 50 years after its construction, the Ferrari was displayed for the first time and awarded Platinum honors and the Gran Turismo Cup for Best of Show GT at the Cavallino Classic.

After being purchased by its current owner in 2016, the 1956 Ferrari 250 GT Berlinetta Competizione was shipped to Bacchelli & Villa in Italy for further work by the renowned restoration facility. After certification by Ferrari Classiche, the 250 GT obtained the coveted Red Book before winning Villa d’Este Best of Show and The Peninsula Classics 2021 Best of the Best Award.

“Winning the Best of the Best Award is a great achievement and a true honor,” said Mr. Brian Ross, owner of the 1956 Ferrari 250 GT Berlinetta Competizione. “It is a magnificent recognition of the multiple years spent trying to get my hands on this 250 GT and the hard work that went into the years-long restoration process. All of the other nominees have fantastic vehicles so I am incredibly humbled to be selected by the acclaimed judges for this award. Winning Best of the Best is a true dream.”

The Peninsula Classics 2021 Best of the Best Award celebration was hosted for the first time on the beautiful grounds of the Quail Lodge & Golf Club in Carmel, California, on August 14, 2022.

About The Peninsula Classics Best of the Best Award
Through a shared desire to celebrate the best of what defines the automotive world, The Hon. Sir Michael Kadoorie, Chairman of The Hongkong and Shanghai Hotels, Limited, launched The Peninsula Classics Best of the Best Award in 2015 with co-founders William E. (Chip) Connor, Bruce Meyer and Christian Philippsen. Each founder shares a common passion and appreciation of fine motor cars, the preservation of their heritage and immaculate restoration projects. The award, sponsored by The Peninsula Hotels, brings together the concours circuits’ elite ‘Best of Show’ winners from around the globe.