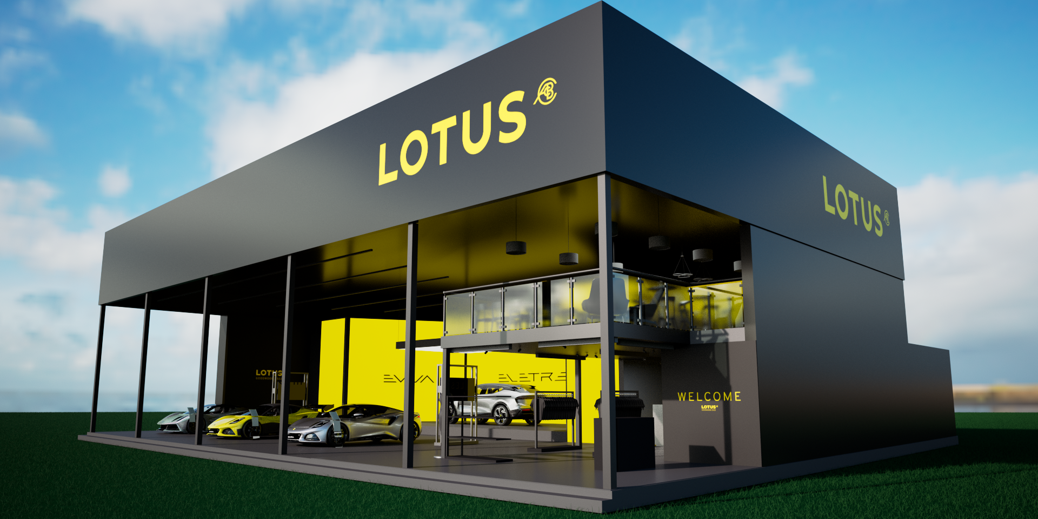 (Hethel, UK – 22 June 2022) One of the world’s most eagerly anticipated performance cars, the Lotus Eletre hyper-SUV, will make its world debut in public later this week at the Goodwood Festival of Speed.

Unveiled on 29 March, the bold, progressive and exotic EV has the soul of a Lotus and the usability of an SUV. It will take centre stage on the all-new Lotus stand at the UK’s biggest four-day annual showcase of motoring and motorsport.

And if last year’s event is anything to go by – when car fans queued round the block to see the all-new Emira, unquestionably the star of the show – the Lotus stand will be a huge attraction once again.

Goodwood also marks the public premiere of the ultimate three-car garage from Lotus, as the Eletre will be joined on stage by the beautiful Emira sports car and the pioneering Evija hypercar – a whole new generation of Lotus performance road cars. And creating a four-car family will be the Emira GT4; the race car was unveiled just last month, making its dramatic dynamic debut on the test track at Hethel, the home of Lotus since 1966.

The Emira GT4 will be in the thick of the action on the iconic Goodwood Hill Climb on Thursday, Friday Saturday and Sunday, as will the Emira and Evija. And look out for Formula 1 world champion Jenson Button, who will be behind the wheel and on the Lotus stand at selected times during the event.

Matt Windle, Managing Director, Lotus Cars, commented: “Last year we were the featured marque at Goodwood Festival of Speed and all eyes were on the Emira. The attention it attracted and the deposits we took on the stand were phenomenal. Fast forward 12 months… another Festival, another new car from Lotus. The Eletre is equally as exciting for us; the most significant milestone yet in the ongoing transformation of Lotus and something genuinely different to everything else on the market. We can’t wait for another exceptionally busy and very successful Goodwood.”

The Lotus Eletre – which can also be seen in the event’s Electric Avenue showcase – is the first of a new breed of pure electric SUVs. It takes the core principles and Lotus DNA from more than 70 years of sports car design and engineering, evolving them into a desirable all-new lifestyle car for the next generation of Lotus customers.

The company’s famed expertise in the fields of ride and handling, steering and optimised aerodynamics have been carefully and respectfully evolved. The Eletre takes the heart and soul of the Emira and the revolutionary aero performance of the Evija, and reinterprets them as a hyper-SUV.

A bold new dimension to the Lotus performance car portfolio, the Eletre delivers a significant number of firsts for Lotus – the first five-door production car, the first model outside sports car segments, the first lifestyle EV, the most ‘connected’ Lotus ever. And yet it remains a true Lotus, a beautiful car ‘carved by air’, packed with pioneering technology, genuine sporting performance and simplicity of purpose, designed and developed by a passionate and global team.

The Eletre is 4WD, has a battery capacity that’s over 100kWh and with power range from 600hp to 900hp. A 350kW charger will deliver a 400km (248 miles) range in just 20 minutes. The car’s target maximum WLTP driving range is circa 600km (373 miles). It also comes with the ability as standard to accept 22kW AC charging which, where available, reduces the time plugged in.

Technology includes the most advanced active aerodynamics package on any production SUV, and intelligent driving technologies such as the world’s first deployable Light Detection and Ranging (LIDAR) system in a production car. Add in a dynamic walk-up sequence that delivers a moment of theatre every time the driver approaches the car, and it’s clear the Eletre is making a simple statement – this is Lotus reinvented, the birth of a new icon into the Lotus stable. Production starts at an all-new state-of-the-art factory in China at the end of this year and first customer cars will arrive in Europe in spring 2023.

The Lotus Emira GT4 marks the start of an exciting new era in performance GT racing for Lotus. It is the first new model from Lotus Advanced Performance, the bespoke vehicle and experiential division of the business launched earlier this year. The first year of production is already sold out.

The return to world motorsport is a key pillar of the company’s transformation from a UK sports car company to a global performance car business and brand.