Earned vs Paid vs Owned Media: What You Don’t Know Can Hurt You 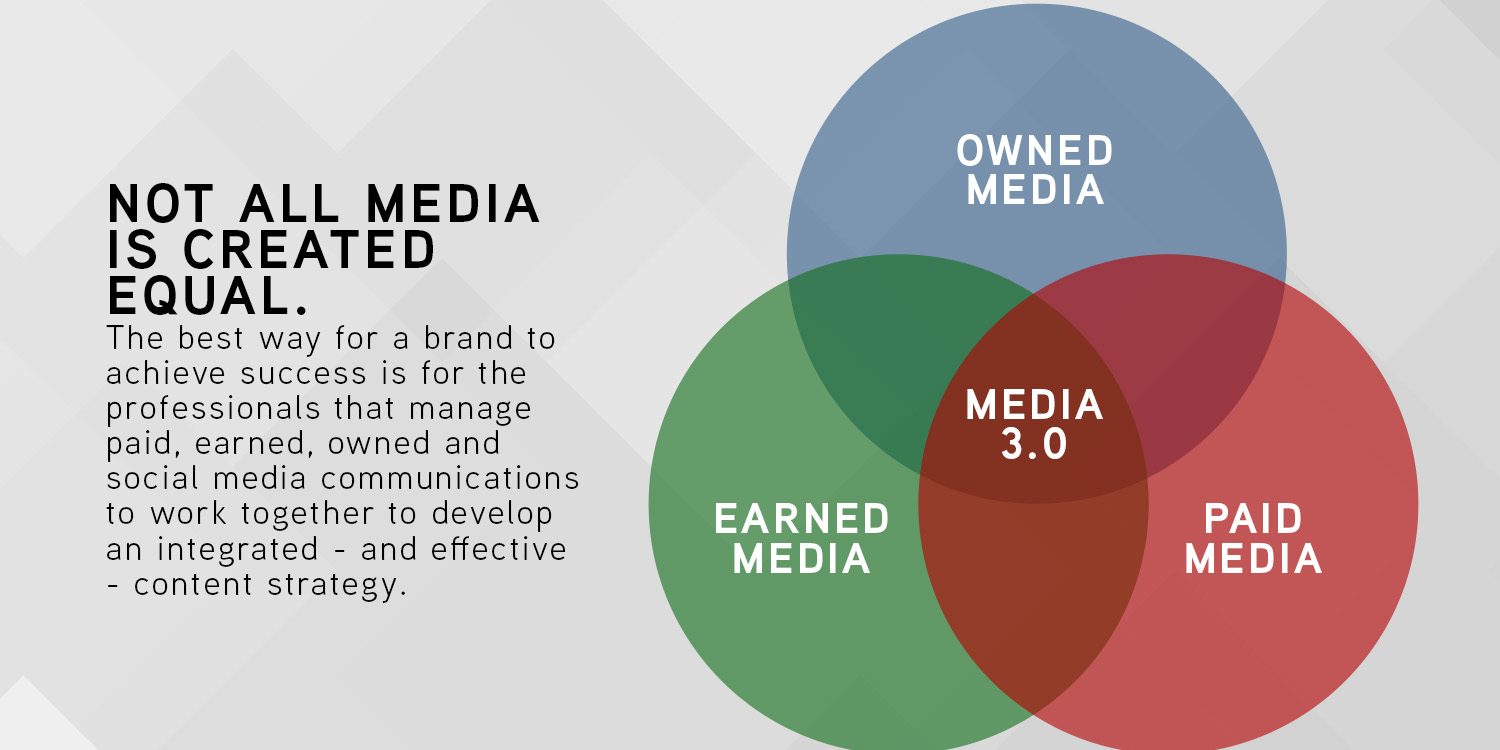 Not all media is created equal. There’s earned media, paid media and owned media, and each has its advantages and disadvantages. To make sure your company’s marketing is firing on all cylinders, you should be using all three — in the right ways — to get the best results.

So what’s the difference?

For decades, there was only earned media and paid media. Earned media was content about your company in magazines and newspapers or on radio and TV, which could happen organically or be generated through PR efforts. Paid media was ads, plain and simple. But now that every company has a website, social media channels, e-newsletters and so on, owned media has become an important part of every company’s marketing strategy.

Earned media, paid media and owned media are different, but they are interrelated, as shown in the diagram above. They feed into and support each other, sort of like the legs of a stool. Focusing too much on one or two at the expense of the others is a mistake and will leave your marketing unbalanced. Where all three come together — and where there’s the most horsepower — is what we call Media 3.0.

We all know there’s nothing like a word-of-mouth referral. When someone says something good about your company and encourages others to patronize your business, you know you’re doing something right. We listen to people we trust and we tune out people we don’t. Whether it’s one of your customers raving about your company to his friends, either in person or on social media, or a respected journalist or popular influencer writing a glowing review, the source of that information is more credible because they have no vested interest in your business.

Press coverage, social media mentions, shares and retweets, product or company reviews (either on your own website or on Amazon, Google or Yelp), and blog posts written by someone who doesn’t work for you are all examples of earned media. And the more trustworthy the source, just like with a word-of-mouth referral, the bigger the impact. That’s why earned media is considered the gold standard.

The main advantage of earned media is that it has — of its credibility — the biggest impact on consumer behavior. Its main disadvantage is that, because someone else creates it, you have the least amount of control over it.

Just because someone else creates the content, that doesn’t mean you can just sit around and wait for them to write about your company or products. You have to be proactive to earn earned media. Doing newsworthy things, like launching interesting products or engaging in corporate social responsibility (CSR), gives others something to write about. When the Petersen Automotive Museum launched digital programs for students stuck at home during the coronavirus pandemic, it earned favorable press AND spurred growth in engagement, donations and memberships. When Bring A Trailer donated $28,350 from its online auctions to a charity that pays local restaurants to prepare meals for COVID-19 health workers, its CSR was a story others wanted to tell.

You can also be proactive about earned media by encouraging customers to write reviews of your products. After they make a purchase, follow up with them to ask about their experience. If there’s a problem, then you can address it quickly and earn their loyalty. If they’re satisfied, your call to action can motivate them to write a review or spread the word.

Traditional print ads, radio spots and TV commercials are expensive. And they’re a shotgun approach — you have to shoot with a wide enough reach in the hopes of hitting your target audience. Online advertising, on the other hand, can be surgically precise.

Paid media includes search ads, banner ads, paid social, paid affiliate marketing programs, advertorials and sponsored content. Another form of paid media is paying an influencer (either with money, products or both) to talk about your company. All of these are good ways to expand your company’s reach, get more clicks and generate more traffic.

The main advantages of paid media are that it can be highly targeted and you can control exactly when and where to use it. The main disadvantage of paid media is that it has the least impact on consumer purchasing behavior. Consumers know your company has paid for the promotion, so it doesn’t carry as much weight as earned media.

Remember, the different types of media support each other. Paid media is an effective way to amplify your earned media and to get the most of your owned media. And, if used wisely, paid media is money well spent. We have client case studies showing anywhere from to 439% to 1751% return on investment with paid digital marketing.

Writing a blog on your company’s website, sending out a monthly newsletter, creating a video for your YouTube channels, or posting content on your social media channels are all examples of owned media. Providing valuable, educational content — how-to videos, product overviews, tips and tricks, etc. — helps customers get to know your company and its products, and promoting such content on social media can direct them back to your website.

Paid media such as a targeted digital marketing campaign can help you push your owned media out to audiences that you might not reach otherwise. You reach out to them and your compelling content pulls them back to your website. And when you get earned media, such as a favorable write-up on a website or blog or glowing customer testimonials, you can use your owned media channels to share that with your customers and fans.

Media 3.0
As we’ve said before, the old way of doing things – buying a few ads, attending a few events, sending some press releases and waiting for results – doesn’t work anymore. That sort of full frontal assault is costly not only in dollars spent but also in opportunities missed. Media 3.0 is like guerrilla warfare, where multiple tactics are deployed at the same time and together they have an outsized impact. An effective Media 3.0 strategy that gets the most out of earned media, paid media and owned media isn’t easy, but it works.