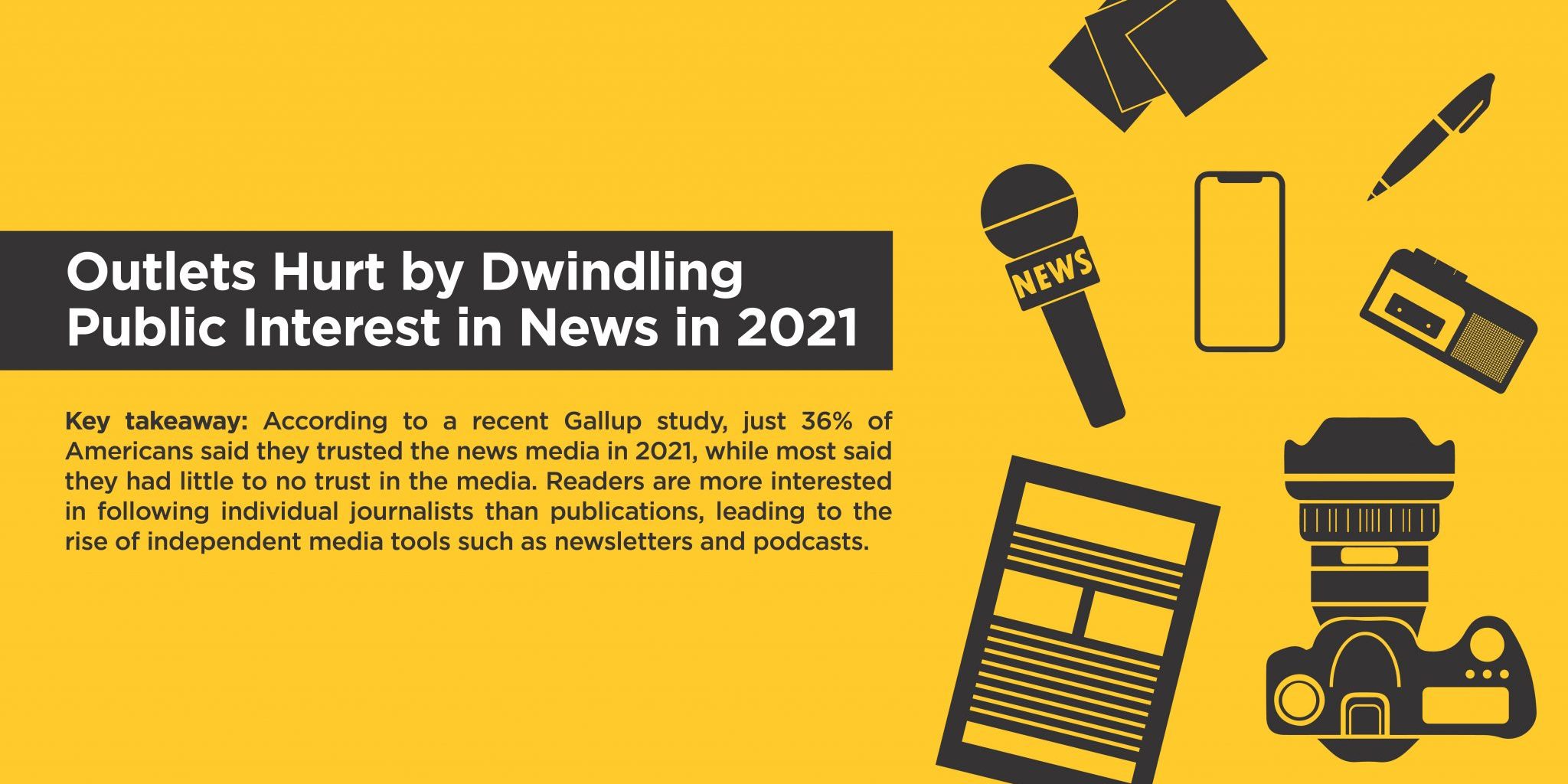 In the first week of January 2022, Bloomberg Media CEO Justin Smith announced he was leaving the company and starting his own independent publication, citing the public’s declining faith in established news media organizations. “The news industry is facing a crisis in consumer trust and confidence due to the distorting influence of social media and rising levels of polarization and parochialism,” Smith said in an email to The Wall Street Journal.

Smith is not alone in his misgivings about the state of the media industry. Many reporters are exiting their newsrooms as outlets face more skepticism and less support from the public. According to a recent Gallup study, just 36% of Americans said they trusted the news media in 2021, while most said they had little to no trust in the media.

This realization has contributed to another major evolution in how consumers prefer to get their news. Media constantly changes as new technology and trends emerge, old tech and norms become obsolete, and the public responds to those developments. Consumers dropped newspapers for radio in the 1930s, then radio for television in the 1950s, and finally television broadcasting for the instant access to news internet-based publications provided beginning in the 2000s.

Now, audiences choose to follow specific journalists rather than the outlets they work for. They might trust a particular writer’s ability to report the news the way they want or simply prefer that journalist’s voice, writing style, presentation, expertise or background. This shift also makes it easier for people to sift through the dozens of stories in their feeds every day as they are more likely to click on the pieces written by journalists they are familiar with.

Because of this shift, many writers have decided to abandon their publications in favor of independent media tools like newsletters and podcasts, which could change how news is published, viewed and shared.

NEWSLETTERS AND PODCASTS: THE RISE OF INDEPENDENT MEDIA

Several veteran journalists recently made headlines for departing their organizations in favor of independent media platforms. Casey Newton, who left The Verge last year to start his own paid newsletter, told The New York Times he did so because readers are more interested in following individual journalists than publications. Newton is not alone, however, as scores of prominent journalists are starting their own email-based newsletters.

Paid newsletters give writers the freedom to target their specific audiences and lucrative ways to continue reporting. Readers pay a monthly subscription fee to receive stories directly from the writers they follow. Hamish McKenzie, co-founder of the newsletter management website Substack, claims that writers on the platform can achieve six-figure salaries with only a few thousand monthly subscribers.

Substack allows journalists to create, publish and distribute their paid newsletters to subscribers. It doesn’t just provide writers a space to publish their work but gives them all the tools necessary to design their newsletters, view readership data, and manage their subscribers’ payments. Because of its user-friendly interface and massive resource base, Substack has become the de facto paid newsletter publishing platform and now boasts a strong list of seasoned, ex-newsroom writers.

Podcasts are another independent media channel journalists can use to make their voices heard. They provide a low barrier of entry and are simple to set up, needing only a laptop, a microphone and some talking points. These types of stories allow journalists to cover their beats in creative ways: from straightforward interviews and commentaries to outright narrative storytelling.

While some creators offer exclusive podcast episodes for paying subscribers, most make their money from in-episode ads, which have become a major player in the marketing industry. A 2021 study by the Interactive Advertising Bureau (IAB) valued advertising revenue for podcasts in the United States at $842 million. The IAB predicts revenue will eclipse $1 billion this year and reach $2 billion by 2023.

Brands have reacted to the booming podcast industry by targeting established podcasts for spot advertisements and letting hosts interview them live on podcasts. For instance, our client Lotus Cars recently went on The Smoking Tire Podcast, hosted by distinguished automotive journalist Matt Farah, to talk about the company and its products. Podcast audiences enjoy these interviews because it lets the public get to know the people behind each company, which can help consumers build more personal connections with both established and emerging businesses.

At Kahn Media, our job is to ensure that our clients are aware of changes to the media landscape and new opportunities for content distribution and marketing. We predicted the failure of the enthusiast magazine model in 2008 and were one of the first firms to help brands communicate directly with consumers.

This year is another pivotal moment for media as brands and content creators redefine the role of each platform they use. The landscape continues to evolve, and the fact that people are willing to pay for these new subscriptions means they are voting with their wallets and showing media companies how they want to consume information.

It is essential for your brand to recognize the emergence of these independent media platforms and learn how to benefit from the shift if they want to continue to stay on top of communicating with content creators and marketing to the public. Whether your business is large or small, you should seek out podcasts in your industry to go on, which will help nurture your brand’s relationship with the hosts of those shows and display the human side of your business to consumers. This will spread brand awareness and help audiences gain compassion for your brand, making them more likely to vote with their wallets for you.