Google Makes Life Easier for Digital Out Of Home Advertisers 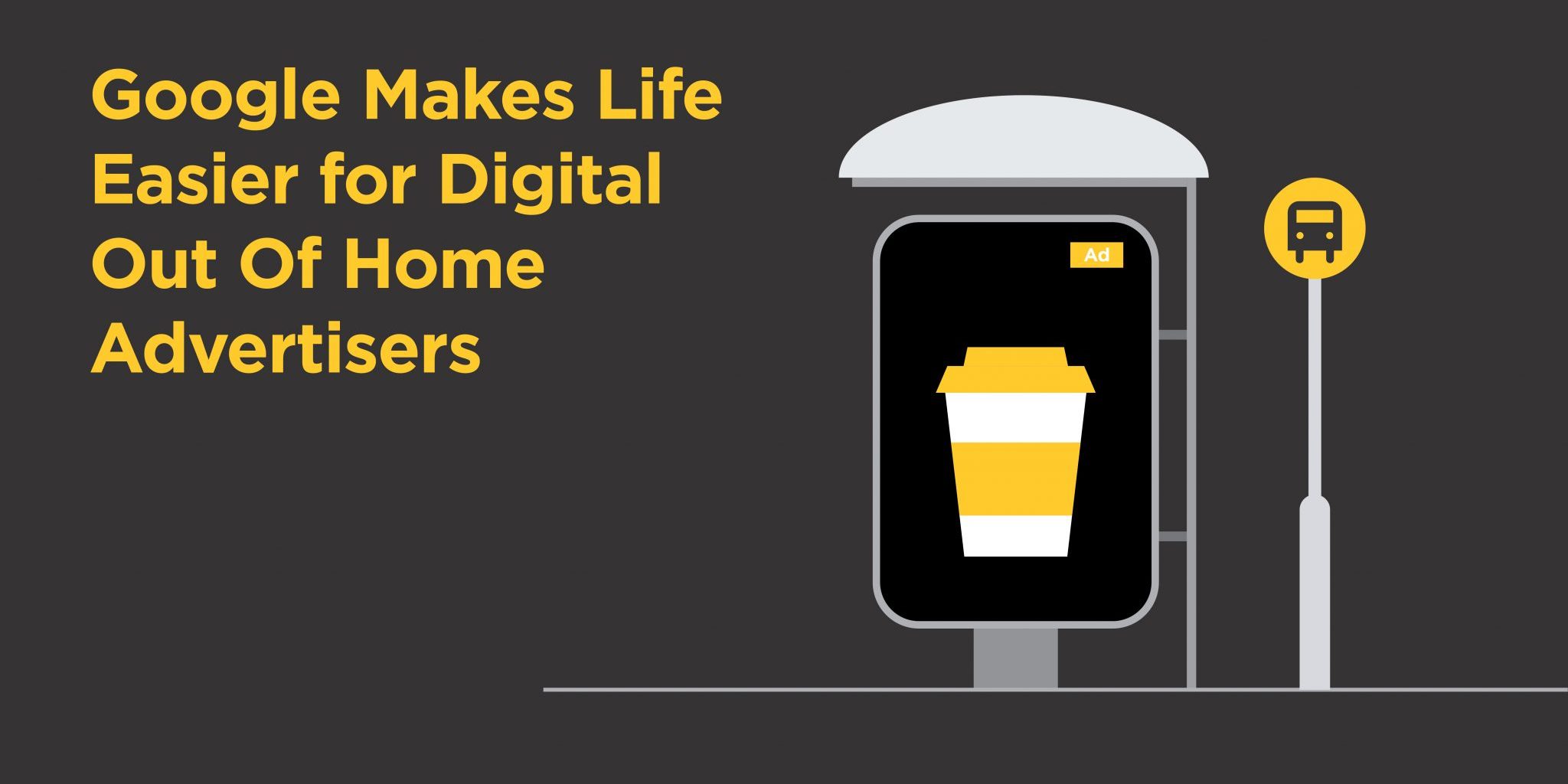 It is hard to imagine the world that existed previously to Google. Before the advent of the all-encompassing search engine, people had to laboriously sort through encyclopedias or visit the library to find information. Digging through index cards or staring at microfiche is about exciting as it sounds. It was a long, painful and often frustrating way to find anything. Google significantly simplified our lives by making almost anything available through a simple online query.

Beyond making life simpler for those thirsting for information, Google has also made things easier for marketers and brands. Platforms like Google Data Studio give valuable website analytics in an easy-to-understand format. Google Ads allows users to easily create budgets, set targets and start their ad campaigns across a variety of websites, YouTube and other mediums. Both platforms, and others offered by Google, have become critical tools for brands, large or small. Like the search engine, Google’s innovations have simplified previously labor-intensive tasks.

Google has once again made things easier for advertisers and marketers by expanding the capabilities of Display & Video 360. In addition to its other features, marketers can now use Display & Video 360 to easily access and buy digital out-of-home (DOOH) advertising across an extensive range of markets. And, like most things Google, it is simple and easy to use. Let’s take a closer look.

WHAT ARE OOH AND DOOH?

A brief introduction might be necessary for those unfamiliar with the acronyms above. Out-of-home advertising (OOH) is a fancier term for the billboards seen across highways, towns and cities throughout the United States. It also includes the smaller panels commonly seen at bus stops, on sidewalks, in public transportation or anywhere else they fit. The history of the billboard is fascinating and is covered in an excellent article on Tedium. According to it, Jared Bill is the father of the modern billboard, first using them extensively to promote Ringling Bros and Barnum & Bailey Circus in the 1830s. Soon after, billboards we painted onto the sides of buildings or placed on top of them. The massive expansion of America’s highway system in the ‘50s and ‘60s added even more space and demand for billboard advertising. According to the Outdoor Advertising Association of America (OAAA), there are over 350,000 billboards in America today.

Digital out-of-home advertising (DOOH) is the modern variant of billboards and small panels. While they are the future of billboard and panel advertising, they have yet to reach the levels of saturation seen in visions of the future, such as “Blade Runner 2049”. Currently, DOOH advertising only accounts for 26.7% of outdoor advertising. But OOH is expected to grow in the future as the impact of the pandemic lessens. And DOOH will grab a larger share of that growth as the technology improves and marketers figure out more creative and attention-grabbing ways to use it. 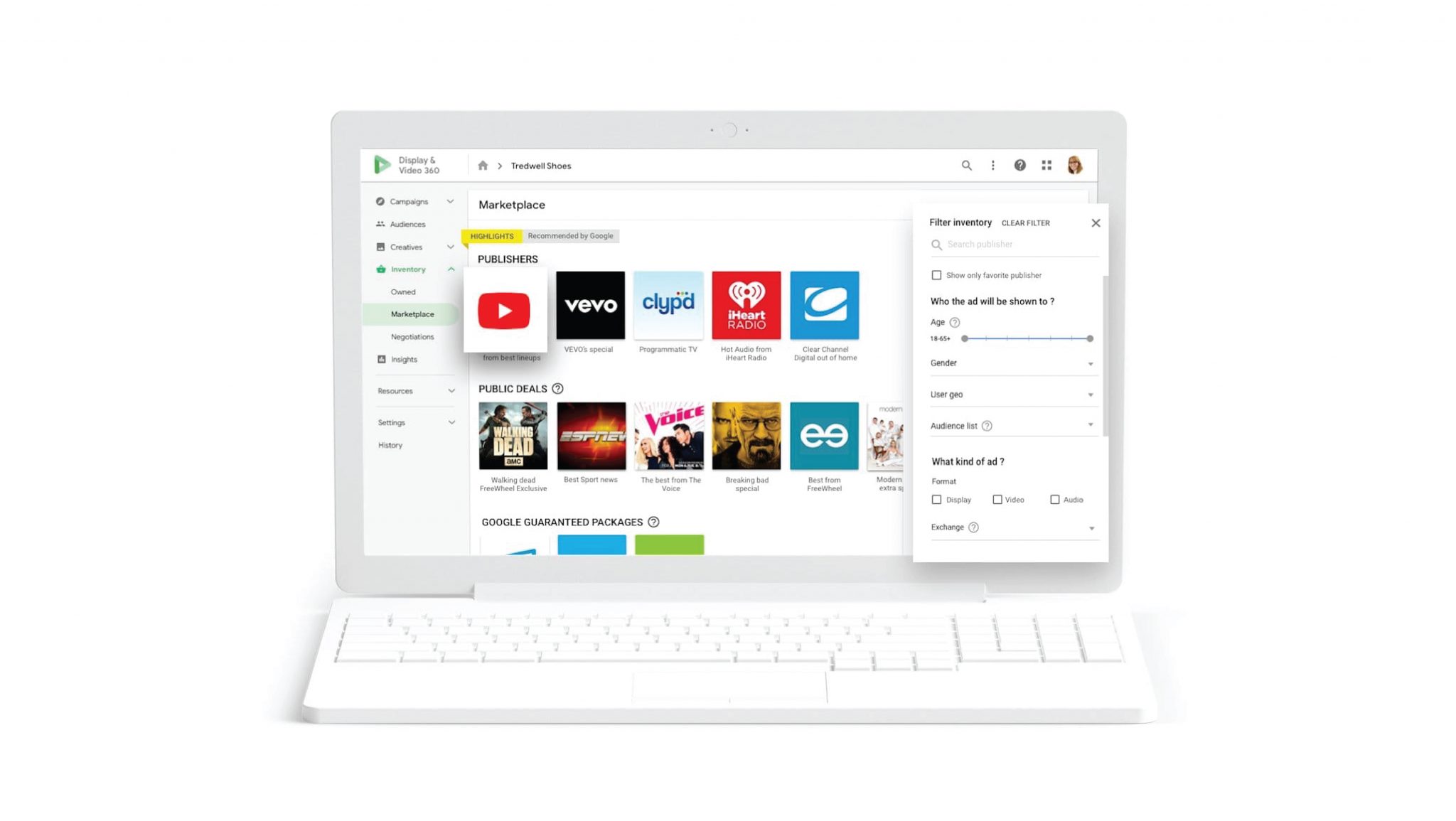 THE TRADITIONAL VS. GOOGLE’S NEW WAY OF DOOH ADVERTISING

The disadvantage of OOH advertising is that it has always been somewhat of a maze to navigate. One first had to find billboards or panels in the area they wanted to advertise in. Then they had to figure out who controlled those billboards or panels and how to contact them. With smaller sizes and a wider variety of platforms available, DOOH advertising could be even more challenging. Finding out what company controls the advertising screens and panels in JFK takes a bit of digging. And if you wanted to extend your advertising to the subways or cabs servicing JFK, it was often a separate company (or companies). All of it burned valuable time that most businesses don’t have. Some agencies specialize in OOH and DOOH advertising, but their costs can put them outside the realm of smaller and mid-size companies.

Google eliminates this headache by now integrating DOOH advertising into its Display & Video 360 platform. Instead of finding and dealing with individual companies, advertisers can manage and execute their DOOH campaigns directly in Display & Video 360 through a single dashboard. Multiple campaigns or larger ones spread across wider regions and various publishers are also much easier to manage with the new integration. Currently, DOOH advertising through Google Display & Video 360 has integrated inventory from exchanges such as PlaceExchange, Hivestack, Magnite, Stoer SSP, VIOOH and Vistar Media. The latter offers access to the thousands of options owned and operated by ClearChannel, Intersection, JCDecaux, Lamar and Ströer through partnerships with Vista Media. All of the advertising can be bought programmatically, dramatically reducing execution times. Google just made life a lot easier for DOOH advertisers.

Some might view OOH advertising as antiquated, as it has been around for a very long time. But part of its longevity and endurance is that it works. Even after the advent of social media, OOH still remains and is used successfully by marketers today. Its modernized digital equivalent DOOH also brings with it some advantages that are unique to it.

One of the most significant advantages of DOOH is that it can be done on a short-term basis. Unlike billboards or panels that must be physically swapped out, digital versions can be easily changed. Yes, some companies might require a minimum commitment for ad duration. But in theory, one could advertise for as little as a few minutes with DOOH. We doubt that short of a campaign would be effective, but the point is that DOOH offers more flexibility over its traditional brethren.

The ability to easily swap out ads also brings another advantage. Conventional billboards and panels only serve one advertisement at a time, but digital versions can serve multiple ads. Since you share the space with others, DOOH advertising is usually cheaper than OOH. And, with shorter durations possible, the cost savings can be even more significant.

DOOH advertising can also be very geo-targeted. Billboards are in fixed and sometimes not ideal locations for campaigns. While digital screens and panels aren’t as prevalent yet as non-digital versions nationwide, they often have a higher density in metropolitan areas. This plethora of locations lets you pick exactly where to serve your ads. It is possible to utilize DOOH ads in a certain radius around your store. Or you can target commuters on a specific train or subway line with customized ads. This granular level of geo-targeting isn’t possible with OOH advertising.

Some put most of their creative focus on social media or other more glamorous forms of advertising. But DOOH advertising shouldn’t be seen as a lower tier unworthy of effort as the same rules that apply to all other forms of advertising also apply to DOOH. The more creative and eye-catching it is, the more effective the advertisement. Simply dumping a static OOH ad into a digital format usually doesn’t cut it.

Taking advantage of the elements of precise geo-location and motion maximizes the impact of DOOH advertising. Advertising with moving elements will always capture more attention than static ones. And teaming that motion with the right location can make for a powerful pairing. It takes creativity, work and out-of-the-box thinking, but the results are worth the effort. Check out the video above of the amazing DOOH ad that shows a digital child looking up in wonder at a real British Airways plane as it takes off. Located in London’s Piccadilly Circus, it shows how unique a DOOH advertisement can be when executed properly.

NEEDS TO BE PART OF A LARGER STRATEGY

OOH advertising has withstood the test of time, and DOOH is sure to follow it. Neither is entirely effective on their own and needs to be part of a multi-tiered marketing campaign. Figuring out the right mix of advertising, social media, influencer outreach, digital marketing and other efforts can be difficult for any size business. But at Kahn Media, that is our specialty. We are a full-service marketing agency that excels at social media management, influencer relations, traditional and digital advertising, content creation and public relations. And we know how to combine them into effective campaigns. Contact us if you have questions about DOOH or want us to create a new campaign for you.