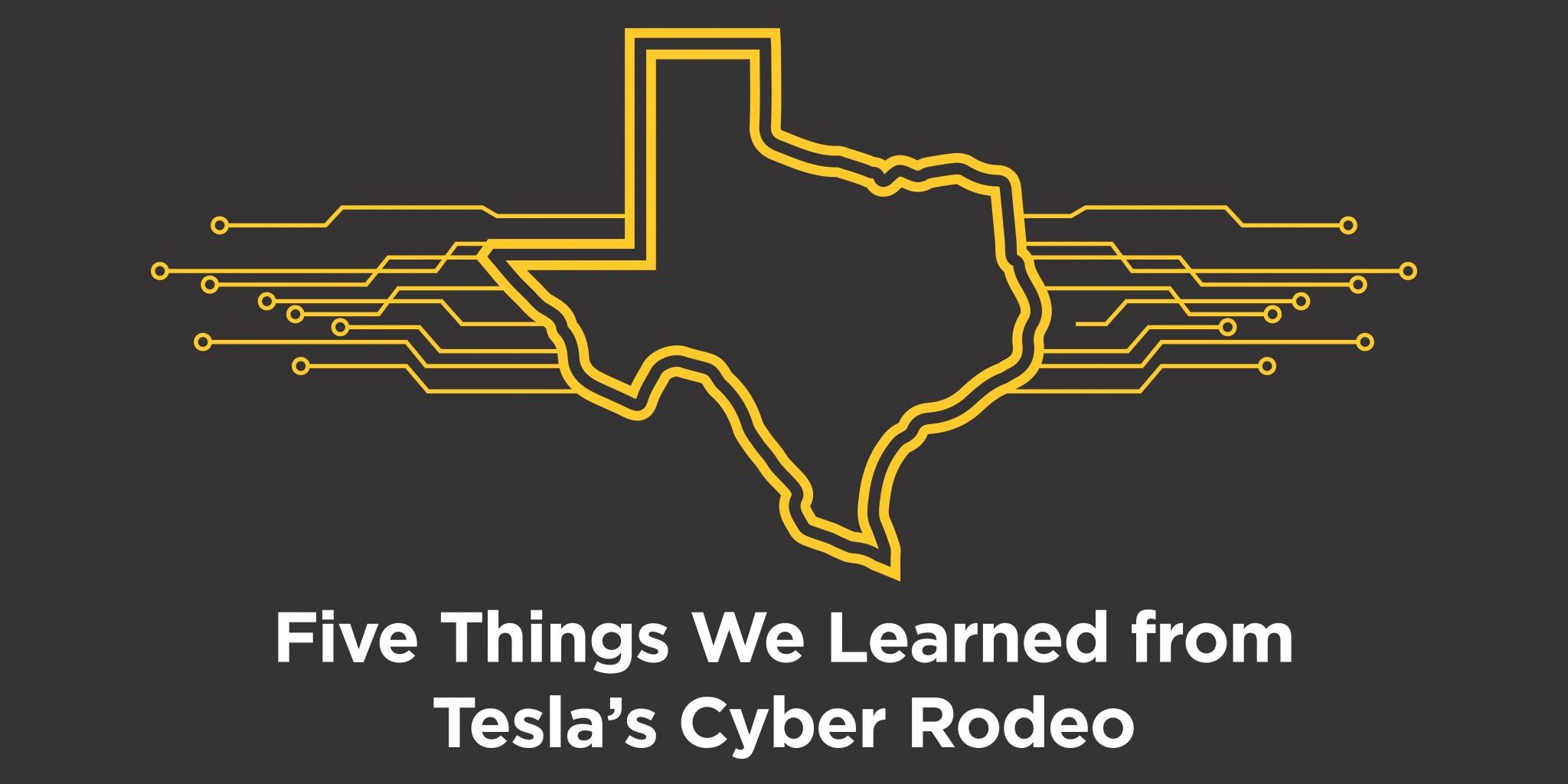 According to gushing Tesla fans everywhere and some fawning members of the media, Tesla’s Cyber Rodeo was the biggest thing to ever happen to humanity since the invention of the smartphone. Held in celebration of the opening of Telsa’s latest Gigafactory in Austin, Texas, Cyber Rodeo had the vibe of a party mixed with a press conference, a town hall and even a rave. After a lengthy drone light show, Elon Musk took the stage in front of thousands of invited adoring fans (yes, there were actual tears). His 30-minute-long keynote speech and the rest of the event were streamed live on YouTube before a giant fireworks show to Beethoven’s “Symphony No. 5” finished the night.

Like most of what Tesla and Musk do, Cyber Rodeo generated substantial media attention. But beyond all the noise, was there much to Cyber Rodeo besides Musk’s nifty black cowboy hat and sunglasses? We decided to do a deeper dive on Cyber Rodeo and go beyond clickbait headlines and the usual gushing of the Teslarati. Here is what we learned from too many viewings of the Texas edition of Elon Musk and his wild Cyber Rodeo circus.

THE MASTER OF HYPE

Love him or hate him, it is hard to argue with the fact that Elon Musk is the king of generating hype and grabbing public attention. Like a business version of Kim Kardashian, almost every move Musk makes is covered by the media hoping to generate web traffic and attract eyeballs. Even Musk’s awkward dancing at the opening of the Berlin Gigafactory somehow grabbed the attention of large media outlets (and we aren’t talking TMZ). And Musk is deftly skilled at using the media’s attention to generate free PR and coverage for his events, including Cyber Rodeo.

A big part of that appeal comes down to the personality of Musk himself. Musk isn’t a perfectly polished individual speaking in the latest CEO jargon and vague business terms. Nor does he have a cool beard, excessively mediates and walks to work like Jack Dorsey. Musk says what he means and does what he says (or attempts to). He is a big dreamer, passionate, authentic, embraces his weirdness, and people connect with that. It is hard to picture Jeff Bezos or Mark Zuckerberg pulling off something like Cyber Rodeo unless the audience was either being paid or held captive. Musk is the ultimate hype man generating media coverage wherever he goes or whatever he does.

HYPE HAS ITS LIMITS

If you are the CEO of a company or building your own brand, you should be its biggest advocate. Musk definitely is for Tesla, SpaceX and The Boring Company, always pumping up their achievements both past and future. But there are limits to generating hype, and overdoing it tends to create more eye rolls than awe. The magic eventually wears off like that budget Instagram life coach who constantly tells you how awesome you are. Cyber Rodeo was a perfect example of that. The announcements of Cybertruck, Semi and Roadster coming “sometime next year” were met with cheers from the rabid audience hanging on Musk’s every word. But these are the same products that Musk has been hyping up for a while now, with timelines that constantly shift. The only thing new mentioned was a robotaxi, but details and timelines were vague like many things Tesla and Musk.

The other problem with constantly relying on hype is that it always must get bigger to grab attention. Musk is increasingly speaking in grandiose terms and hyperbole. The Optimus robot (also coming sometime next year) will usher in “an age of abundance,” and the new factory will “be the most advanced car factory that Earth’s ever seen” and achieve scale “that no company has ever achieved in the history of humanity.” Statements like that were great for generating catchy headlines but were tellingly met with a collective yawn from Wall Street. The next day Tesla’s stock dipped by 6%.

PERCEPTION OF YOUR BRAND MATTERS

A big lesson from Cyber Rodeo should be on the massive role that brand perception plays. According to an in-depth Forbes article, Tesla ranked below Land Rover in the 2020 J.D. Power Initial Quality Survey. The results were based on new owners in 35 states as Tesla did not allow owners in other states to be surveyed. While beautiful and sophisticated, modern Land Rovers are notorious for having the build quality and reliability of a Soviet-era Lada. Ranking behind Land Rover is not good for any automotive company and could cause a series dent in brand perception.

Surprisingly, that perceived lack of quality has had no negative impact on Tesla. In J.D. Power’s Automotive Performance, Execution And Layout Study (APEAL) of the same year, which measures how owners emotionally connect to their vehicle by assessing excitement across 37 areas, Telsa achieved the highest ranking ever of any brand. While the diametrically opposed results might confuse some, the explanation is simple. People are willing to overlook (at least temporarily) any quality issues Tesla might have because they love the brand. The Forbes article sums it up best by saying, “Tesla buyers are brand believers. They believe in the electric model and its sustainability. They believe in the technology as well as the performance that the technology provides. Tesla customers believe in Elon Musk and his confidence about his ability to deliver what he promises.” Brand perception matters, and it is hard to envision many other brands generating the clearly visible excitement at Cyber Rodeo.

Charles H. Duell, the Commissioner of the U.S. Patent Office in 1899, was widely quoted as saying, “Everything that can be invented has been invented.” In fairness to the obviously now-deceased Duell, his utterance of that nonsense was later debunked. But veteran automotive marketers can fall into the same trap thinking that every marketing tactic and angle has already been tried. And that those tactics work best because they are the ones that are traditionally used the most, creating a loop of endless stagnation. Cyber Rodeo proved those assumptions are false, and there is still room for innovation.

Cyber Rodeo was a weird and eclectic mix of almost every marketing and event idea. It was a live stream merged with a press conference without the press, a public forum, a concert, an infomercial, a cyberpunk carnival, a weird art exhibit, a rave, a viral video, a keynote speech and a new product launch without any new products. This article from The Verge gives an excellent look at how much was going on at Cyber Rodeo beyond what was on the live stream (hint: it was a lot). Besides Tesla, we don’t know any other automotive manufacturer that would pull off an event like this. By mashing a bit of everything together and taking marketing ideas from other non-traditional areas (the vibe and elements from music festivals were easy to spot), Tesla created something unique and buzzworthy in the automotive space.

Tesla famously (or infamously) dissolved its public relations department in 2020. Musk has had harsh comments for the press in the past, accusing them of treating Tesla unfairly. And Tesla and Musk can generate vast amounts of media coverage without almost no effort. Both factors undoubtedly played a role in axing Tesla’s PR team. But a skilled public relations team doesn’t just talk to the media or answer their questions. They can help guide and focus the media on covering what is most important to your brand. This lack of public relations team working in the background was noticeable at Cyber Rodeo.

From a futurist, technology, investor and business standpoint, the show’s biggest star should have been the Gigafactory itself. Even with Musk’s grandiose statements set aside, the new Texas Gigafactory is a big deal. It significantly ups Tesla’s production capacity both in the United States and globally. And it positions Tesla perfectly for future growth while using innovative technology. While Musk did explain this, most media coverage went to “shinier” items like an updated Cybertruck prototype, AI-infused humanoid robots that will save humanity, drone shows, Musk’s cowboy hat or just how “cool” everything was. Only a couple of media outlets gave the significance of the factory more than just a passing mention. A skilled public-relations team could have changed that.

At Kahn Media, we are experts in media and influencer relations, well aware of the vital role of skilled public-relations specialists. Our highly-experienced team can get your company the coverage and exposure it needs to generate sales and build your brand. Contact us to see what is possible.