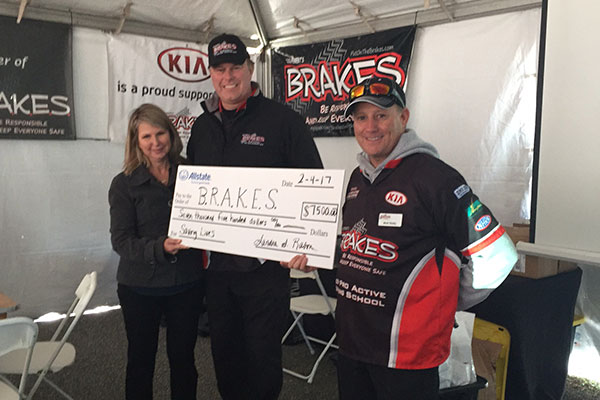 CONCORD, N.C. (February 7, 2017) — B.R.A.K.E.S. (Be Responsible and Keep Everyone Safe), a non-profit offering free defensive driver training to teens and their parents, received a generous donation from Allstate Insurance Company in the amount of $7,500 during last weekend’s B.R.A.K.E.S. driving program at the Joint Base Charleston Weapons Station, Charleston, South Carolina. The event was in honor of Tripp Rabon, who was killed on Highway 64, on December 23, 2015, after the car he was riding in hydroplaned, ran off the road and flipped into a tree.

With the help of Tripp’s family and the Dorchester District 2 School District, the community rallied together and raised enough money to bring B.R.A.K.E.S. to Charleston in the hopes of preventing another fatal teen car crash. Sandra Rabon, Tripp’s mother, is an Allstate Insurance Agent and when she approached her employer with information about the B.R.A.K.E.S. program they took swift action, showing support for the Rabon family and the importance of teen safe driving skills.

“Car crashes are the number-one cause of death among teens in this country, and we started B.R.A.K.E.S. eight years ago to try and do something about that,” said Doug Herbert, who founded B.R.A.K.E.S. after losing his two young sons, Jon and James, in a tragic car crash in 2008. “We are so grateful to have the support of Allstate Insurance, and their generous donation will help bring B.R.A.K.E.S. back to Charleston and save more lives on the road.”

“We worked around the clock to bring B.R.A.K.E.S. to Charleston. This course will help in preventing, not just surviving crashes as teens learn crash avoidance skills,” said Sandra Rabon. “The donation from Allstate Insurance brought a tremendous amount of support and honors the memory of Tripp.”

B.R.A.K.E.S. would like to make Charleston a regular stop on its nationwide tour. Please join Tripp’s parents, the Sandra Rabon Allstate Agency and other friends and neighbors in bringing lifesaving defensive driver training to Charleston.

Doug Herbert’s B.R.A.K.E.S. (Be Responsible and Keep Everyone Safe) is a 501(c)3 non-profit whose mission is to prevent injuries and save lives by training and educating teenage drivers and their parents about the importance of safe and responsible driving. The Concord, North Carolina Teen Pro-Active Driving School was founded in 2008 after Top Fuel drag racer Doug Herbert lost his two young sons, Jon and James, in a tragic car crash. Although devastated by his loss, Doug decided to turn his grief into something positive and created a driving program in the hopes of preventing other families from experiencing similar tragedy. Over 22,000 teens from over 35 different states and three countries — and their parents — have graduated from the B.R.A.K.E.S.’ intensive half-day training course, which is free of charge and features hands-on skills exercises taught by professional instructors in a fleet of new vehicles donated by Kia Motors America. The course maintains a low three-to-one student-to-instructor ration and requires a least one parent to attend with each teen. Learn more about upcoming classes and Doug’s story at: www.putonthebrakes.org.