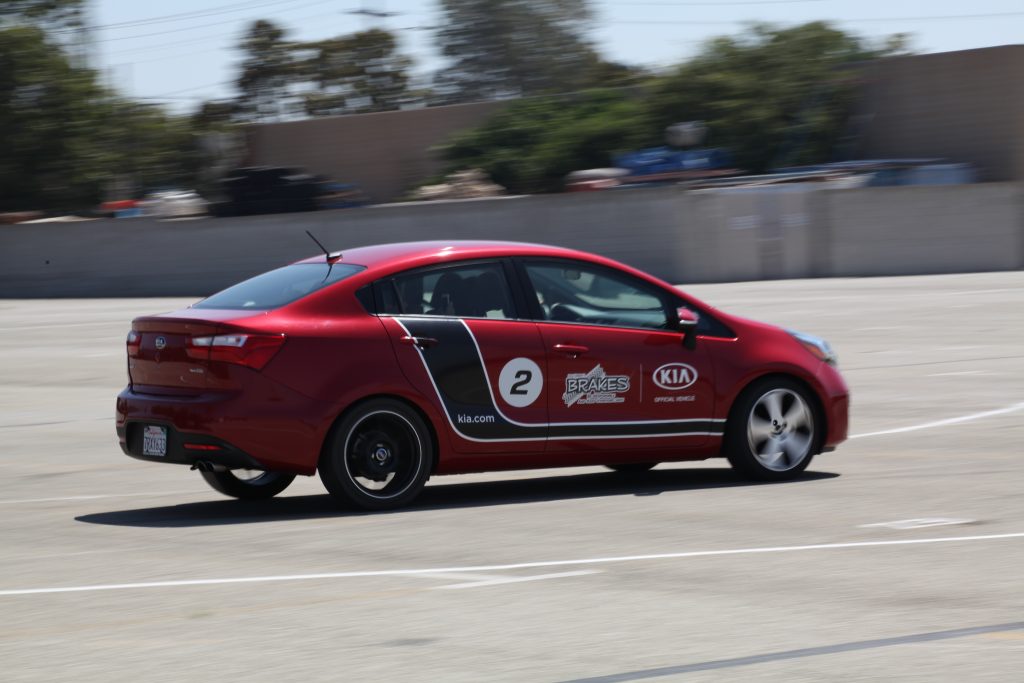 CONCORD, N.C. (August 22, 2016) – B.R.A.K.E.S. (Be Responsible and Keep Everyone Safe), a non-profit offering free defensive driver training to teens and their parents, announced a partnership with NOYS (National Organizations for Youth Safety) for its Youth Interactive Traffic Safety Lab, taking place Oct. 17, 2016, at the Rosecroft Raceway in Fort Washington, Maryland. Representatives from the National Highway Traffic Safety Administration, the National Transportation Safety Board, the Maryland Department of Transportation and Kia Motors America have been invited to help kick off National Teen Driver Safety Week.

“Car crashes are the number-one cause of death among teens in this country, and we started B.R.A.K.E.S. eight years ago to try and do something about that,” said Doug Herbert, who founded B.R.A.K.E.S. in 2008 after he lost his two young sons in a tragic car crash. “After years of hard work, we’ve trained our 20,000th student, and the program continues to build momentum. We’re thrilled to be able to bring B.R.A.K.E.S. to our Nation’s Capital for the first time, and partnering with NOYS allows us to be part of a larger effort to educate even more teens and build awareness about the importance of preparing our new drivers for emergency situations that they’ll face on the roads.” NOYS is a coalition of non-profit and youth-serving organizations,

business and industry leaders, and government agencies who work together to build partnerships that will save lives, prevent injuries, and promote safe and healthy lifestyles among all youth while encouraging youth empowerment and leadership.

“NOYS is honored to partner with B.R.A.K.E.S., a NOYS member, and provide such an exciting, enriching experience to teens in the DC, MD and VA area,” said Anita Boles, NOYS CEO. “The B.R.A.K.E.S. pro-active, advanced driving course puts expert and novice drivers together in an innovative way that helps teens improve their skills and confidence behind the wheel. While conventional driver’s education is important and valuable, B.R.A.K.E.S. goes beyond that level of training by addressing driving situations responsible for many traffic crashes involving teens. B.R.A.K.E.S. provides an invaluable experience to young drivers.”

Kia Motors America (KMA) partnered with B.R.A.K.E.S. in 2013 to educate teenagers and their parents about the importance of responsible driving. Kia is the Official Vehicle and Presenting Sponsor of the B.R.A.K.E.S. Free Teen Defensive Driving Program and provides a fleet of more than 40 vehicles. With Kia’s support, B.R.A.K.E.S. continues to increase the number of events offered and expand into new markets. “Kia is proud to serve as the Presenting Sponsor and Official Vehicle of B.R.A.K.E.S.,” said Michael Sprague, chief operating officer and EVP, KMA. “The program has proven to be effective and the skills learned within empower teens and their parents to make better, and safer decisions behind the wheel.”

For more information about the B.R.A.K.E.S. program and Doug’s story, or to register for the open-to-the-public event Oct. 15-16, 2016 at Rosecroft Raceway, Fort Washington, Maryland B.R.A.K.E.S. class, visit www.putonthebrakes.org.

ABOUT B.R.A.K.E.S.
Doug Herbert’s B.R.A.K.E.S. (Be Responsible and Keep Everyone Safe) is a 501(c)3 non-profit whose mission is to prevent injuries and save lives by training and educating teenage drivers and their parents about the importance of safe and responsible driving. The Concord, North Carolina Teen Pro-Active Driving School was founded in 2008 after Top Fuel drag racer Doug Herbert lost his two young sons, Jon and James, in a tragic car crash. Although devastated by his loss, Doug decided to turn his grief into something positive and created a driving program in the hopes of preventing other families from experiencing similar tragedy. Over 20,000 teens from over 35 different states and three countries – and their parents – have graduated from the B.R.A.K.E.S.’ intensive half-day training course, which is free of charge and features hands-on skills exercises taught by professional instructors in a fleet of new vehicles donated by Kia Motors America. The course maintains a low three-to-one student-to-instructor ratio and requires a least one parent to attend with each teen.

ABOUT NATIONAL ORGANIZATIONS FOR YOUTH SAFETY
NOYS was originally founded as the Traffic Safety Collaboration, and for its first 10 years was supported by funding from government agencies, including the Department of Transportation. In 2005, NOYS became a 501(c)(3) organization and incorporated as the National Organizations for Youth Safety, and has since grown to include over 80 national member organizations. NOYS continues to maintain a strong focus in traffic safety with support from government and business and industry, and has expanded to include other safety areas such as injury prevention, substance abuse prevention, and violence prevention.