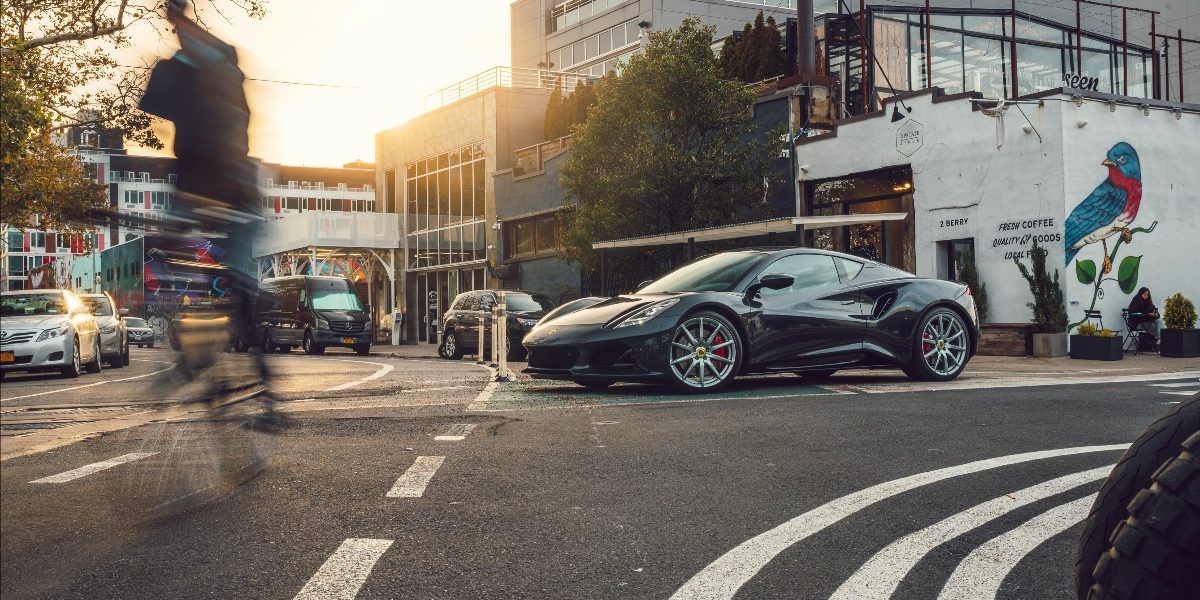 (New York – 9 November 2021) – The new Lotus Emira, the last petrol-powered car from Lotus and the best of breed, has arrived in New York City as part of its official United States tour.

The car took to Stateside streets for the first time in the Williamsburg neighbourhood of Brooklyn, N.Y. just off the East River. It will make additional stops in Las Vegas, Nev. and Los Angeles, Calif., visiting 13 cities in total before the end of the year.

The VIP New York launch event saw Matt Windle, Managing Director, Lotus Cars, welcome the Emira to the city. At an exclusive launch party, members of the press, American depositors and prospective customers had the opportunity to preview the latest Lotus sports car, most for the first time.

Matt Windle commented: “It’s fantastic to be with you in person as we kick off the Lotus Emira’s official US tour. There has always been so much love for the Lotus brand in America, and over the next few weeks customers coast to coast are going have the chance to see what an amazing car the Emira is.”

Prior to New York, the Emira had played a starring role at the inaugural Fort Lauderdale Concours in Fort Lauderdale, Fla., where Lotus Cars served as the presenting sponsor. The Emira made its US debut during Monterey Car Week this past August at The Quail, A Motorsports Gathering.

Just one month prior, the world saw the Emira for the first time during its globally broadcast debut from Hethel, UK, the home of Lotus Cars. Since then the car has been globetrotting the Middle East, with exclusive events at showrooms in the United Arab Emirates, Kuwait and the Kingdom of Bahrain. Separately a tour of UK and European retailers is well underway and will continue into 2022.

The Emira features all the hallmarks that the automotive world has come to expect from a Lotus – striking design, thrilling dynamic performance delivering best-in-class ride and handling, outstanding aerodynamics and an unrivalled experience ‘For The Drivers’.

Building on the legacy of the Elise, Exige and Evora, the Emira represents a quantum leap forward for Lotus. Those instantly recognisable brand signatures and core values have been combined with a paradigm shift in levels of practicality, comfort, functionality and technology. The Emira has been developed on a new lightweight bonded aluminium chassis – technology pioneered by Lotus and which remains an intrinsic part of the company’s sports car DNA.

Exterior details include LED lights all round, a titanium exhaust finisher, heated power-fold door mirrors and rear parking sensors. The Lower Black Pack is fitted as standard, which means the front bumper air blades, front splitter, side sills and rear diffuser are all in finished in gloss black.

The First Edition comes in one of six vibrant paint colours: Shadow Grey – as seen in the today – plus Seneca Blue, Magma Red, Hethel Yellow, Dark Verdant and Nimbus Grey. More colours will be available during 2022.

There are seven interior colour choices, all available at no extra cost. They are red, black, grey and tan Nappa leather, as well as black Alcantara with either red, yellow or grey stitching. Satin chrome trim finishers, white interior mood lighting and Lotus-branded sill kick plates complete the premium look.

For more information on the Lotus Emira, plus a configurator to spec and order your V6 First Edition, please visit www.lotuscars.com

Group Lotus is based in Hethel, Norfolk, UK – home to its sports and hypercar manufacturing operations, Lotus Advanced Performance Centre and the iconic 2.2-mile test track. It is part of Geely Automotive, the fastest growing automotive group in the world. Geely has a 51% controlling stake, with 49% owned by Etika Automotive, a Malaysian conglomerate.

Lotus Cars builds world-class, high-performance cars, born out of legendary successes on the race track including 13 FIA Formula 1 world titles and many other championship honours. In July 2021 it unveiled the all-new Lotus Emira, its last and best-of-breed petrol-powered sports car. The first customer cars will be delivered in 2022. In July 2019 it launched the Evija, the world’s first all-electric British hypercar.

Lotus Engineering provides a comprehensive consultancy service which works with many of the world’s OEMs, Tier 1 suppliers and other clients outside of the automotive sector. It is internationally recognised for its long-standing contribution to ground-breaking engineering and vehicle development. An international consultancy with offices around the world, Lotus Engineering is headquartered at the Lotus Advanced Technology Centre on the University of Warwick’s Wellesbourne Campus in the UK.