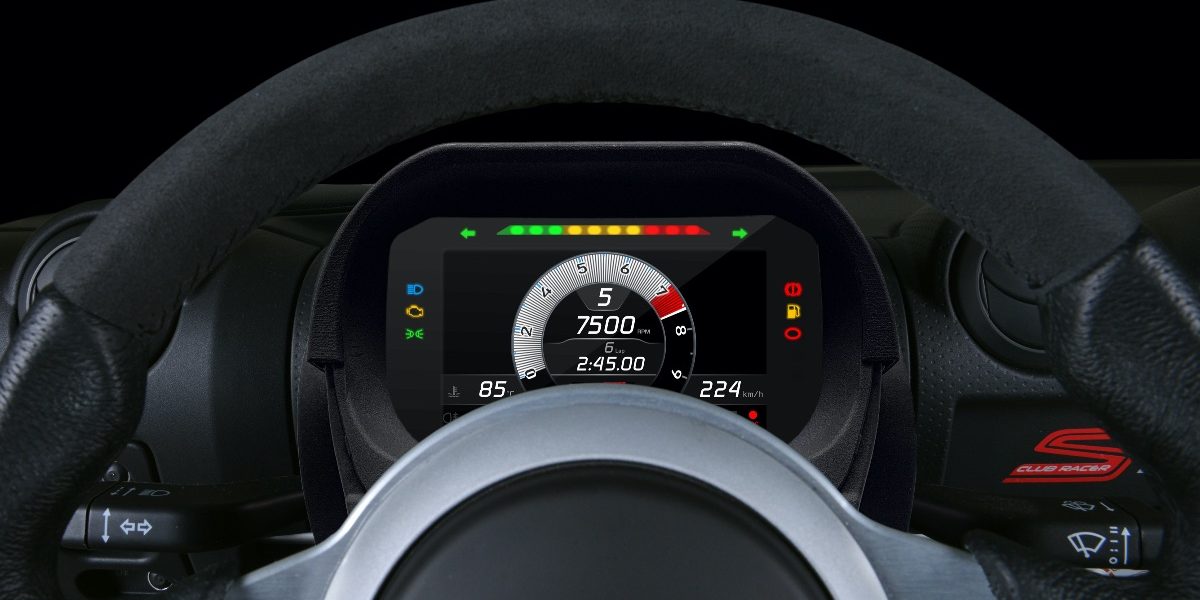 (Hethel, UK – 14 July 2020) – Lotus has launched an all-new ‘plug and play’ Digital Instrument Pack that’s pre-loaded with details of more than 4,000 race tracks from across the world.

The perfect illustration of how Lotus is always ‘For The Drivers’, the digital dashboard features integrated GPS technology and lap performance indicators, allowing track day fans to measure, display and record data to perfect their racing lines and lap times.

Designed for Lotus Elise and V6 Exige models built from 2008 onwards, the system’s software comes pre-loaded with details of 4,127 race tracks and automatically recognises when drivers are near a circuit. Drivers can download the start/finish line co-ordinates so they can calculate lap times, then analyse their performance in real time on the digital display or later by downloading data to a laptop.

A unique Lotus-branded start-up screen further enhances the experience, and users can also customise the display of the high-contrast six-inch TFT screen to suit their needs. The system even features a camera input, allowing drivers add a portable action camera to capture the action from each exhilarating lap.

Chris Hinks, Aftersales Director, Lotus, said the Digital Instrument Pack is designed for drivers who want to take their Lotus track day experience to the next level. He commented: “We know our customers appreciate the motorsport heritage of Lotus cars and love to use their own vehicles on track days. Integrating a Digital Instrument Pack into an Elise or Exige is only going to enhance that experience.”

The Digital Instrument Pack has been carefully designed to fit seamlessly into the Elise or Exige dashboard, replacing the original factory-fit instrumentation. It is available in international markets where the two cars are sold. At UK Lotus retailers it is priced £1,470 including VAT and a fitting service is available at an extra cost. When fitted by a Lotus retailer the pack is covered by a two-year warranty. Prices in other markets will vary.

Lotus owners can now also take advantage of a number of other aftersales packages, including fixed price scheduled servicing and on brakes and clutches. All parts purchased and fitted by an authorised Lotus retailer are now covered by a 24-month / unlimited mileage parts warranty.

Group Lotus is based in Hethel, Norfolk, UK. It is part of Geely Automotive, the fastest growing automotive group in the world. Geely has a 51% controlling stake, with 49% owned by Etika Automotive, a Malaysian conglomerate.

Lotus Cars builds world-class, high-performance sports cars including the Evora, Elise and Exige ranges. In July 2019 it launched the Evija, the world’s first all-electric British hypercar. Production will start in 2020.