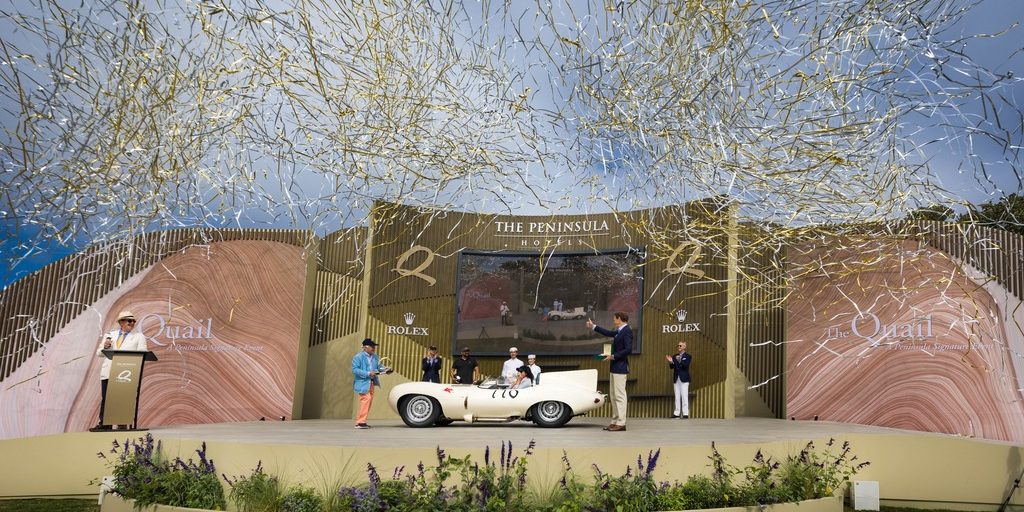 The preeminent automotive lifestyle event, which took place at Quail Lodge & Golf Club during the famed Monterey Car Week, featured a breathtaking gathering of the world’s finest collectible cars, exquisite fine dining and the most iconic figures in motorsports

Carmel, Calif. (August 19, 2022) – Competing against an elite field of over 200 entrants, the stunning 1956 Jaguar D-Type was awarded “Best of Show” at this year’s The Quail, A Motorsports Gathering. The winner of the paramount award was announced during the annual gathering of automotive enthusiasts, industry principals, celebrities and motorsports greats on the beautiful grounds of Quail Lodge & Golf Club. The winning vehicle was inducted into the Rolex Circle of Champions alongside the event’s individual class winners.

Owned by William Pope, the 1956 Jaguar D-Type, was selected for the highest honor due to its superb construction, design, attention to detail, workmanship and extensive restoration process. Jaguar took victory at Le Mans three years-in-a-row from 1955 – 1957 with the D-Type and it is rumored that only 75 examples were built.

Other prestigious award winners announced at 2022’s The Quail, A Motorsports Gathering include:

Three featured classes were celebrated at this year’s event. The “50th Anniversary of the BMW M Division” class showcased the best examples of street and racing vehicles from BMW’s famous high-performance subsidiary. “All Things MINI” saluted the evolution and heritage of the original Mini Cooper and its many variants created by the legendary John Cooper. And “70 Years of Jaguar and Their Wins at Le Mans” commemorated the illustrious brand’s seven wins at one of the world’s premier and most challenging endurance races. The special class also marked Jaguar’s first win at the 1951 24 Hours of Le Mans with the iconic Jaguar C-Type Roadster.

“This year’s The Quail, A Motorsports Gathering was our best yet,” said Kai Lermen, General Manager of Quail Lodge & Golf Club. “The unique combination of the beautiful atmosphere of Quail Lodge & Golf Club, the most exclusive collector and modern cars worldwide, and extraordinary gourmet food and beverage make The Quail, A Motorsports Gathering one of the world’s most renowned automotive lifestyle events. We look forward to next year’s gathering when we will celebrate our 20th anniversary.”

About The Hongkong and Shanghai Hotels, Limited (HSH)