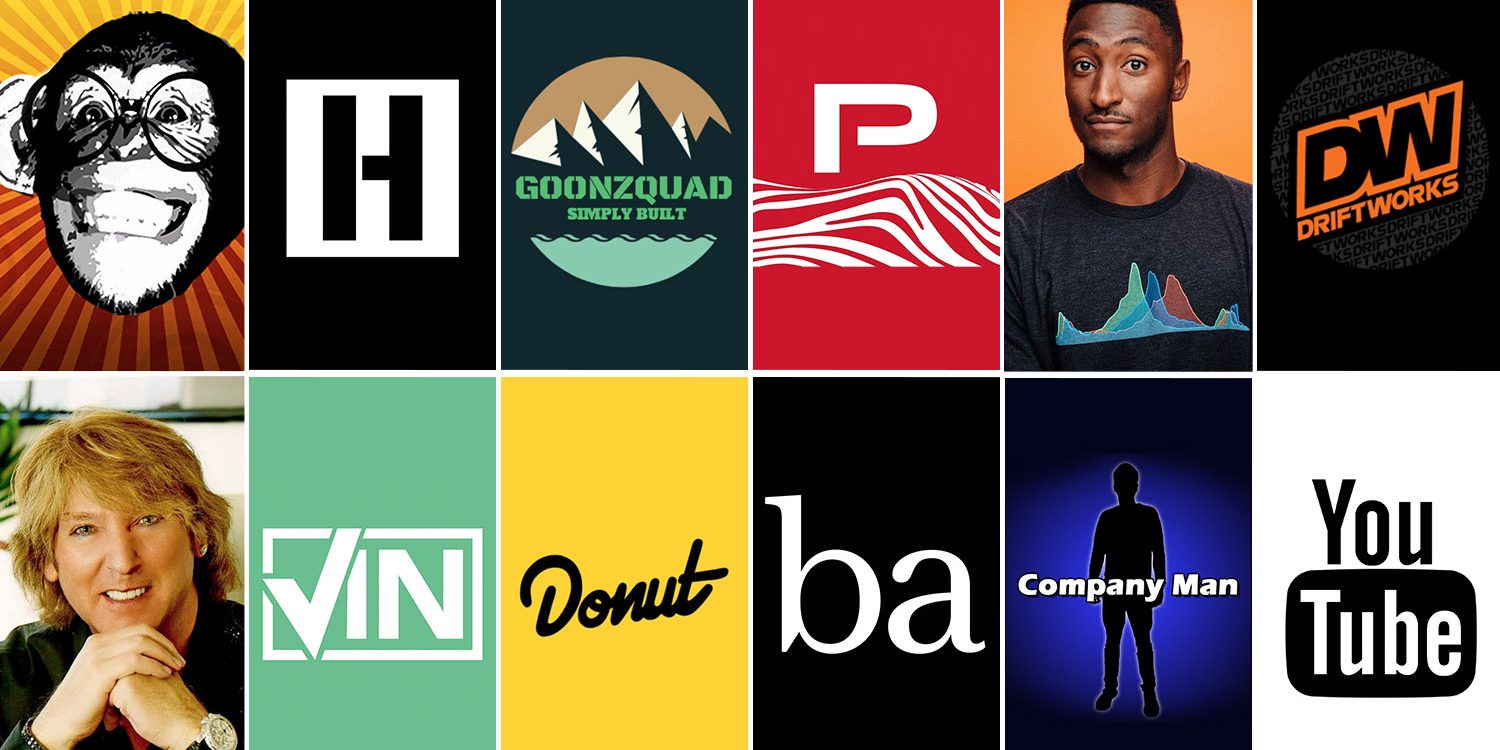 The YouTube space is more saturated than ever, and from our perspective, that’s a great thing. Creators are producing fresh, exciting and innovative content, all while targeting niche audiences with high levels of engagement. According to Hootsuite, YouTube has seen over 2 billion logged-in monthly users since the start of 2020. Even more staggering is that every minute, over 500 hours of video are uploaded to the site.

The subcultural nature of the platform, afforded by its ever expanding content, ensures that YouTube offers something for everyone. All that choice is wonderful, but it can also be overwhelming. If you want to enjoy some of the best content on YouTube right now, then you should follow these 11 channels.

Company Man covers the interesting backstories of some of the most famous companies, mergers, ad campaigns and scandals in the business world, analyzing what worked and what didn’t in an easy-to-watch infographic format. Some of the channel’s most popular series include Why Two Names?, which looks at why certain companies brand themselves differently in different regions; Why They’re Hated, which breaks down how companies lost the public’s trust; and The Rise and Fall…And Rise Again, which looks at former success stories that fell on hard times but later turned things around. Company Man proves to be both interesting and educational, making you both a more responsible consumer and better business professional.

The Goonzquad is composed of brothers Billy and Simon, two automotive enthusiasts who bring dream cars back to life. A rebuilder channel is nothing new on YouTube, but the Goonzquad approach to saving salvage cars is unique. Based in Chattanooga, Tennessee, the Goonzquad boys have been at the forefront of the rebuild trend for some years now. They specialize in what they call “almost OEM,” doing their best to return crashed cars to showroom condition. Billy and Simon work at an incredibly fast pace, turning out videos of about 20 minutes almost every other day. They generally work on two builds at once to keep their content flowing: currently, they are rebuilding a 2020 Toyota Supra Launch Edition and a roll-over Jeep Grand Cherokee Trackhawk. You can binge their older builds as well, which include a C7 Corvette Z06, Lamborghini Huracán, Ferrari 458 Spyder and more.

Donut Media takes dense history and mechanical information, and presents it in a way that is both educational and fun. The channel features a number of series that deep-dive into topics that car enthusiasts love, doing so with comedy, artful editing and inside jokes that will keep you coming back every week (Lightning!). Standout series include Up To Speed, an animated show where host James Pumphrey tells you everything you need to know about your favorite cars. Currently, Donut has produced 156 episodes (and counting) of Up To Speed, with episodes covering everything from El Camino to RUF. Donut’s other series Bumper to Bumper sees the Donut crew talk you through the interesting details of a specific car, breaking down what makes it special, such as this episode about the Classic Recreations Mustang Boss 429.

For anyone with a taste for the finer things in life, Michael Blakey’s YouTube channel will tickle your fancy. Blakey takes his viewers all over the world, reaching a new pinnacle of luxury with every video. Blakey visits some of the world’s most expensive jewelry and watch stores, homes and mansions, garages, airplane hangers and more. Whether you are a watch fanatic, supercar lover or real estate junkie, Blakey offers something for every luxury lover. If you like going behind the scenes and seeing some of the more lavish things in life, we recommend checking out Blakey’s channel for envious content.

VinWiki is an app founded in 2016 with the goal of tracking the history of rare, exotic and even everyday cars by their VIN. Founder and CEO Ed Bolian is a Cannonball record holder, former exotic car rental company owner and past sales director at a Lamborghini/McLaren/Aston Martin/Lotus dealership in Atlanta. His time in the automotive community has resulted in some wild adventures (and misadventures), prompting him to start a YouTube channel for VinWiki where he could share his experiences. On the popular series Car Stories, Bolian and his friends recount their craziest experiences, many of which will leave you on the edge of your seat until the very end. The series currently has 796 stories and counting, featuring personalities such as famed racing driver Randy Pobst and the ever entertaining car broker, “Rabbit.”

Bon Appétit Magazine has been in publication since 1956, but the company’s YouTube presence has given the culinary brand a fresh feel that appeals to everyone from the master chef to the takeout connoisseur. The BA Test Kitchen is home to some of the channel’s most loved series, including Gourmet Makes, where pastry chef and gastronome Clair Saffitz makes homemade, high-quality renditions of some of your favorite snacks and foods. So far, Saffitz has cooked up gourmet Cadbury Creme Eggs, Pizza Rolls, Girl Scout Cookies and more. At the end of each episode, Saffitz runs you through the recipe in case you are brave enough to take on the challenge. BA’s other series, It’s Alive! with Brad Leone, breaks down the science of some of your favorite foods, including Mustard, Olive Oil, Yogurt and more. Whether you’re an experienced cook or baker wanting to learn some new skills or just genuinely curious about cooking, the BA channel provides easy-to-watch episodic series with a loveable cast of characters.

Driftworks is a U.K.-based company that has only recently entered the YouTube realm, but the quality and depth of its content is truly unmatched and we can’t wait to see their following grow. Founder and owner Phil Morrison has an incredibly unique taste in cars, with his channel covering his and his friends’ builds. Driftworks delves into the nitty-gritty details of creating truly custom cars, covering subjects like steering geometry for custom control arms and steering rack swaps, carbon fiber molding for bespoke widebody panels, dry-sump oiling conversions for engine swaps and so much more. Phil’s personal cars featured on the channel include his S85 V10 swapped E46 BMW M3, RWB Porsche 911 and GT1 converted Lamborghini Murcielago LP640 (with manual transmission, rear-wheel-drive and independent throttle body conversions). Other cars on the channel include an LT4 swapped Aston Martin V8 Vantage and 1,000+ horsepower turbo SN95 Mustang.

For the tech obsessed or tech challenged, Marques Brownlee is an aficionado who makes learning about the latest and greatest technology amusing, informative and digestible. Many of us here at Kahn Media turn to Brownlee’s videos for advice on our next phone, laptop or other tech purchase, always walking away with a better understanding of the product and whether it suits us. It helps that Brownlee has a great relationship with many of the biggest tech manufacturers in the world, meaning he is often one of the first to break the news on products and walk his viewers through the ins and outs of their design. Whether you need to learn how to get the most out of your current tech, are shopping for new tech or simply love learning about the latest innovations in the industry, we highly suggest browsing Brownlee’s channel.

The crew at Hoonigan defines a Hoonigan: “1. A person who operates a motor vehicle in an aggressive and unorthodox manner, consisting of, but not limited to, drifting, burnouts, doughnuts as well as acts of automotive aeronautics. One who hoons.” As the name suggests then, the Hoonigan channel is all about having fun. The famous Burnyard has hosted some of the craziest cars in the hobby, with everything from a chopped-in-half front-drive Volvo to Ken Block’s 1,400-horsepower twin-turbo Mustang. That’s not to say, however, that the content isn’t highly educational as well. In addition to detailed walk-throughs on the Hoonigan team builds, the crew also shows viewers some of the craziest builds in the world on its popular series Build Biology. Covering everything from a Trans-Am race car to a barn-find twin-turbo Porsche to SpeedKore’s all-carbon-fiber 1970 Dodge Challenger, Build Biology never ceases to bring something new and entertaining to the garage. Although a bunch of Hoons, you can always expect to walk away from a Hoonigan video with more knowledge than you came with and a desire to have some good-old rowdy fun.

The Petersen Automotive Museum is considered not just one of the best automotive museums in the world, but one of the best museums, period. Although the Petersen has had a YouTube channel for some years now, the way in which the museum used its platform at the onset of the coronavirus pandemic secured them a spot on our list. When it was announced that museums would be closing for public safety reasons, the Petersen decided to bring their exciting exhibits into the homes of the public, quickly mobilizing a YouTube campaign to do so. Its series that includes the Ultimate Collection Tour, which guides viewers through some of the most incredible and rare car collections in the world, and Automotive Deep Drives, which educates viewers on the history of some of the most iconic and influential cars ever made, virtualize the museum experience in a way that is educational, fun and above all else, safe. And in August it will host Petersen Car Week entirely on its YouTube channel. The Petersen’s following is growing fast and we suggest tapping that subscribe button for great automotive content.

Philip James DeFranco is the host of The Philip DeFranco Show, a YouTube news channel where DeFranco comments on current events in politics, pop culture and more. DeFranco joined YouTube in 2006, and has amassed a large following that turns to him for insightful unbiased commentary on the latest happenings the world over. DeFranco’s approach to news is simultaneously earnest and entertaining, with a great deal of emphasis placed on his audience and their interaction with the news he delivers. The key to any successful YouTube channel is consistency, a practice DeFranco mastered early on. He has created over 1,300 daily news videos and counting, with videos running roughly 20 minutes each. If you’re looking to stay informed, we recommend this easy watching as a way to do so.

CONTINUE READING: KM 101: How to Use YouTube to Drive Sales