Documentary exploring the closest and most controversial sports car racing victory of all time debuts on 50th anniversary of Ford’s historic 1-2-3 victory at the 1966 24 Hours of Le Mans.

Los Angeles, Calif. (June 18, 2016) – In a war fought by titans of industry – one from Michigan, the other from Maranello – on the roads of rural France, the battle for sports car supremacy came to a head in 1966 when three of Ford Motor Company’s GT40s beat Ferrari at the 24 Hours of Le Mans in the closest endurance racing finish of all time. Exactly half a century later, “8 Meters,” a new documentary produced by Kahn Media, explores what really happened on those final, fateful laps.

In 1966, three Ford GT40 race cars crossed the finish line at the 24 Hours of Le Mans in a photo finish, with the black and silver car driven by Bruce McLaren and Chris Amon neck-and-neck with the blue car driven by Ken Miles and Denis Hulme, handing Ford and America its first victory at the most famous endurance race in the world. Yet moments later, amid mass confusion from the crowd and the drivers themselves, officials led McLaren and Amon to a makeshift podium to claim victory, while Miles – who had already won Daytona and Sebring that year – lost his shot at the Triple Crown of Endurance racing.

“8 Meters” also reveals historical footage from the development of the Ford GT racing program and a rare behind-the-scenes look at the young men who risked everything to bring America its first Le Mans championship, thanks to rare photos captured by Friedman before he went on to a tremendously successful career in Hollywood.

The film was shot at locations around the world, including The Petersen Automotive Museum in Los Angeles – which has one of the only GT40 MkIII’s as well as a 2017 Ford GT prototype on display, at Irvine, California based Superformance LLC, which manufactures absolutely stunning GT40 MkI and MkII continuation cars, as well as in New Zealand, Michigan and Willow Springs International Raceway.

Viewers can watch “8 Meters” here, or by visiting Petersen.org.

Superformance is a distributor of Complete Continuation and reproductions of 1960’s race and street cars and has earned a reputation for attention to detail, quality craftsmanship, fit and finish and customer service. Its products are endorsed by licensees from trademark holders and are manufactured using all new parts factory assembled to ensure continuity and consistency. All GT40 sales are recorded in the Shelby World registry. Learn more at www.Superformance.com. 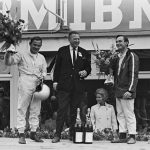 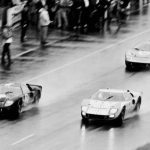